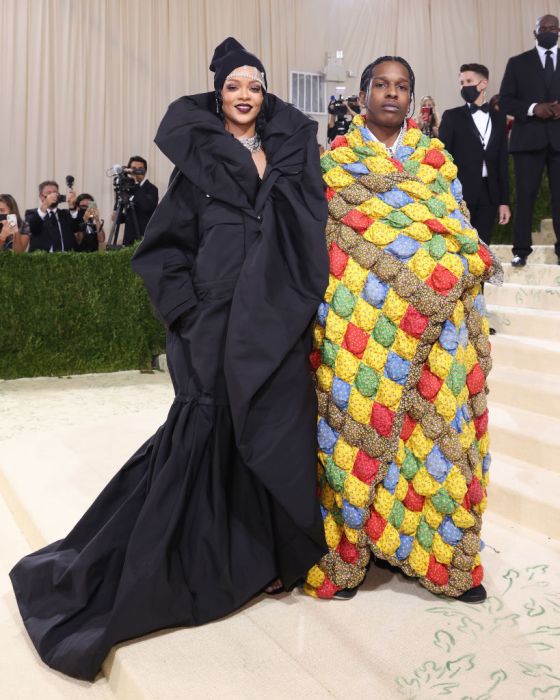 (NEW YORK) — Billie Eilish went full glam in a huge peach ball gown at the pandemic-delayed Met Gala on Monday night, while fellow host of the evening Amanda Gorman was breathtaking in cobalt blue custom Vera Wang with a diamond laurel wreath in her hair.

Rihanna, ever the Met Gala queen, showed up late in a huge black Balenciaga look and hat accompanied by A$ap Rocky in a multicolored quilted number. She wore over 267 carats of Bulgari diamonds, including two choker necklaces.

Co-host Timothée Chalamet raced onto Fifth Avenue to take selfies with fans before walking up the steps of the Metropolitan Museum of Art for his entrance after a marching band and gymnast Nia Dennis kicked off the long-awaited evening. Last year’s gala was canceled due to the pandemic.
[time-brightcove not-tgx=”true”]

This year’s official theme of the fundraiser for the museum’s Costume Institute was “American Independence,” leaving plenty of room for interpretation. Just ask Lil Nas X, who did a Lady Gaga-esque strip tease on the carpet in gold Versace, from cape to armor to embellished jumpsuit.

Eilish, the belle of the ball, wore Oscar de la Renta. She told Vogue: “It was time for this. I feel like I’ve grown so much over the last few years.”

Chalamet had Converse sneakers on his feet but diamonds on his look. Chalamet called his look, including Rick Owens sweatpants, as “a bit of everything,” just like America. Alfonso Navas, the fashion editor for Esquire, lauded his fashion choices as a “a smart play on the theme by interpreting American icons in sportwear.”

Clayton Echard: I'm So Nervous to Be The Bachelor!

Gorman’s dress, which included more than 3,000 hand-sewn crystals, was made to evoke a starry night sky. She told Vogue she felt like Lady Liberty, reimagined. Her crown, the star poet said, was a nod to publishing. Another of the hosts, Naomi Osaka, wanted to celebrate all her cultures — Japan, Haitian and the U.S. — and picked a Louis Vuitton gown designed in collaboration with her sister, Mari Osaka. It was a swirly blue, aqua and purple print with long black ruffle sleeves and a wide red sash.

If this gala produced a trend, it’s huge statement sleeves, with some stars and stripes thrown in. There was a smattering of red, as in the red, white and blue of the American flag. Karlie Kloss wore red Carolina Herrera with huge ruffles at the neck and sleeves. Jennifer Hudson also chose red sans sleeves.

Also in red: Ella Emhoff, the daughter of the country’s second gentleman, Doug Emhoff, and Vice President Kamala Harris. She wore a bodysuit and high-shine trousers by Stella McCartney with a sheer top and a crystal design in all the right places. She …read more

Nicki Minaj got Covid, she’s isn’t vaccinated & she wouldn’t get it for the Met Gala

Meredith Marks Mocks Jen Shah: WHY is She Still Filming Under Indictment?

Britney Spears deleted her Instagram days after her engagement