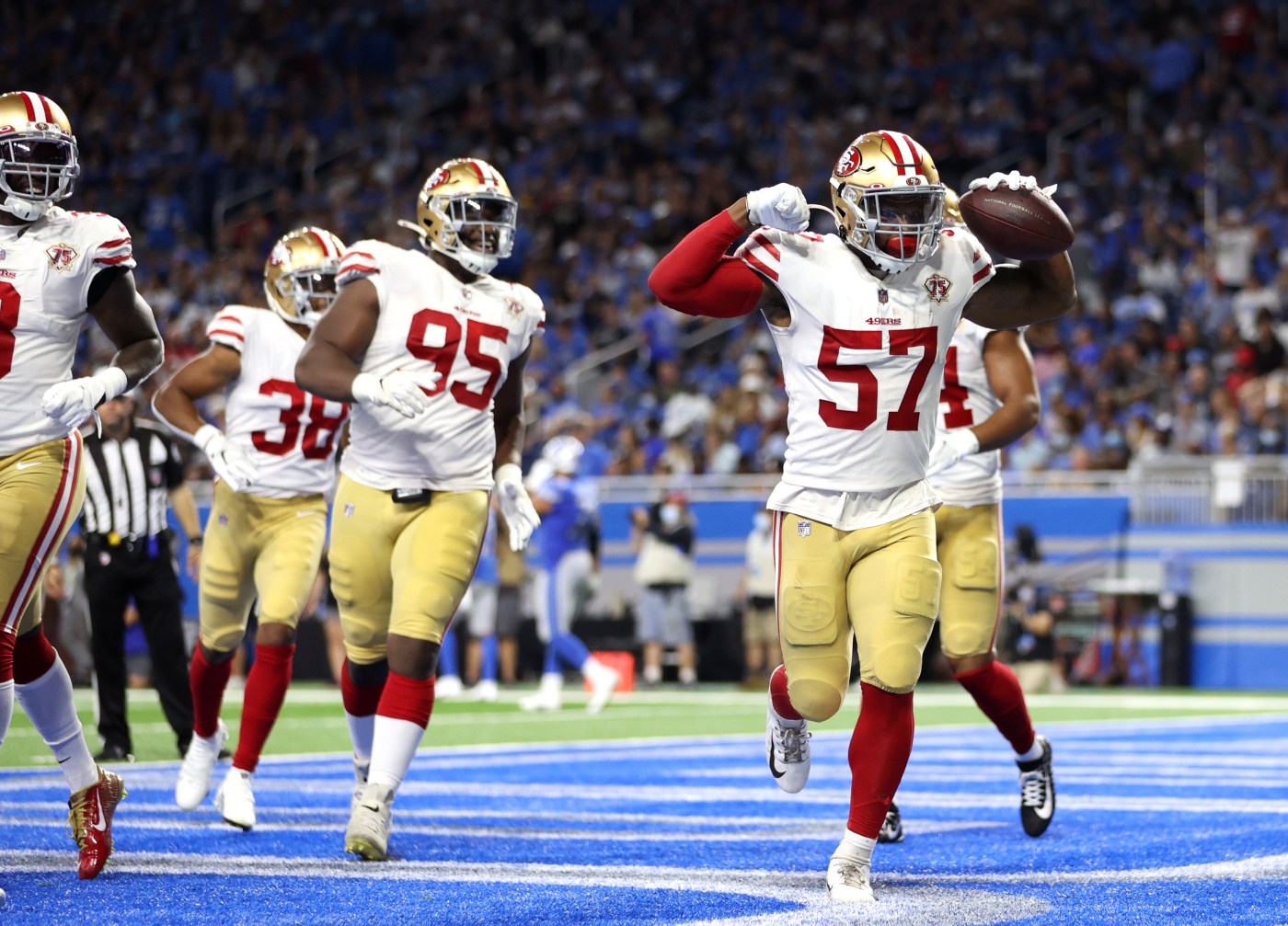 DETROIT — Opening the season with a high-scoring win over the Detroit Lions was expected.

Unexpected: the 49ers nearly choked it all away.

The 49ers piled up just enough points to escape a hideous, injury-strewn fourth quarter for a 41-33 win.

There were personnel surprises along the way: wide receiver Trent Sherfield seized most of Brandon Aiyuk’s reps, and Elijah Mitchell emerged as a 104-yard rookie rusher instead of Trey Sermon, a third-round pick and healthy scratch.

There were familiar sights, too, such as Deebo Samuel (189 receiving yards) and George Kittle (78 yards) making open-field moves, and an elite pass rush that got a sack apiece from Nick Bosa and Dee Ford in their return from 2020 injuries.

The 49ers didn’t escape unscathed. Knee injuries took out running back Raheem Mostert early and cornerback Jason Verrett late. Dre Greenlaw left with a groin injury from his interception return for a touchdown, and fellow linebackers Azeez Al-Shaair and Demetrius Flannigan-Fowles limped off in the closing minutes.

So it wasn’t perfect, from Garoppolo fumbling away the first snap of the season, to the run defense caving a bit too much, to the Lions’ fourth-quarter rally.

But it came with the 49ers’ most season-opening points since a 49-7 win in Dennis Erickson’s 2003 coaching debut. The top takeaways:

Garoppolo and Lance didn’t swap places as often as the preseason finale two weeks ago, and Lance only played four snaps. He entered for two snaps on the opening touchdown drive and didn’t get in again until a third-quarter, third-and-20 run for a 2-yard gain. Lance’s fourth snap was a predictable third-and-1 keeper that got stopped for a 1-yard loss late in the third quarter.

Milley: Calls to China were `perfectly' within scope of job

This was more Garoppolo’s show, and he combined with Samuel for the play of the day: a 79-yard touchdown catch-and-run on a third-down heave. As Samuel raced toward the goal line, Garoppolo was helping up one of the Lions defenders who drilled him on the throw, and it was Garoppolo who comforted the defender with a pat on the helmet.

Garoppolo kept alive the 49ers’ first touchdown drive of the season, and it was Lance who finished it off with a 5-yard touchdown pass to Sherfield. Lance is believed to be the first quarterback since Tim Tebow (2010) to throw a touchdown on his first career pass.

Garoppolo completed his first eight passes and looked not only sharp but in full control of the offense, as expected in his fourth straight season-opening start.

Verrett limped off with an apparent right knee injury with 7:50 to go, after a busy day of being targeted by Goff. Verrett needed help not only walking to the sideline, but again minutes later as he headed into the locker room. Leg injuries stalled Verrett’s career until last season when he emerged in his 2015 Pro Bowl form.

Verrett gave up a 6-yard touchdown to T.J. …read more