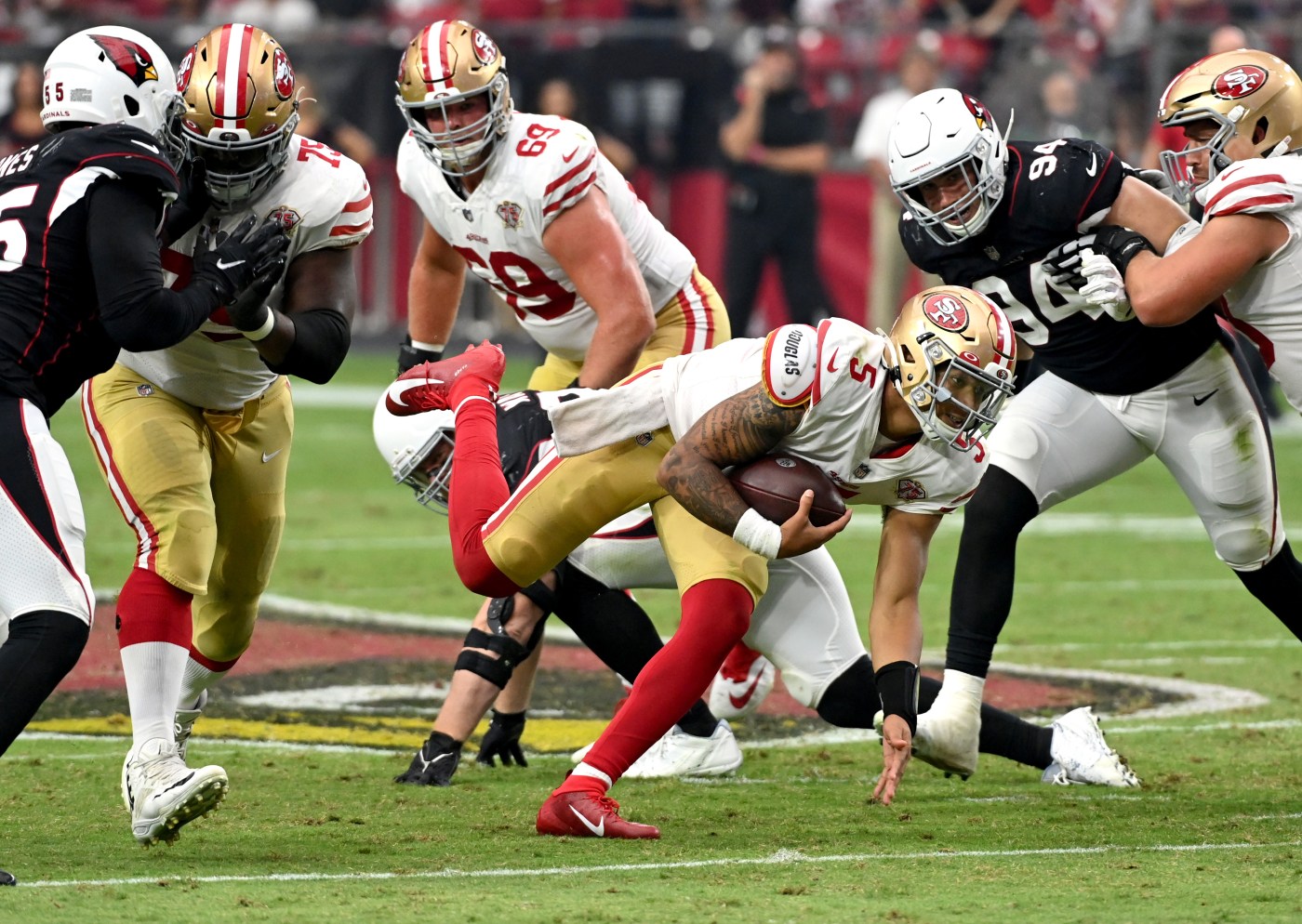 SANTA CLARA — Trey Lance did not emerge unscathed from his 49ers’ starting debut, a 16-carry workload that left him with a sprained left knee.

An MRI on Monday revealed that Lance did not sustain a long-term injury but one that could require one to two weeks of recovery.

The 49ers (2-3) have their bye this week before hosting the Indianapolis Colts on Oct. 24, all of which puts in question whether Lance or Jimmy Garoppolo will be healthy enough to start at quarterback.

Shanahan said the hope is for Garoppolo to return from a calf injury that sidelined him the past 1 1/2 games.

As for Lance, the rookie dual-threat artist was not sure which play resulted in his knee injury during Sunday’s 17-10 loss at Arizona, and it’s something he didn’t feel until he got in bed Sunday night, Shanahan said.

“It should be a one-to-two-week thing, but possibly just one,” Shanahan said on a media conference call, noting that Lance will be re-evaluated later this week and won’t know until next week if he has a chance to face the Colts.

Shanahan said he joked with both quarterbacks that they’ll have company rehabilitating their injuries at the team facility during the bye week. If neither is capable of playing against the Colts, the 49ers would summon Nate Sudfeld, who reverted to the practice squad Monday after suiting up as Lance’s backup Sunday.

Shanahan has maintained that Garoppolo is the 49ers’ starting quarterback, when healthy, though he noted Monday that “Trey definitely has the ability to win games, and he was a big part why we could have won yesterday.”

Neither are healthy, so that tables a quarterback controversy, right?

“It’s more of a decision than which player do you want to go with,” Shanahan said. “These three losses we’ve had in a row, the answer good or bad is not just quarterback. We have to play good all around.”

How long does a lifetime guarantee really last?

Lance passed for 192 yards (15-of-29, one interception, two sacks) but it was his 89 rushing yards on 16 carries that created the most buzz, if only because of it being the most runs by a 49ers’ quarterback since Colin Kaepernick’s 16 carries for 181 yards in a January 2013 playoff win over the Green Bay Packers.

“I was proud of him. He went into a tough environment, did a lot of real good things, also threw a big pick,
Shanahan said. “He was aggressive with what he saw. He ran aggressively.”

Lance’s biggest collision came just short of the goal line when he was stopped short by a pair of defenders, one of whom, Isaiah Simmons, left with a concussion.

On the play, Lance initially was supposed to throw to Elijah Mitchell out of the backfield, but the defense changed that plan, and even though it appeared Ross Dwelley and Kyle Juszczyk were open for a short toss across the middle, Shanahan agreed with a reporter’s contention that it was “Monday morning quarterbacking.”

— Linebacker Marcell Harris sustained a right-thumb fracture that will require surgery Tuesday, but he is not expected to …read more

Harriette Cole: My friend was shocked, but there’s no way I’d let her in my house