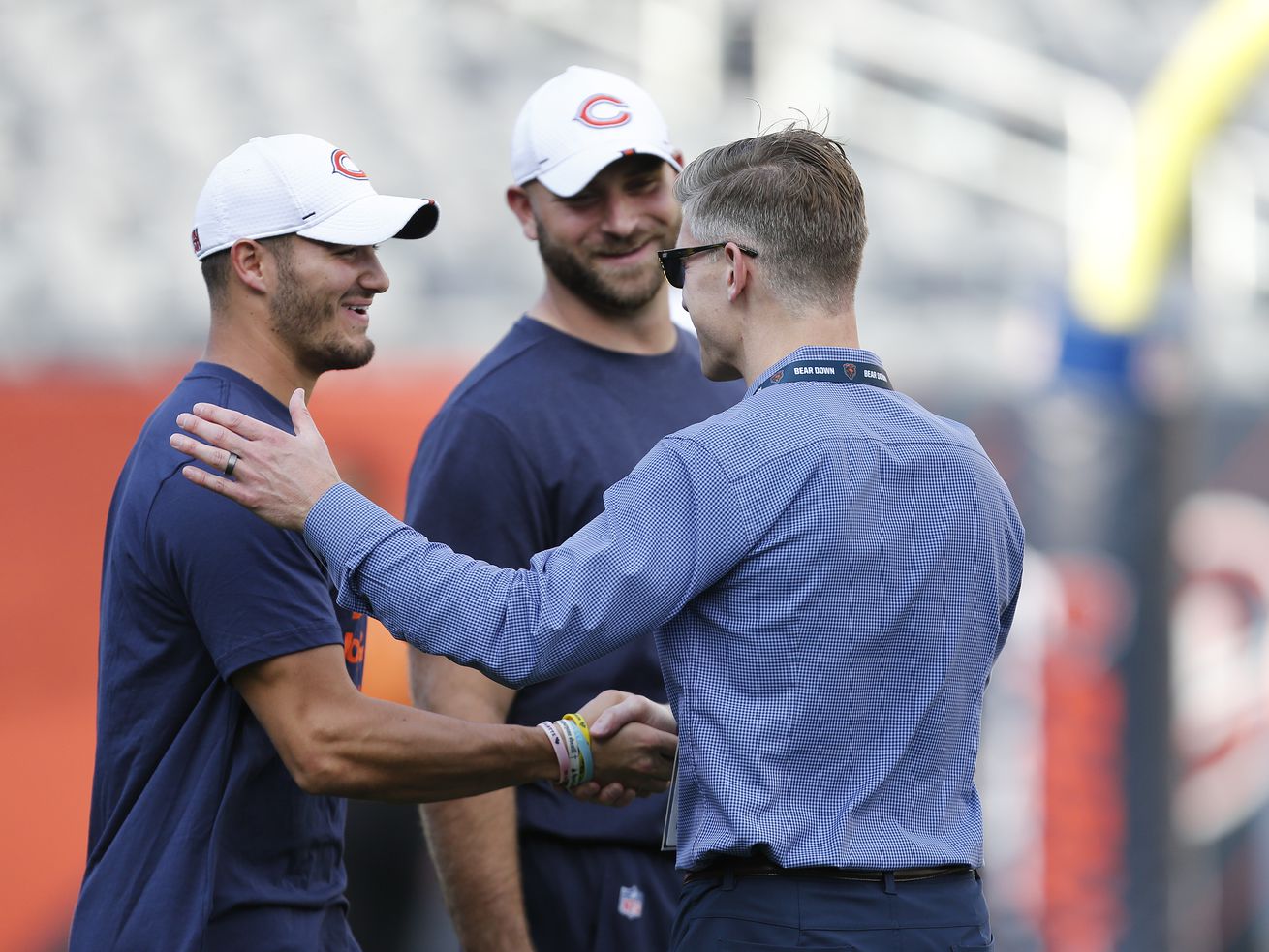 Bears general manager Ryan Pace (right, greeting Mitch. Trubisky and Kyle Long before a preseason game against the Titans in 2018) has taken one quarterback out of 39 picks over six NFL drafts. | Nuccio DiNuzzo, Getty

Pace said the Bears can go in any direction to finding a QB — “Everything is on the table.” And that working with Matt Nagy — instead of keeping John Fox out of the loop — will make a difference.

Discussing the Bears quarterback situation with general manager Ryan Pace played out like a Marx Brothers routine Wednesday — it was too late to talk about the past, too early to talk about the future and the present was off-limits for security reasons.

That didn’t leave much else, just the reality that the black hole at quarterback that has clouded a proud franchise for decades is about as deep and dark as ever heading into the 2021 offseason. Nick Foles is under contract. Mitch Trubisky is a free agent unlikely to return. And Tyler Bray is Tyler Bray.

And the big news of the day is that the GM who put them in this hole will be in charge of getting them out of it. Resolutely choosing Trubisky over Patrick Mahomes and Deshaun Watson with the No. 2 pick in the 2017 draft often is a fireable offense in and of itself. Whiffing on Mike Glennon in free agency and Foles via trade would only seem to further disqualify him from picking the next one.

Let’s put it this way: There are five ways for an NFL general manger to acquire a quarterback: inherit one; draft one; trade for one; sign a veteran free agent; or sign an undrafted free agent. In order, those quarterbacks for Pace are Jay Cutler, Trubisky, Foles, Glennon and Shane Carden. It is so Bears that getting rid of the quarterback who is the best of that bunch is actually one of Pace’s good moves.

New this week: 'MLK/FBI,' Why Don’t We and 'Prodigal Son'

Be that as it may, Pace at least acknowledged that despite Trubisky’s resurgence against four of the worst defenses in the league in December, the Bears have a quarterback problem.

“To get where we want to go, we definitely need more out of that position. We know that,” Pace said. “We’re just three days off a playoff loss, but that is what this offseason is all about.”

Pace said the Bears can go in any direction to finding a quarterback — “everything is on the table,” he said. And that working with Matt Nagy — instead of keeping John Fox out of the loop — will make a difference this time.

“Why do we feel strong about getting that position right? It goes back to that connective vision,” Pace said.

“I have a ton of confidence attacking it together. I can’t get into specifics for competitive reasons, but I can point to recent drafts when we focused on needs … and we were able to identify a guy like David Montgomery. The same holds true for [Cole] Kmet …read more

In videos ahead of shooting spree, gunman says, ‘I’m going to blow up the whole community’

San Francisco records most cases, deaths in one day since start of pandemic

Why Mark Ingram is a healthy scratch for the Ravens again, explained