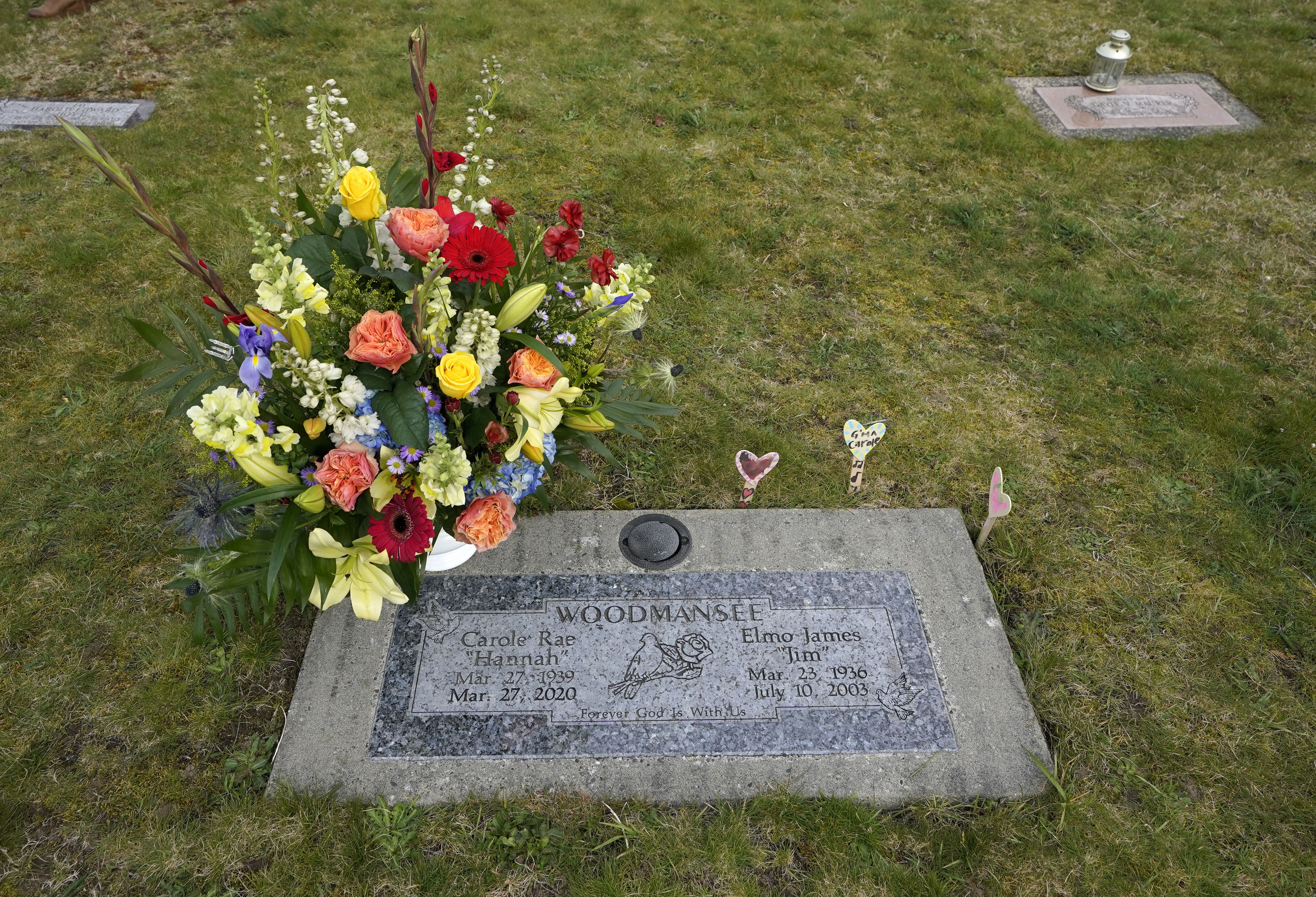 SEDRO-With dish soap, brushes and plastic water jugs in hand, Carole Rae Woodmansee’s four children cleaned the gravestone their mother shares with their father, Jim. Each scrub shined engraved letters spelling out their mother’s name and the days of her birth and death: March 27, 1939, and March 27, 2020.

Carole passed away on her 81st birthday.

That morning marked a year since she died of complications of COVID-19 after contracting it during a choir practice that sickened 53 people and killed two — a superspreader event that would become one of the most pivotal transmission episodes in understanding the virus.

For the siblings, the somber anniversary offered a chance at closure after the pandemic stunted their mourning. They were finally holding a memorial befitting of their mother’s footprint in the community.

“The hardest thing is that there was no goodbye. It was like she just disappeared,” said Carole’s youngest child, Wendy Jensen.

After cleaning, the siblings reminisce. They say their father must be happy to be back with his wife of 46 years. They thank them for being good parents and recall how their mother used to say “my” before calling their names and those of other loved ones.

“I was always ‘My Bonnie,’” Bonnie Dawson tells her siblings. “I miss being ‘My Bonnie.’”

“She had been missing Dad for a long time,” eldest sibling Linda Holeman adds. Their father, Jim, passed away in 2003.

Of the more than 550,000 people who have died of the virus in the United States, Carole was among the first. Her death came just weeks after the first reported outbreak at a nursing home in Kirkland, about an hour south of Mount Vernon. Carole, who survived heart surgery and cancer, had fallen ill at her home. Bonnie took care of her until they called the paramedics.

“You’re trying to say goodbye to your mom, and they’re telling you to get back. It was a very hard, emotional … to have to yell, ‘I love you, Mom,’ as she’s being wheeled out the door with men standing in our yard 10 feet out because they didn’t want to be near our house,” Bonnie said.

One dead in fire at San Jose restaurant

The rehearsal of the Skagit Valley Chorale, a community choir made up mostly of retirees and not associated with the church where they practiced, happened two weeks before Gov. Jay Inslee shut down the state. The choir had taken the precautions known at the time, such as distancing themselves and sanitizing. But someone had the virus.

“The choir themselves called us directly, and they left a voicemail. The voicemail said a positive person in the choir, 24 people now sick,” said Lea Hamner, communicable disease and epidemiology lead for Skagit County Public Health. “It was immediately evident that we had a big problem.”

Hamner and her team went to work interviewing choir members, often repeatedly, and those with whom they came in contact after the practice, a total of 122 people. They meticulously pieced together the evening, tracking things like where people sat and who …read more