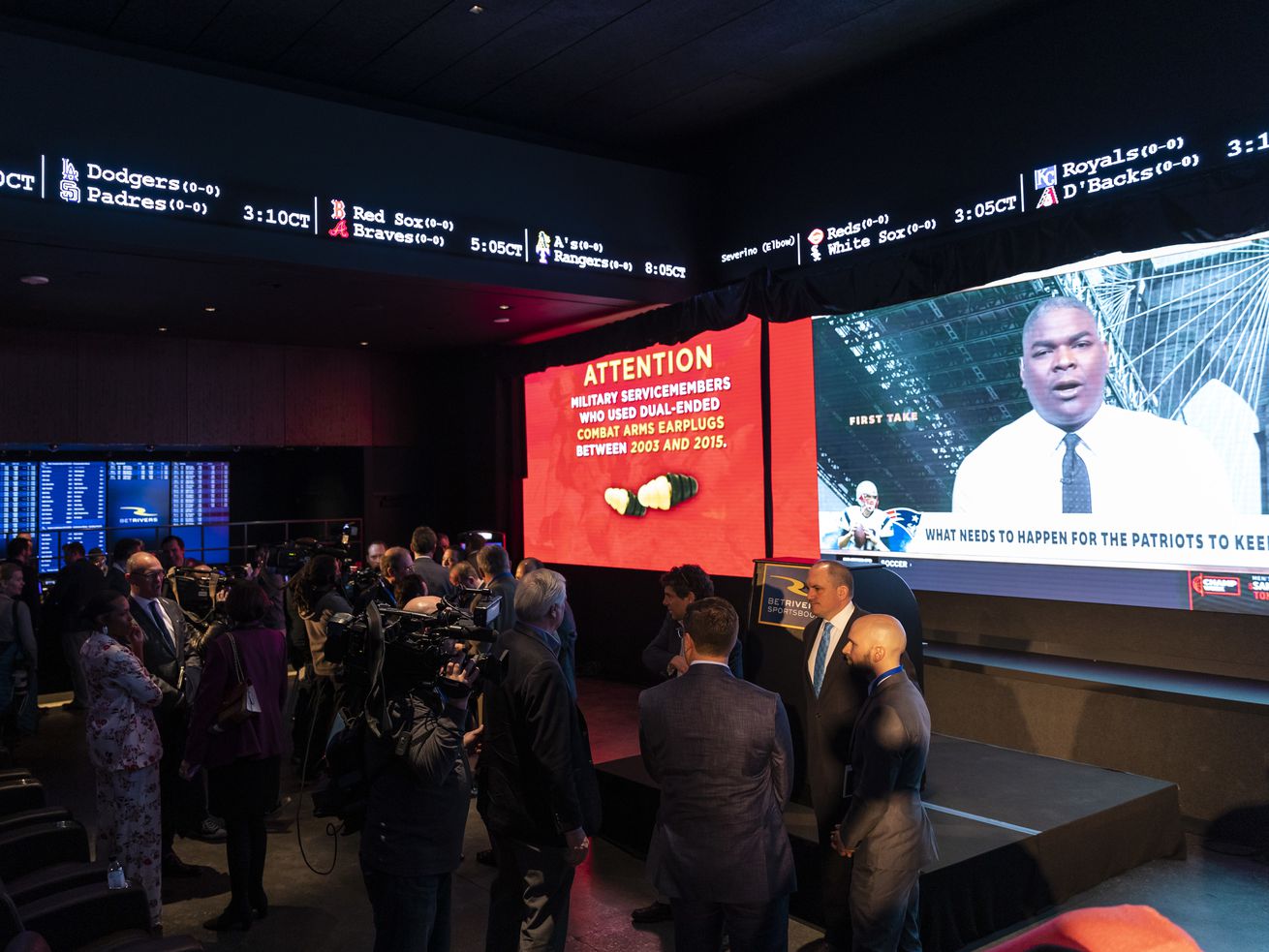 The BetRivers Sportsbook, the first brick-and-mortar sportsbook approved by the Illinois Gaming Board, opened in March 2020 in Des Plaines. Such operations are banned in Chicago, but the City Council could vote to change that, if an ordinance introduced by Ald. Walter Burnett on Wednesday is approved. | Ashlee Rezin Garcia/Sun-Times

The Cubs’ partnership with DraftKings could put Major League Baseball’s first stadium sportsbook at Wrigley Field. But first, the City Council must lift the ban on sports betting in Chicago. Ald. Walter Burnett, whose ward includes the United Center, wants to do just that.

The Cubs have forged a $100 million partnership with DraftKings that could pave the way for Wrigley Field to house the first stadium sportsbook in Major League Baseball. But, it can’t happen unless the City Council lifts the ban on sports betting in Chicago.

Now, an influential alderman wants to do just that.

At Wednesday’s City Council meeting, Ald. Walter Burnett (27th), whose burgeoning Near West Side ward includes the United Center, introduced an ordinance that would lift Chicago’s home-rule ban on sports betting and establish parameters for the city to issue those licenses and make money from it.

Under the plan, sports betting would be authorized either at Wrigley Field, Guaranteed Rate Field, Soldier Field, the United Center and Wintrust Arena or in a “permanent building or structure located within a five-block radius” of those stadiums.

Sports wagering would also be authorized inside inter-track wagering facilities and inside a Chicago casino, which has been authorized by the Illinois General Assembly but is years away from being built.

No more than 15 kiosks or wagering windows would be allowed at each location unless bettors can also purchase food and drink.

No one under age 21 would be allowed to place a bet. Sports wagering would be prohibited from midnight to 10 a.m., Monday through Thursday; midnight Friday to 9 a.m. Saturday; and 1 a.m. to 9 a.m. on Saturday and Sunday.

Study: Only half of American households donate to charity

Burnett openly acknowledged his ordinance is likely to trigger a heated debate over the pros and cons of sports betting and the danger that sanctioning sports wagering might somehow encourage Chicagoans who can least afford it to blow their paychecks.

But Burnett said the cold, hard reality is that sports betting has already been legalized by the state.

“Wrigley and the United Center — they’ve both been talking about setting up a spot for it. So this ordinance needs to be passed in order for that to happen. We’ll see where the Council wants to go with it,” said Burnett, chairman of the City Council’s Committee on Pedestrian and Traffic Safety.

“In my community, it’ll bring more people to the United Center. They may spend more money. It helps with the sales tax and also the amusement that these guys pay. …read more