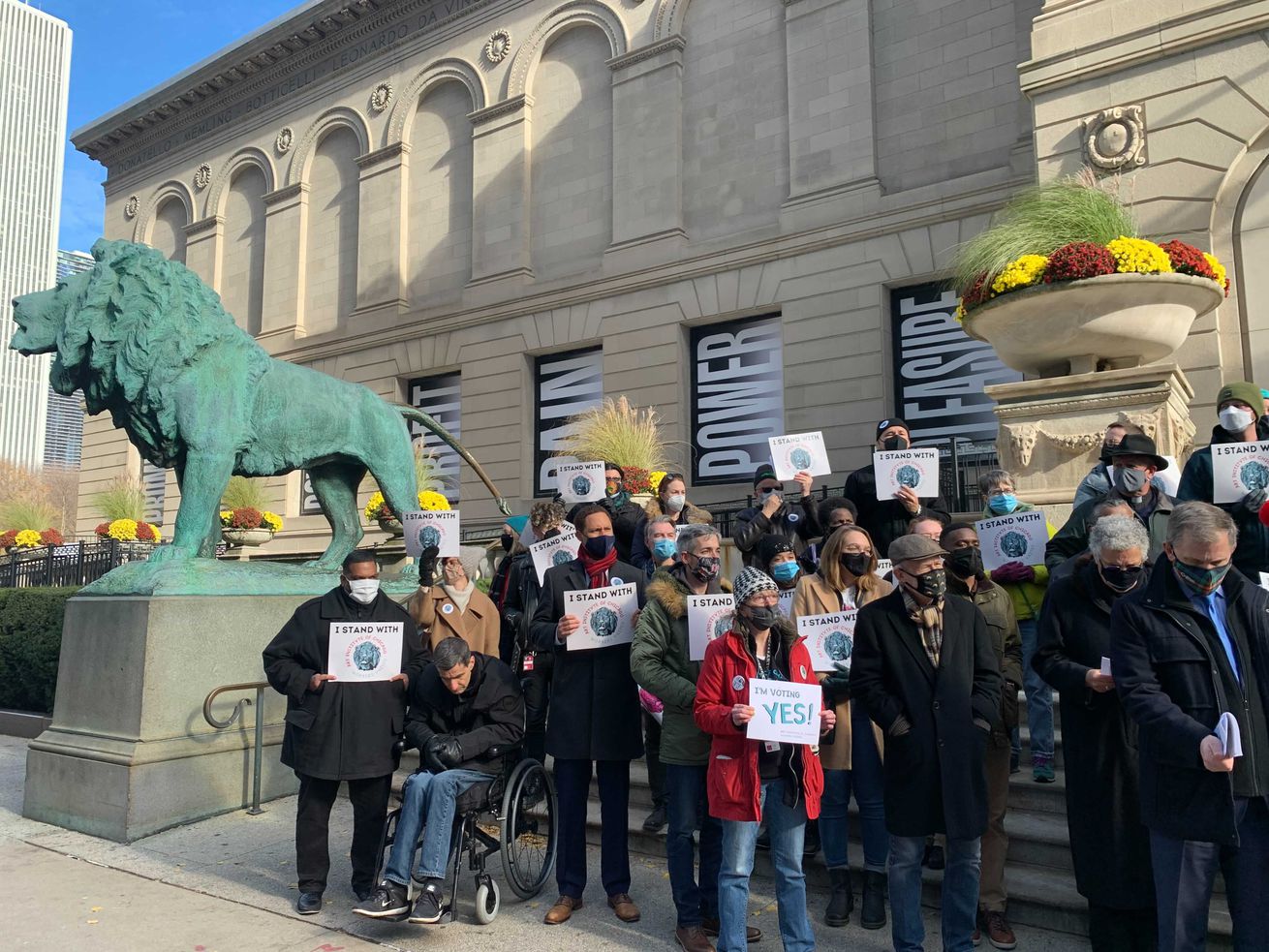 Workers and politicians attend a rally in November supporting the union organizing drive by employees at the Art Institute of Chicago. | Jason Beeferman/Sun-Times file

The workers have chosen to affiliate with the American Federation of State, County and Municipal Employees. Results of a separate union vote by workers at the museum’s school are to be announced Wednesday.

Capping an organizing campaign that turned bitter, employees of the Art Institute of Chicago have voted to unionize.

In an election tally made public Tuesday, the employees agreed to affiliate with the American Federation of State, County and Municipal Employees by a vote of 142 to 44, according to the National Labor Relations Board. The NLRB, which supervised the count of mailed-in ballots, said 20 votes were challenged.

The agency is conducting a separate election for employees of the museum’s school. Those ballots are expected to be counted Wednesday.

According to Anders Lindall, spokesman for AFCME Council 31, it marks the first time the renowned museum’s workers have affiliated with a union. The Art Institute was founded in 1879.

Lindall said the new union will cover more than 250 employees, including custodians, curators, library staff and gift shop workers. He said workers agreed to combine so-called “professional” and “non-professional” job titles into one bargaining unit to have a stronger union.

“Winning our union means a voice in our workplace and a chance to improve working conditions for ourselves, our colleagues, and those who will follow us for generations to come,” archivist Anna Feuer said.

Museum spokesperson Kati Murphy said, “As promised from the start, we fully respect our employees’ decision to join a union. The museum intends to enter into good faith bargaining with AFSCME to negotiate an initial collective bargaining agreement that best meets the needs of all parties involved while allowing us to continue to deliver on our mission.”

49ers head to Green Bay for another playoff matchup with Packers

Organizers made the union drive public in August, securing support from public officials. Workers participated in rallies that called on museum management to not try to persuade staffers to oppose the union.

Museum leadership opted to oppose unionization and made its case to workers. Most employers, when faced with a union drive, want the process to go to a secret-ballot election. It requires a union to demonstrate the depth of support while giving an employer time to make its case against organizing.

In November, workers held a news conference on the museum steps to accuse their bosses of threats, of wrongly telling some they were ineligible to vote and of giving poor performance reviews in possible retaliation for union activity. The museum denied those charges and asserted it supports workers’ rights to decide freely about unionizing.

Workers have cited better pay and a voice in decisions affecting them as key issues. The union had said “overwhelming majorities” of the workers signed cards attesting to their desire to unionize, offering that as a sign of broad-based support.

Betty White cause of death was stroke suffered 6 days earlier