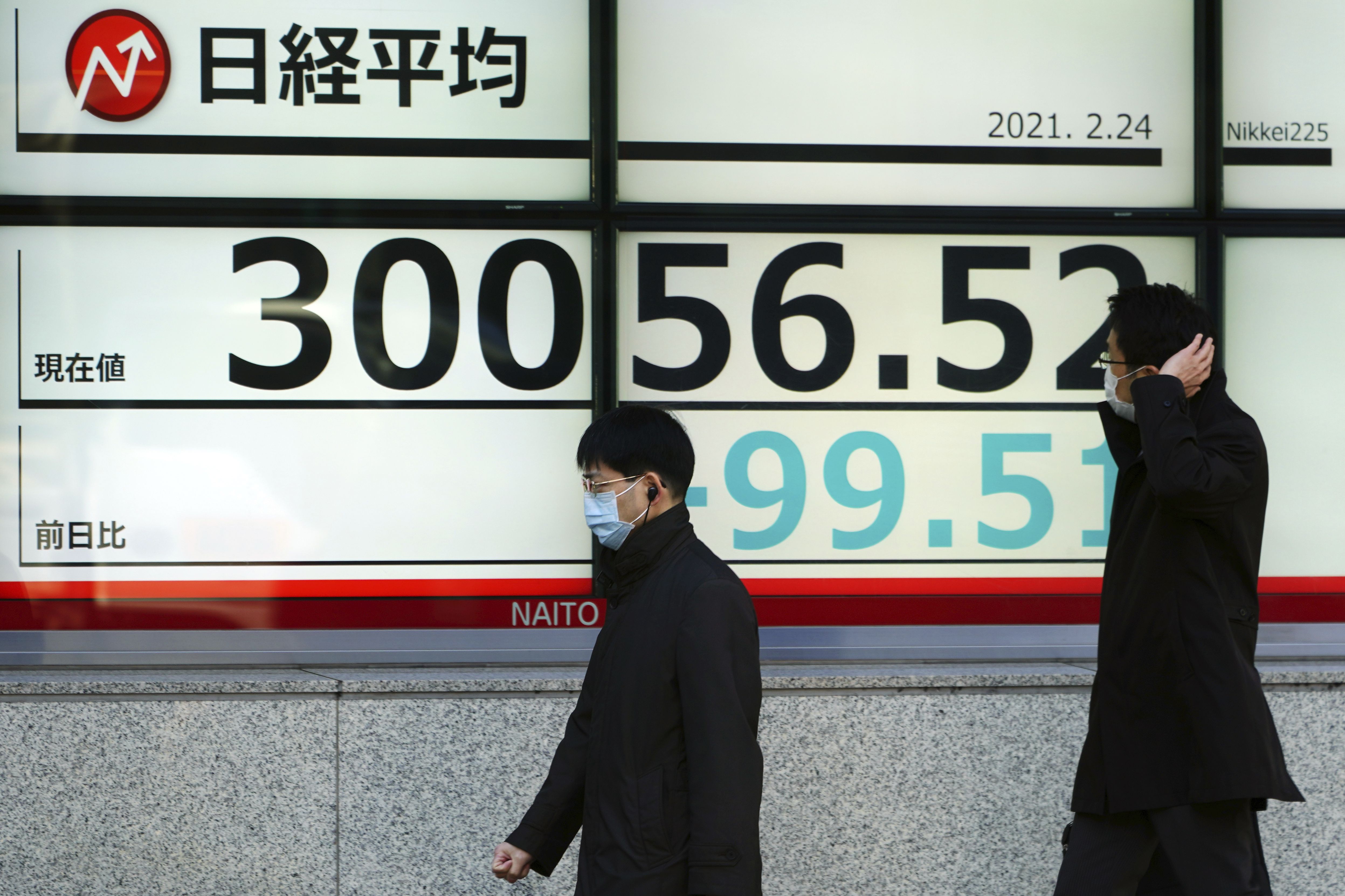 Shares fell Wednesday in Asia as investors weighed the possibility that inflation might prompt central banks to adjust their ultra-low interest rate policies, despite reassurances from the chair of the Federal Reserve.

Hong Kong’s government announced pandemic relief measures worth $15.4 billion to help the territory recovery from the blow to its economy, which contracted 6.1% last year. The measures include loans for the unemployed, consumption vouchers and tax relief. Hong Kong Finance Minister Paul Chan forecast the economy is set to grow 3.5% to 5.5% this year.

Investors remain increasingly focused on a big tick up in bond yields and how it affects stock valuations.

The large amount of stimulus being pumped into economies has been a factor in pushing bond yields higher, giving some investors pause as it revives worries about inflation that have been nearly nonexistent for more than a decade.

The yield on the 10-year Treasury note, which has climbed recently, was steady at 1.33% on Wednesday.

When bond yields rise, stock prices tend to be negatively impacted because investors turn an increasingly larger portion of their money toward the steadier stream of income that bonds provide.

The message seemed to be muted in Asia.

“Rising borrowing costs remain the prevalent issue on hand though Fed Powell’s dovish remarks had helped to arrest the fall for US equities on Tuesday,” Jingyi Pan of IG said in a commentary.

However, “Despite reassuring comments on lower rates from the U.S. Federal Reserve chair Jerome Powell, Asia markets continued to look to concerns with regards to the rising bond yields,” Pan said.

A late-afternoon burst of buying on Wall Street on Tuesday helped reverse most of a tech-focused sell-off, nudging the S&P; 500 to its first gain after a five-day losing streak.

Since the pandemic began, investors have pushed prices of Big Tech stocks to stratospheric heights, betting that quarantined consumers would do most of their shopping online and spend more on devices and services for entertainment.

The bet mostly paid off. But the pandemic may be reaching its end stages, …read more

Golden Globes 2021: The Complete List of Nominees | Entertainment Weekly
How How Disneyland’s most devoted fans have coped during the park’s nearly yearlong closure