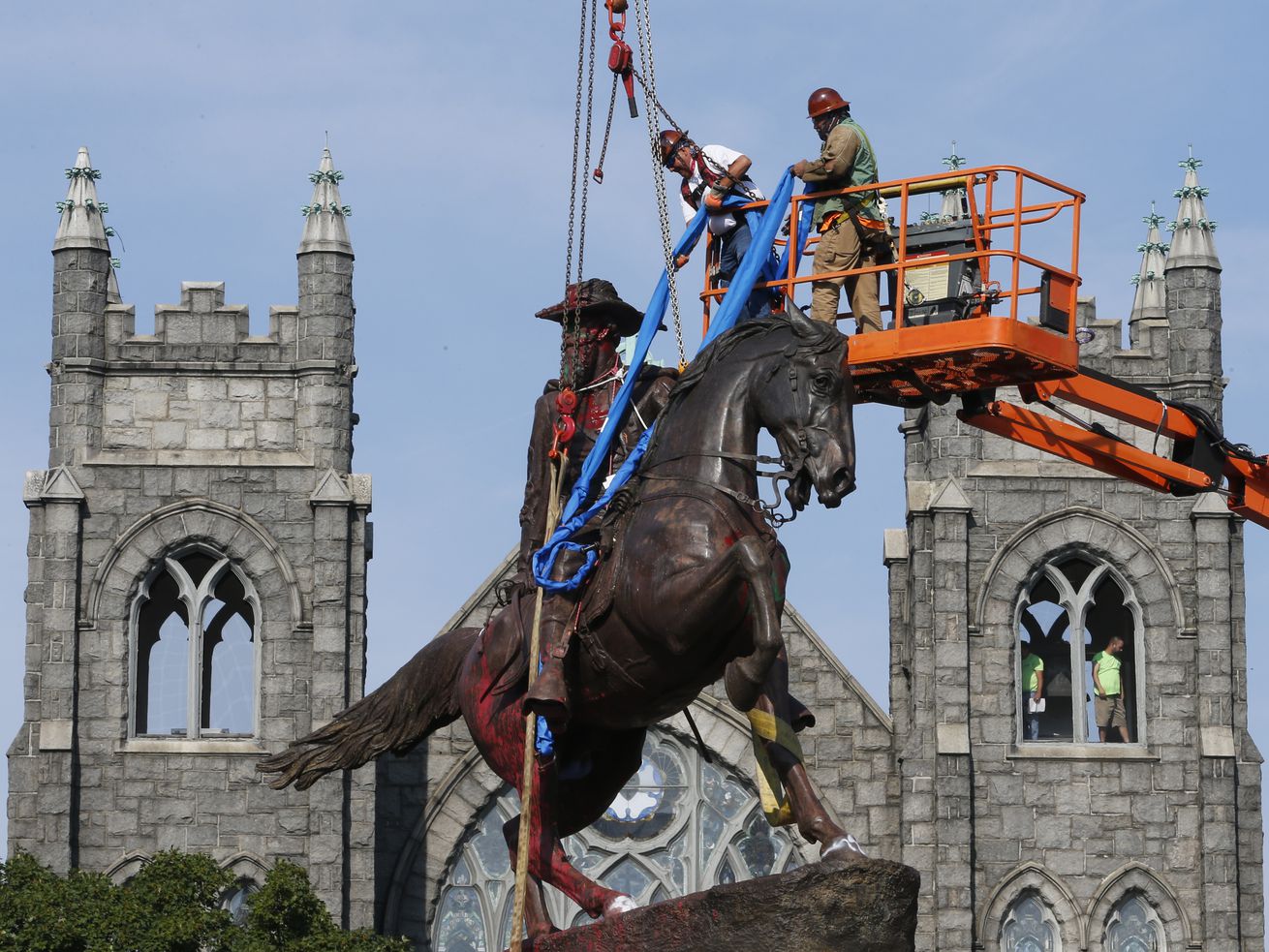 In this July 7, 2020, file photo, crews attach straps to the statue Confederate General J.E.B. Stuart on Monument Avenue in Richmond, Va. At least 160 Confederate symbols were taken down or moved from public spaces in 2020. That’s according to a new count the Southern Poverty Law Center shared with The Associated Press. | AP

The Montgomery, Alabama-based law center, which keeps a raw count of nearly 2,100 statues, symbols, placards, buildings and public parks dedicated to the Confederacy, plans to release the latest figures from its “Whose Heritage?” database on Tuesday.

NEW YORK — When rioters tore through the U.S. Capitol last month, some of them gripping Confederate battle flags, they didn’t encounter a statue of the most famous rebel general, Robert E. Lee.

The Lee statue, which represented the state of Virginia as part of the National Statuary Hall Collection in the Capitol for 111 years, had been removed just weeks before — one of at least 160 public Confederate symbols taken down or moved from public spaces in 2020, according to a new count the Southern Poverty Law Center shared with The Associated Press ahead of releasing it.

The Montgomery, Alabama-based law center, which keeps a raw count of nearly 2,100 statues, symbols, placards, buildings and public parks dedicated to the Confederacy, plans to release the latest figures from its “Whose Heritage?” database on Tuesday. It has been tracking a movement to take down the monuments since 2015, when a white supremacist entered a South Carolina church and killed several Black parishioners.

“These racist symbols only serve to uphold revisionist history and the belief that white supremacy remains morally acceptable,” SPLC chief of staff Lecia Brooks said in a statement. “This is why we believe that all symbols of white supremacy should be removed from public spaces.”

Sometime after visitors and tourists are welcomed back to the U.S. Capitol, there will be a statue saluting Virginia’s Barbara Johns, a 16-year-old Black girl who staged a strike in 1951 over unequal conditions at her segregated high school in Farmville. Her actions led to court-ordered integration of public schools across the U.S, via the landmark Supreme Court decision, Brown v. Board of Education.

Each state legislature can choose up to two representatives to honor in the Capitol’s collection. In December, a state commission recommended replacing Lee’s statue with a statue of Johns. Supporters told the AP that Virginia’s legislature has nearly finalized her elevation alongside George Washington.

Joan Johns Cobbs, Barbara Johns’ younger sister, is ecstatic about the coming honor. She’s also happy it hadn’t happened before Jan. 6, when the Capitol was breached.

“You can’t imagine how sad I was seeing what was happening in the Capitol building,” Cobbs said. “I was saying to myself, ‘Oh, my God. I’m kind of glad her statue wasn’t there already.’ I wondered what would have happened.”

Long seen as offensive to Black Americans, Lee’s Capitol statue wasn’t the only one representing a figure from the Lost Cause, a term referring to a belief that fighting on the …read more

The future is now for gig-based entrepreneurship