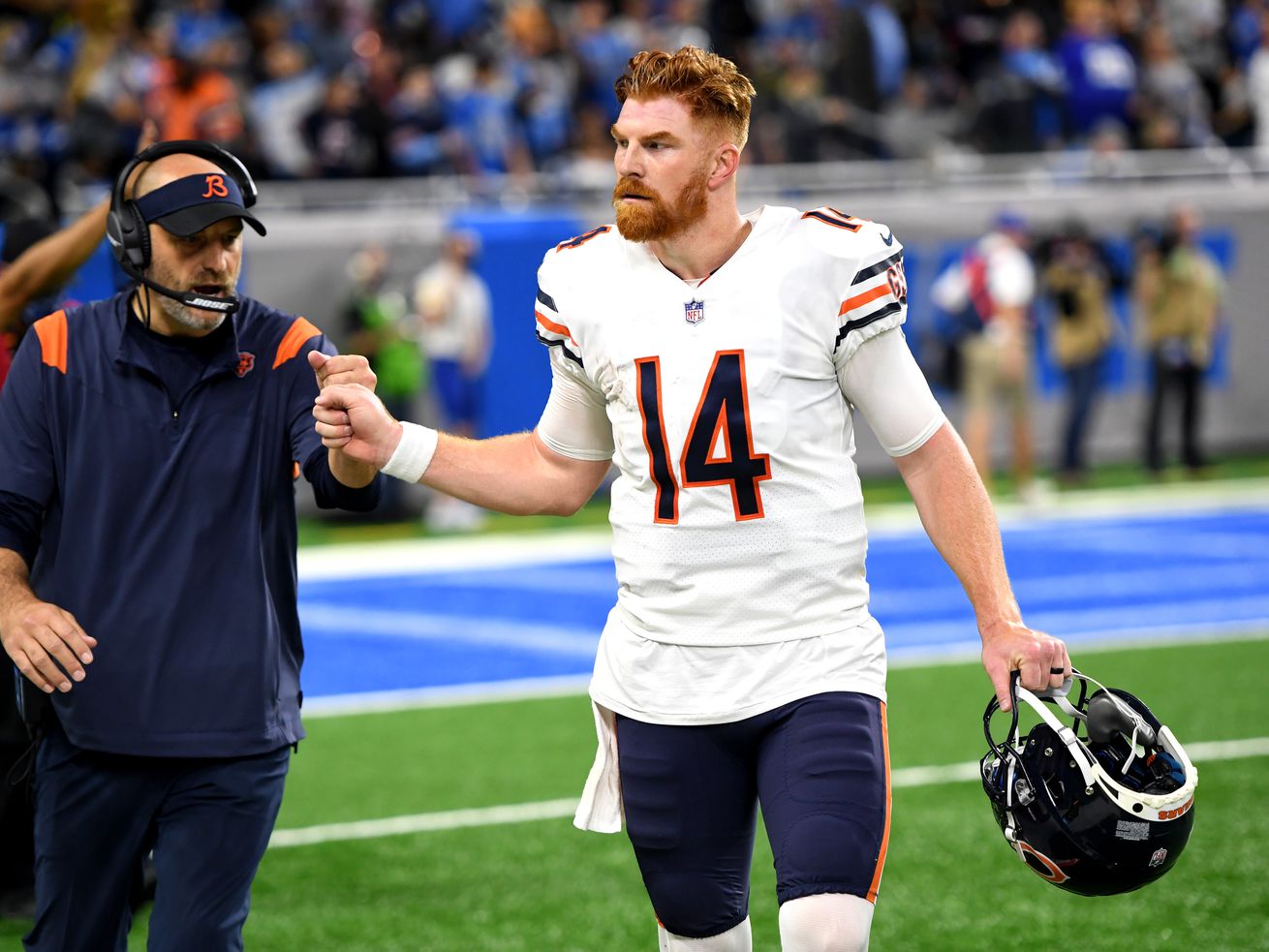 Coach Matt Nagy and quarterback Andy Dalton fist bump during the Bears’ 16-14 victory over the Lions on Thursday. | Photo by Nic Antaya/Getty Images

But the New Year shouldn’t be as kind to you and GM Ryan Pace.

If anyone tells me that the Bears still have a chance of going 10-7 this season, I will hunt them down and make them read Pat McCaskey’s 2009 book “Bear With Me: A Family History of George Halas and the Chicago Bears’’ as punishment. Consider yourself warned.

I’m not scared of the possibility that the Bears, who beat the Lions 16-14 Thursday to end a five-game losing streak, will win their final six games. I’m concerned that the McCaskeys, looking for an escape route to avoid firing anybody, will hear even one positive voice and think it’s a chorus of support for the status quo.

We somehow made it past this week’s bizarro report that ownership was going to fire coach Matt Nagy after the Detroit game. That didn’t come to pass for two reasons: 1) a firing makes no sense at this point of the season and 2) the McCaskey family drives the 45 mph minimum when the speed limit on the Highway of Change is 70. But it’s the holidays, when NFL’s silly season of rumors kicks in, so there we were, chasing ghosts.

The bogus report of Nagy’s imminent firing was concerning for one big reason: It gave life to the very dark thought that the Bears might get rid of Nagy but keep general manager Ryan Pace. Pace, you might remember, hired Nagy in 2018 to turn Mitch Trubisky into a great quarterback and the Bears’ offense into an unstoppable force. We all know how that turned out. Pace is also the guy who drafted Trubisky with the second overall pick of the 2017 draft, a transgression worthy of a prison term in several countries.

Nagy wasn’t canned Thursday, which could mean that, fingers crossed, Pace is just as likely to be fired after the season as Nagy is.

That’s what passes for hope these days with the Bears.

It’s hard to ponder this franchise for any amount of time without feeling trapped. You celebrate the idea that Nagy will be gone soon but worry that Pace could still be part of your ongoing nightmare. You smile at the thought of both men looking for new jobs but remember that team chairman George McCaskey will be the one to OK their replacements. You embrace the saying that even a stopped clock is right twice a day and then you remember that ownership tells time with a sundial.

I can give you 50 reasons why Pace should be fired at the same time as Nagy. I can give you one reason why the McCaskeys would keep Pace: They don’t want to have to hire someone to hire Pace’s successor.

It really does hurt your head to get drawn into this world.

Thursday’s game didn’t matter in any appreciable way, except to the …read more

Dear Abby: The bride says my boyfriend is invited but I’m not