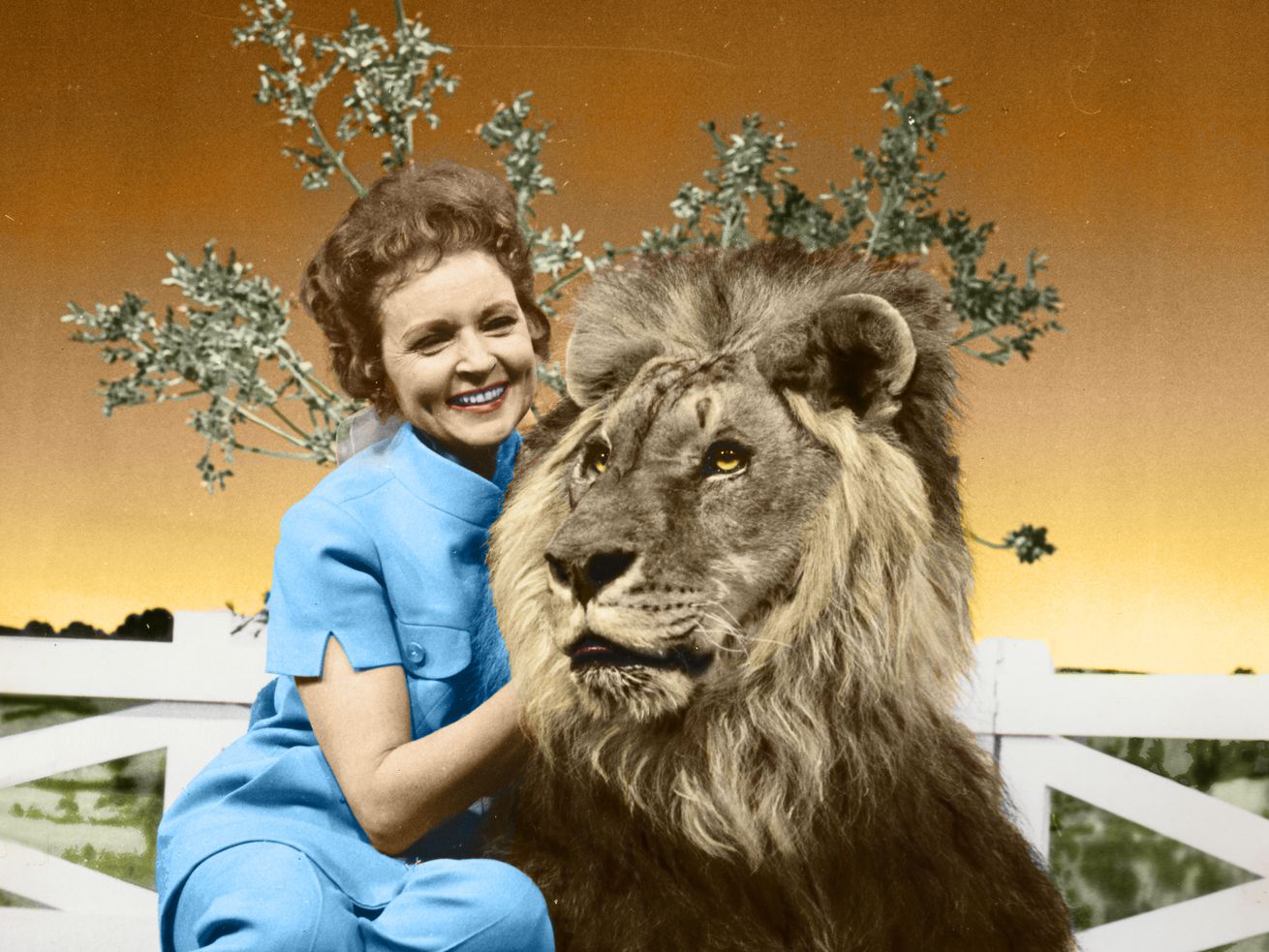 This colorized image shows actress Betty White with a lion from her 1970s series “The Pet Set.” | AP

White and her husband, the late game show host Allen Ludden, produced the 39-episode series (originally titled “The Pet Set”) that aired in syndication in 1971 and was released Tuesday on DVD and streaming and digital platforms.

But White appears most delighted in the company of the real stars of “Betty White’s Pet Set,” among them elephants, lions and snakes. And dogs, lots of dogs.

“All I can say is, Charlie Brown is right: Happiness is a warm puppy,” a beaming White says in one episode, cuddling a pair of tiny brown pooches as she quotes the Peanuts comic strip character.

She and her husband, the late game show host Allen Ludden, produced the 39-episode series (originally titled “The Pet Set”) that aired in syndication in 1971 and was released Tuesday on DVD and streaming and digital platforms after a laborious restoration process.

Making the show was strictly a labor of love for the Emmy-winning star of “The Golden Girls” and “The Mary Tyler Moore Show” who, at the age of 99, has retained her affection and compassion for animals.

“When Allen and I started our own production company so many years ago, the one show I wanted to do was ‘The Pet Set,’” White told The Associated Press. “Allen’s offices were the most exciting in the building because we were the only show pre-screening guests who were furry and four-legged.”

“What a time! It remains one of my favorite shows even 50 years later,” White said in a statement.

White, a longtime advocate for animal well-being and conservation, reveled in doing a show with her husband and friends that focused on her passion for animals, said TV producer and distributor Darren Wadyko, whose company shepherded the re-release.

Here’s what you can expect to get from the $1.9 trillion House coronavirus stimulus package

Her celebrity pals were invited to bring their pets and get the chance to meet wild animals — sometimes to the guest’s dismay. Reese (“Touched By An Angel”) looked askance at White when she tried to coax her closer to a leopard, and Jim Nabors (“Gomer Pyle”) did likewise when a snake was involved.

Burnett initially hesitated when called on for the messy task of bottle-feeding a baby elephant, but then the formula and the quips flow. “These Playtex Nursers, you can’t beat ‘em,” she says.

White, however, was fearless, especially in encounters filmed at a Southern California training compound that provided animals for TV and movies. At one point, she’s seen snuggling with a 500-pound lion.

Disneyland donations by the numbers during the pandemic