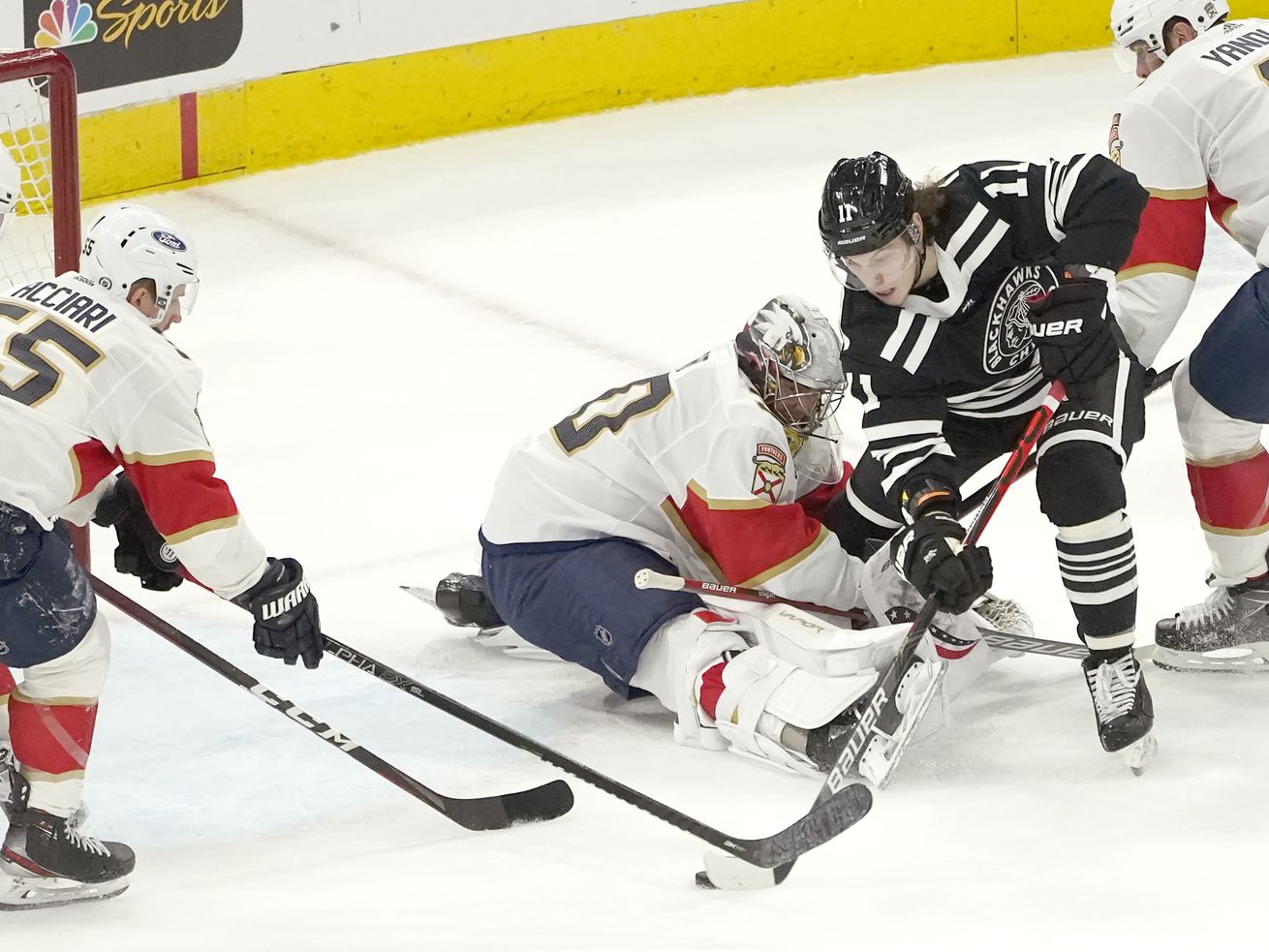 Adam Gaudette has scored four points in his first four games with the Blackhawks. | AP Photos

The 6-1, 170-pound forward finally should be able to bulk up this summer now that his digestive disorder, which had affected his appetite for years, has been treated.

But Gaudette finally expects to be able to bulk up his 6-1, 170-pound body this offseason.

Why? After years of struggling with a lack of appetite, involuntary vomiting and nausea and searching fruitlessly for a cause, Gaudette finally was diagnosed last fall with candidiasis, a condition in which Candida — a type of yeast that naturally lives in the human body — grows out of control in the digestive system.

‘‘I would get sick in the mornings,’’ Gaudette said last week. ‘‘I would throw up all the time. I couldn’t eat; I wasn’t hungry. After a game, I’d have a protein shake and wouldn’t be able to eat for hours after. I just wasn’t getting the nutrients and the food in me.’’

Gaudette, 24, had two blood tests done last year in Vancouver, where he spent the first four seasons of his NHL career with the Canucks. He sent the results to his nutritionist from his high school days in Massachusetts, and she noticed his Candida levels were ‘‘way over the limits.’’

That discovery jump-started the process. Working with doctors and nutritionists in Massachusetts and Vancouver, Gaudette twice went on medicine to clear up the initial overgrowth and changed his diet to prevent it from happening again.

Studies show Candida thrives on sugar and starch, so Gaudette cut out most processed foods, sodas, energy drinks and other high-sugar items and switched to a vegetable-heavy diet. He also takes probiotics and vitamins daily.

‘‘I still add in red meat every now and then, but it’s mostly chicken, fish, nuts, seeds, beans and all the vegetables,’’ he said.

Corals use sound to "talk" to each other, new research says

Gaudette was starting to make significant progress healthwise when he was stricken with a severe case of COVID-19 this spring. Last week, he pushed back vehemently against rumors that he started the Canucks’ massive outbreak, saying: ‘‘A lot of disrespectful things that were said about me and my wife were just not true.’’

Traded to the Hawks as soon as he recovered, Gaudette had four points in his first three games entering Monday, inspiring memories of his 2018 Hobey Baker-winning season at Northeastern.

Gaudette was the most dominant player in college hockey that year, racking up 60 points in 38 games. He returned to that level of offensive confidence with the Canucks last season, with 33 points in 59 games, but never clicked this season (seven points in 33 games) in a fourth-line role.

‘‘He’s been very committed to the work ethic and just getting himself prepared, knowing [there are] no guarantees as far as his playing time,’’ Colliton said. ‘‘He has done a good job with the opportunity he’s received.’’

Bulls failure this season could lead to an interesting offseason