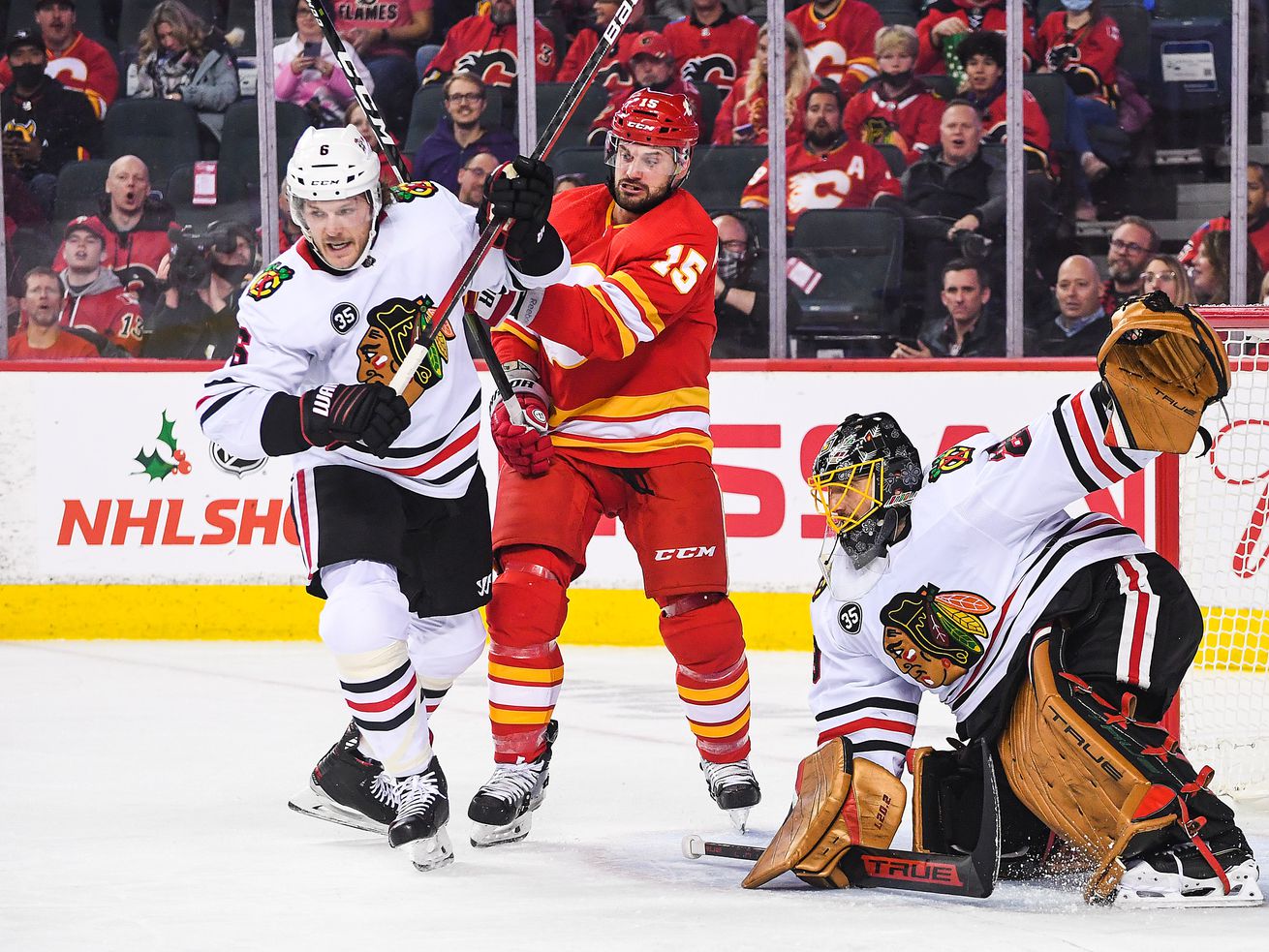 Jake McCabe and the Blackhawks’ defensemen have focused lately on defending the slot. | Derek Leung/Getty Images

Interim coach Derek King has the Hawks locking down the slot first, then sorting out their defensive coverage from there.

For years, the Blackhawks have been trying to find ways to improve their defense.

So far, nothing has really worked, at least to the point of being both sustainable and tangibly impactful.

In the seven games since the exit of ex-coach Jeremy Colliton — whose half-man, half-zone hybrid defensive system had become the scapegoat for any and all goals the Hawks conceded — they’ve still had their struggles in the defensive end. This likely won’t be an overnight fix, or even an over-a-month fix.

But there have been some slight adjustments made. And encouragingly, those adjustments have led to some slight improvements, providing some traction the Hawks might be able to build on as the season progresses.

Associate coach Marc Crawford, whom interim coach Derek King has largely entrusted with the defensemen, has been hammering on two points in particular.

“We’ve just tried to encourage them to make direct plays, keep their feet moving,” Crawford said. “It’s amazing: If you…[compare] the percentage of passes that get completed, it is a lot about footwork. So we’ve been talking a lot about that message.

“And the footwork comes into play on closing on people, too. You take away their space and they have less time to make plays. So we’ve been talking a lot about foot movement, both with and without the puck.”

And when the Hawks are hemmed into their own zone, they’re focusing more on defending the slot in particular.

A frequent criticism of the Hawks’ strategy under Colliton was they’d often end up chasing opposing puck-carriers along the walls, behind the net and everywhere else in the zone, which often spread out their coverage too sparsely. King’s approach has them defending from the inside out.

“They have to stop in ‘the house,’ as we call it, then they have to sort [the coverage] from there,” King said. “Instead of back-checking into a corner and then sorting out. Everything happens in that slot. Good teams will pick you apart if you don’t have guys there.”

The Hawks’ improvement in slot protection can be somewhat seen in the data.

Although they’ve actually allowed more even-strength shot attempts per 60 minutes under King than under Colliton (61.0 versus 59.5), heat maps of those attempts show they’ve been less concentrated in any one area in recent games, whereas the greatest density occurred right in front of the net in earlier-season games. Plus, the percentage of those attempts that have also been credited as scoring chances has declined from 52.5% to 47.2%.

“We’re doing a good job of containing them to the outside when we do have those long shifts in-zone,” defenseman Jake McCabe said.

Ideally, the Hawks like to have their defensemen anchored in or around the slot while their low center pursues the puck into the corner and their wings provide support.

Andy Dalton will start against Lions

Miss Manners: What I said caused the party to end early

Traffic management, in a roundabout way