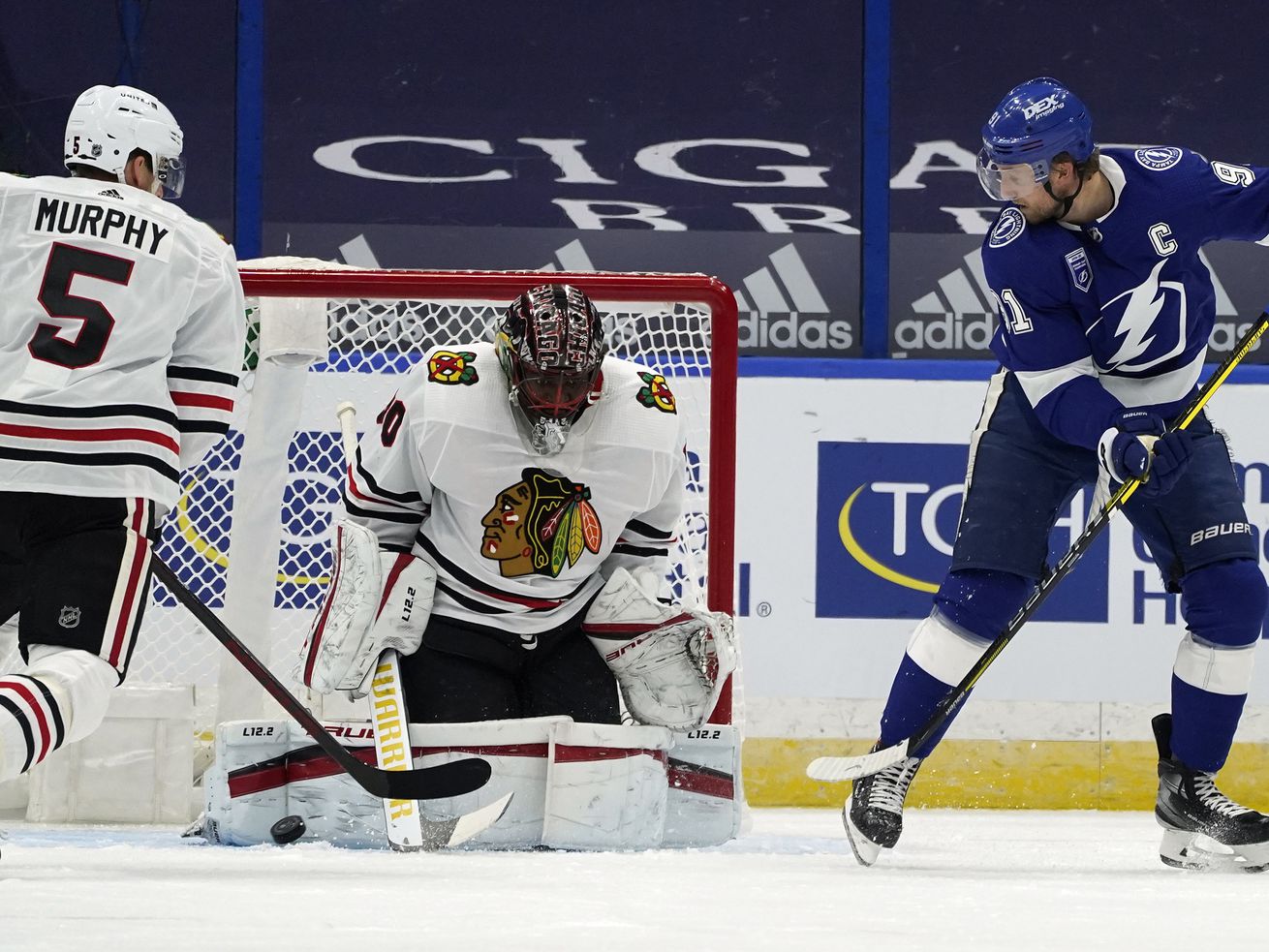 Malcolm Subban, like the rest of the Blackhawks, struggled in the season opener Wednesday at Tampa Bay. | AP Photos

Malcolm Subban received the first crack at the Hawks’ starting goalie role, and against a nearly impossible matchup, he didn’t exactly run with it.

After nine days of neck-and-neck competition, the Blackhawks gave Malcolm Subban the first crack at the starting goaltender role Wednesday.

In a decisive, predictable 5-1 loss to the defending champion Lightning in the season opener, Subban surrendered five goals on 33 shots.

For every great save — like his remarkable desperation robbery against Alex Killorn in the third period — the relative “veteran” of the goalie corps misplayed another situation and gave up an easy goal. His rebound control, supposedly an emphasis for both he and Collin Delia’s offseason training, and puck awareness were noticeably subpar.

Of course, none of his teammates performed much better. Much like the second playoff series of the summer against the Golden Knights, the Hawks received an up-close look at what a Cup contender now looks like and how far removed they are from that level.

Outside of the resilient, sturdy fourth line of David Kampf centering Matthew Highmore and Ryan Carpenter — which forechecked hard and produced chances even as the score escalated — the Hawks’ forwards produced few looks against the Bolts’ stacked defense, and the Hawks’ own reassembled defense gave up plenty to the Bolts’ top-heavy offense.

None of that was particularly surprising, though. The Hawks could lose all eight divisional matchups against Tampa Bay this season and it wouldn’t be surprising.

Of greater importance is identifying the goaltender of the future and giving him as many tests — and as much experience — as possible during this throwaway year.

Coach Jeremy Colliton acknowledged before the game this “competition will continue” for weeks or months, and it’d be shocking if he didn’t pivot to Delia to take the next turn Friday.

For salary cap purposes, the Hawks’ active roster Wednesday included the bare minimum 12 forwards, six defensemen and two goalies, but the Hawks will likely move a couple of those taxi squad guys onto the active roster in the coming days.

Given that all six of them qualify as prospects, the Hawks will look to integrate them all into the lineup at various points.

But the composition of the taxi squad may change markedly when the AHL season begins Feb. 5, when the Hawks may shift their prospects to Rockford to maximize their playing time.

“I ended up waking up at 5 [a.m.] and haven’t been able to sleep since then,” Mitchell said after morning skate, grinning broadly. “My mind was definitely racing…but honestly [I’m] just more excited than nervous. I’ve prepared for this …read more

5 things on your real estate checklist in January

The degradation of women by the police