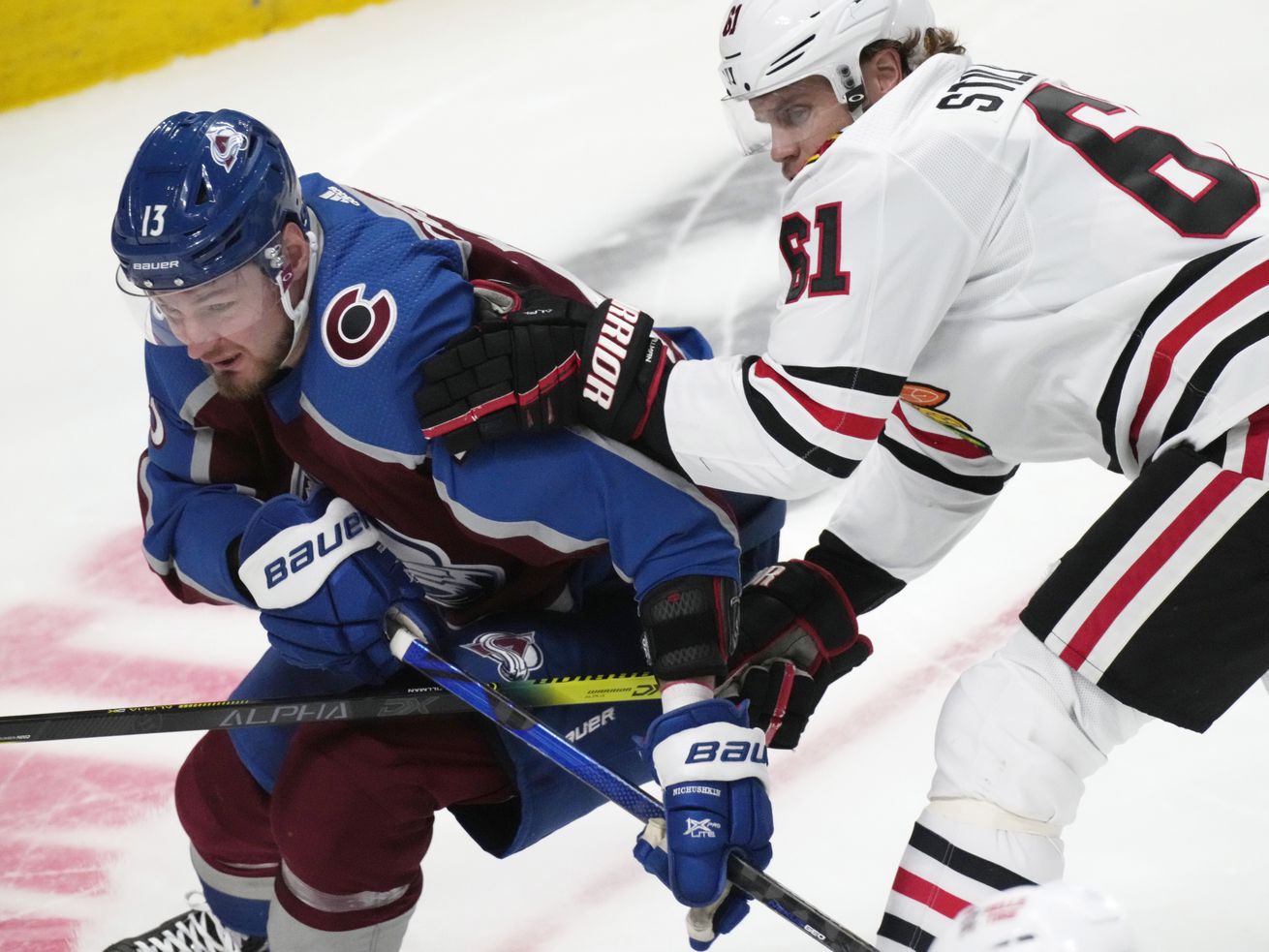 The Avalanche beat the Blackhawks 4-2 in the season opener Wednesday. | AP Photo/David Zalubowski

Three goals against in the first 10 minutes doomed the Hawks to a 4-2 defeat.

For the third consecutive year, the Blackhawks never found their legs in their season opener.

The Avalanche jumped on the Hawks early and never looked back, dealing the Hawks a 4-2 loss that looked worse than the final score reflected.

Journeyman defenseman Jack Johnson beat Marc-Andre Fleury on a breakaway to figuratively unleash the avalanche in the first period; a few minutes later, the Avs held a 3-0 lead on the scoreboard and 16-2 advantage in shots on goal.

“When they scored the first one, the game got out of control for most of that first period,” Hawks coach Jeremy Colliton said. “It boils down to we didn’t do a very good job with their rush offense. We didn’t have enough guys back, and the guys we did have back, I didn’t think we sorted out the rush well enough. They were able to get way, way too high a quality of chances in those situations, which they scored on.”

“[Slow starts] happened a couple times in the preseason, too,” forward Dominik Kubalik added. “I wouldn’t say we weren’t ready. But we didn’t manage the puck how we wanted.”

The Hawks frequently left opponents ignored and open on the weak side of the play, and the Avs’ aggressive defensemen created outnumbered situations by jumping into the play frequently.

Kubalik scored a power-play goal and Connor Murphy brought the Hawks within two in the third period, but the late push wasn’t enough.

Seth Jones struggled mightily in his debut, as the Avs dominated the Hawks in scoring chances 23-4 and goals 2-0 during his even-strength ice time. He finished the game on a pairing with Riley Stillman instead of Calvin de Haan as Colliton shuffled nearly every line and combo, but the changes aren’t expected to stick.

Kirby Dach, conversely, was perhaps the Hawks’ best player, producing several golden chances for himself in the second period. But his finishing struggles in his NHL career to date continued to weigh on him.

“It sucks,” Dach said. “If I score those, it might be a different game. That’s on me. It’s been a problem of mine for the past couple of years…so I’ve got to figure something out.”

The Hawks have now lost three straight season openers, falling 4-3 to the Flyers (in Prague) in 2019 and 5-1 to the Lightning last season.

But the team’s season-opening road trip nonetheless continues Friday with an easier matchup against the Devils.

“We need to be better, [and] we will be better,” Colliton said. “We’ve got good players and the stuff that happened is very correctable.”

Biden to announce that ports of LA, Long Beach will begin 24-hour operation

Palmdale man is killed, 3 others are wounded in Lancaster restaurant shooting

Sky guard Allie Quigley’s WNBA journey is one of resilience