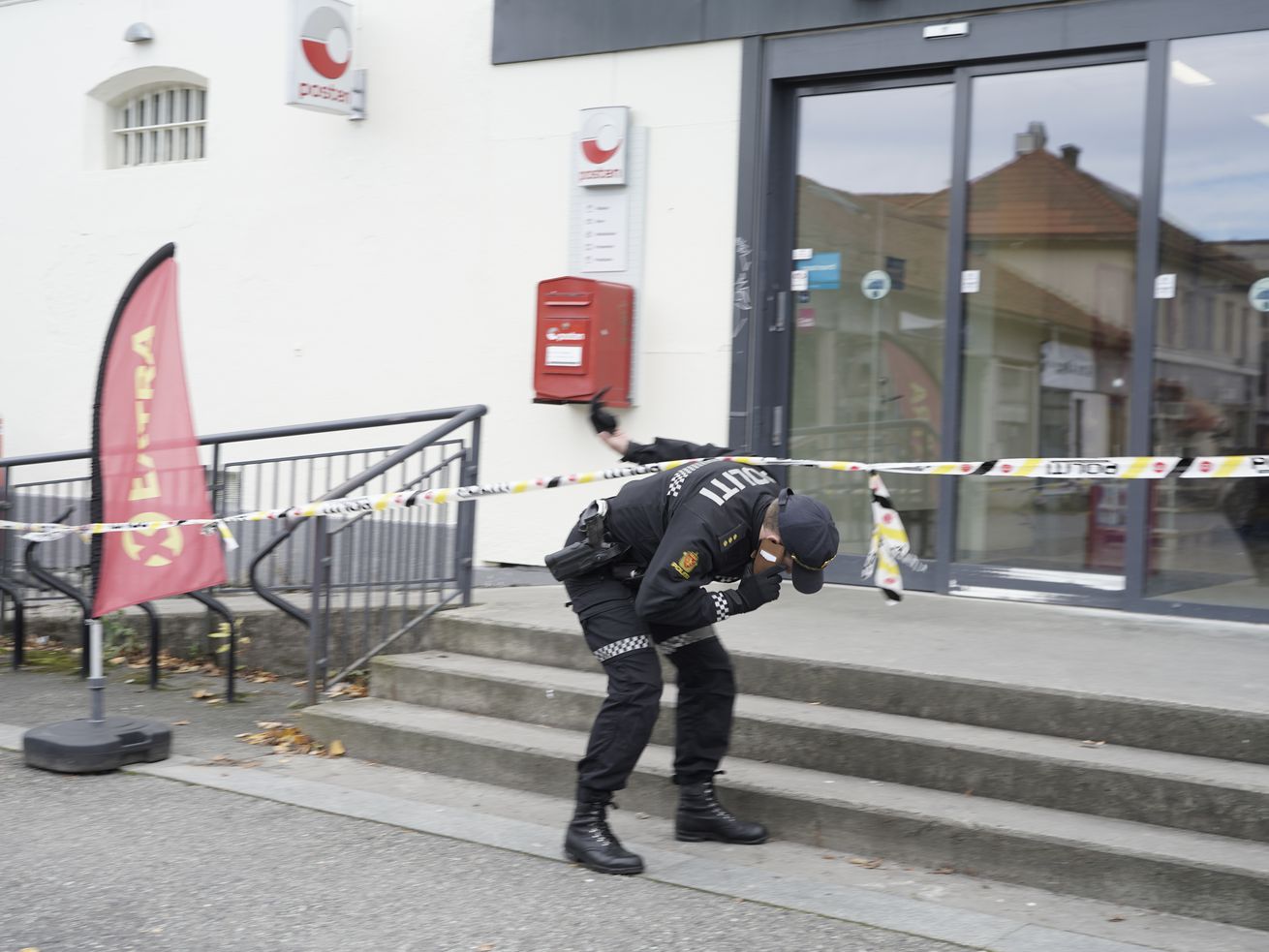 Police search for evidence outside the Coop store in after a man killed several people, in Kongsberg, Norway, Thursday, Oct. 14, 2021. Police in Norway are holding a 37-year-old man from Denmark suspected in a bow-and-arrow attack in a small town that killed five people and wounded two others. | AP

The Wednesday night attack at a supermarket and other locations in downtown Kongsberg, a town of about 26,000 residents not far from Norway’s capital, left the country stunned as police released some details,

KONGSBERG, Norway — A Danish man suspected of killing five people with a bow and arrow and possibly other weapons while randomly shooting at strangers in a small Norwegian town appears to have committed an act of terrorism, authorities in Norway said Thursday.

The Wednesday night attack at a supermarket and other locations in downtown Kongsberg, a town of about 26,000 residents not far from Norway’s capital, left the country stunned as police released some details, including that officers made contact with the 37-year-old suspect but he initially escaped.

“From what we know now, it is reasonably clear that some, probably everyone, was killed after the police were in contact with the perpetrator,” regional police chief Ole B. Saeverud said Thursday. The victims were four women and one man between the ages of 50 and 70. Three other people were injured, police said.

Mass killings are rare in low-crime Norway, and the attack immediately drew comparisons with the country’s worst peacetime slaughter a decade ago, when a right-wing domestic extremist killed 77 people with a bomb, a rifle and a pistol.

People have “experienced that their safe local environment suddenly became a dangerous place,” Norwegian King Harald V said Thursday. “It shakes us all when horrible things happen near us, when you least expect it, in the middle of everyday life on the open street.”

According to police, the suspect in Wednesday’s attack walked around downtown Kongsberg shooting arrows. Police were alerted to the attack around 6:15 p.m. and arrested the suspect about 30 minutes later. Regional prosecutor Ann Iren Svane Mathiassen, told The Associated Press that after the man’s arrest, he “clearly described what he had done. He admitted killing the five people.”

Norway’s domestic security agency, known by its acronym PST, cited various aspects of the attack to explain its belief that the suspect’s actions “currently appear to be an act of terrorism.”

“Attacks on random people in public places are a recurring modus operandi among extremist Islamists carrying out terror in the West,” the agency said. It said “the most probable scenario” for such an attack in Norway “is an attack carried out by one or a few perpetrators with simple weapon types, against targets with few or no security measures.”

“The investigation will clarify in more detail what the incidents were motivated by,” PST said in a statement.

The man arrested Wednesday had been on the security agency’s radar, but the agency did not say why. Police described him as a Muslim convert who was previously flagged as having been …read more

Capt. Kirk’s William Shatner on cusp of blasting into space