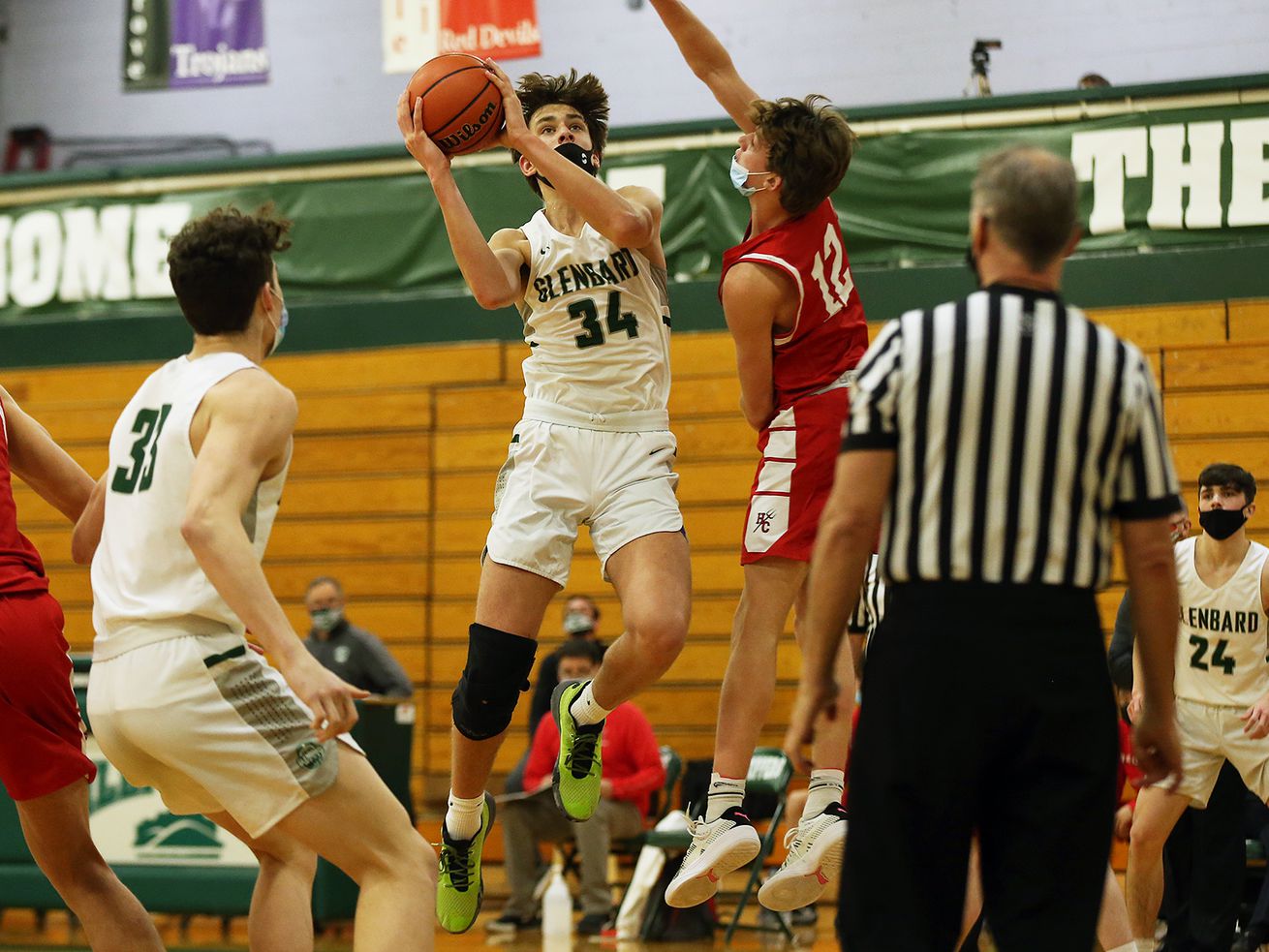 Glenbard West’s Braden Huff (34) switches the ball to his right hand for a shot against Hinsdale Central. | Allen Cunningham/For the Sun-Times

Glenbard West’s Braden Huff did not waste the past year.  The 6-10 junior was rail thin during his sophomore season. Huff used all the downtime during the pandemic to transform his body.

Glenbard West’s Braden Huff did not waste the past year.

The 6-10 junior was rail thin during his sophomore season. Huff used all the downtime during the pandemic to transform his body.

“All that time off gave me time to put some weight on and really focus on that aspect of my game,” Huff said. “As a sophomore teams had a game plan to bump me and beat me. So I think putting on that weight helped take my game to another level, which has been huge.”

Huff said he added about 25 pounds to his frame. The new muscle has been accompanied by a greater aggression on the court. Huff played point guard for a good stretch of the game, showcasing impressive passing ability for such a big, young player.

“Braden has made a massive jump in his development,” Glenbard West coach Jason Opoka said. “It all started with him dedicating himself in the weight room. You can see it with the way he handles the ball and how he enjoys the physicality in the post.”

He finished with 19 points, eight rebounds and five assists in the No. 10 Hilltoppers’ 65-50 win against visiting Hinsdale Central on Tuesday.

“I’ve focused on those [point guard] skills from a young age,” Huff said. “Starting out you never really know when you are gonna stop growing. I feel pretty comfortable with my ball handling ability. So I was glad I was able to do that today for the team.”

Glenbard West (8-0, 2-0 West Suburban Silver) jumped out to multiple big leads during the game but the Red Devils (4-2, 1-1) continually fought back.

“We were kind of tentative at the beginning of the game and we let their length bother us,” Hinsdale Central coach Nick Latorre said. “They are really good. They have so many weapons. But we fought right until the end. Maybe the lesson today is to try to get off to a good start and be more aggressive from the jump.”

Huff’s basket with 3:40 to play put the Hilltoppers ahead by 19 and the game seemed over. The Red Devils ripped off a 16-2 run to cut the lead to just seven points with 1:57 to play. That was as close as it would get as Glenbard West shot 6-for-8 from the free-throw line in the final stretch to secure the win.

Junior Paxton Warden had 17 points for the Hilltoppers and Danny Mulcare added 10 off the bench.

Charlie Sessa scored 12 for Hinsdale Central in the fourth quarter and finished with a game-high 21 points. Ben Oosterbaan chipped in with 16 points and four rebounds and Quinn Cain scored eight for the Red …read more