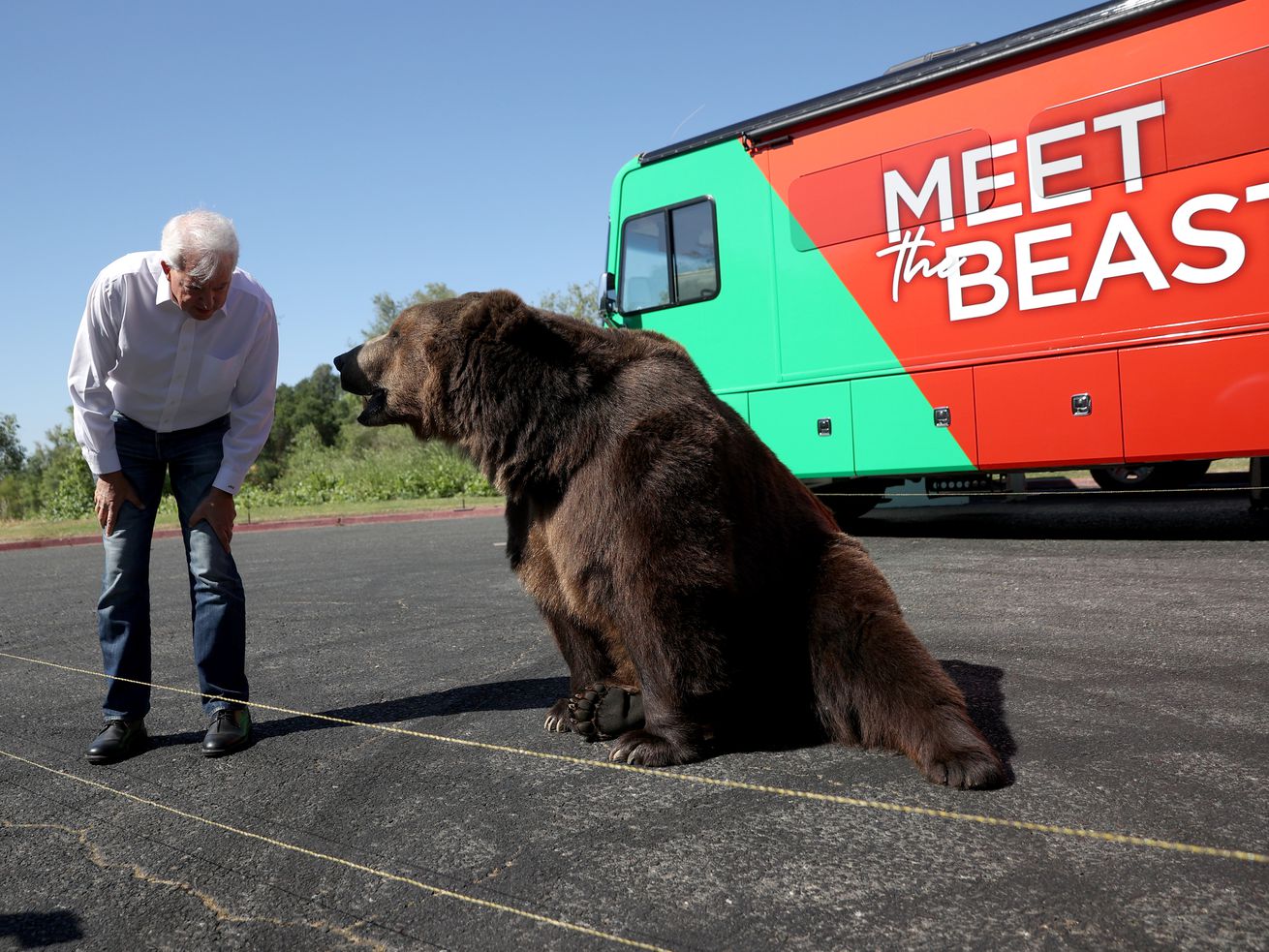 Republican California gubernatorial candidate John Cox greets a 1,000 pound bear at the start of a campaign rally at Miller Regional Park on May 04, 2021 in Sacramento, California. | Getty

Cox, a 65-year-old businessman who lost in a landslide to Newsom in 2018, released a video calling himself “the beast” to the photogenic Newsom’s “beauty.” He also resorted to name-calling reminiscent of former President Donald Trump, repeatedly labeling Newsom a “pretty boy” who lacks governing chops.

Launching a bus tour in Sacramento with a live Kodiak bear named Tag ambling behind him in the hot sun, Cox promised to bring “beastly” changes to state government. He spent $5 million to begin airing a 30-second version on television statewide, his campaign said, a major amount this early in the campaign and indicative of the need to raise his profile in a crowded field.

The stunt was aimed at drawing eyes to his campaign, but he promised to discuss “serious issues” — like bringing down the cost of housing, boosting the state’s water resources and preventing special interests from influencing government.

“You have to get this message out and that’s what we’re going to do here,” he said.

Jenner, meanwhile, released a video with a more inspirational and patriotic tone. She calls herself a “compassionate disruptor” in the ad that features clips from her Summer Olympics appearance in 1976, when she won the gold medal in the men’s decathlon.

Jenner, now a 71-year-old transgender woman, has held no campaign events since announcing her candidacy nearly two weeks ago. A televised town hall in her hometown of Malibu is planned for Wednesday. The ad offers her most expansive commentary as a candidate.

Recipe: This Jacques Pepin dish is a cross between a souffle and flan

“I’m running to be governor for all Californians, to reclaim our true identity, to bring back the gold to the Golden State,” Jenner says in the ad.

The ad shows a photo of Newsom only once and never says his name, though she is clearly blasting his pandemic policies by highlighting closed businesses and kids out of school. Jenner’s campaign didn’t immediately answer whether the campaign was running corresponding ads on television or whether the pitch was digital only.

The release of the ads marked a new phase in the campaign. Later Tuesday, two firefighters unions endorsed Newsom at the governor’s first campaign-style event of the recall.

“This is a big day as we really kick off our efforts to defeat this recall,” the governor said, flanked by more than a dozen firefighters.

He declined to comment on Jenner’s or Cox’s ads. Instead, he pivoted to the state’s efforts on …read more

Latest line: A good week for truck drivers, bad one for SFO

Mom’s reassuring voice remains with me