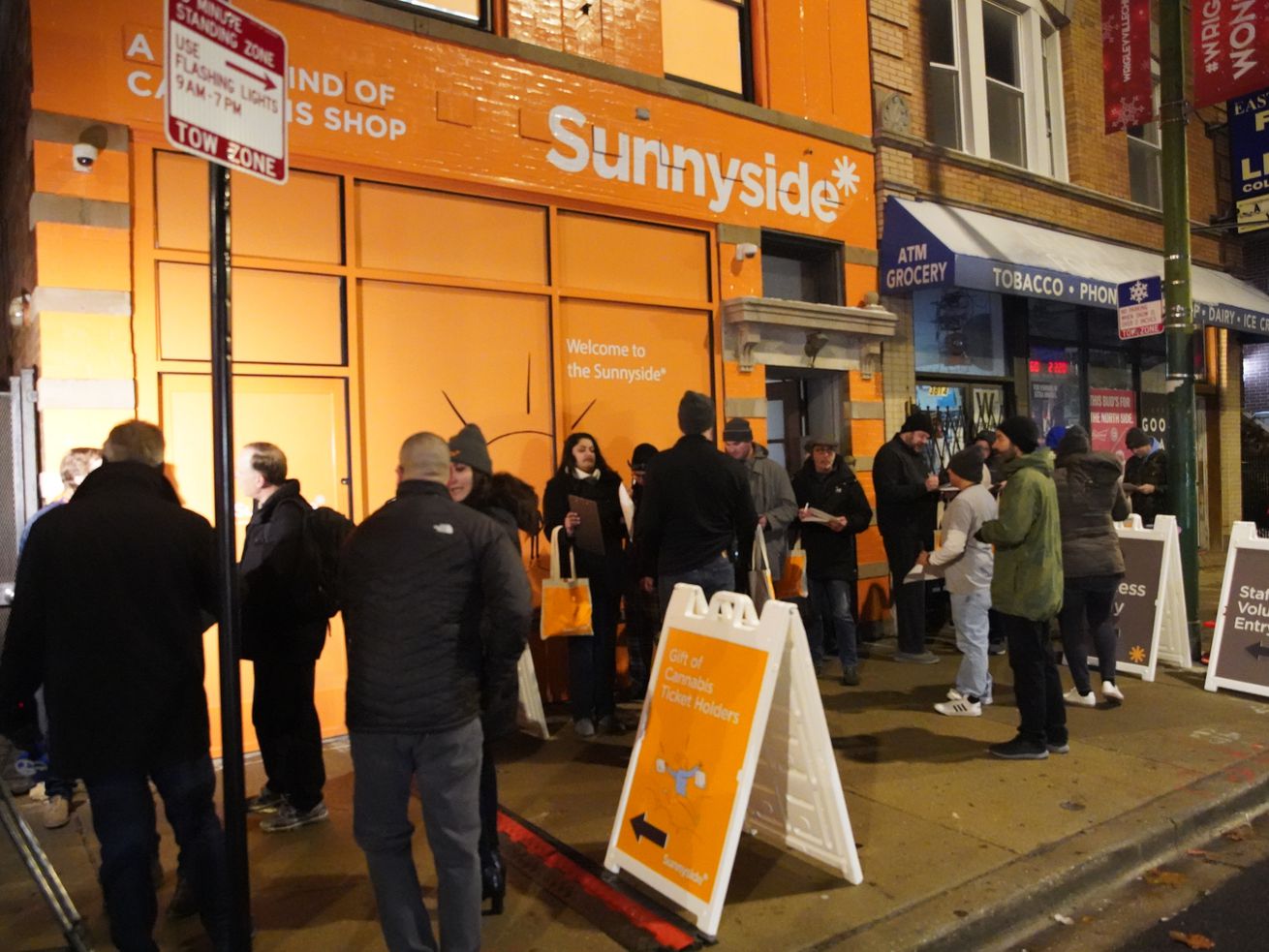 A line formed outside a Lake View marijuana shop on Jan. 1, 2020, the first day of legal sales of recreational pot in Illinois. Now, the Chicago City Council is expected relax zoning requirements for cannabis businesses all over Chicago as a way to help minorities who have been shut out of the so-called “green rush.” | Brian Rich/Sun-Times files

Mayor Lori Lightfoot’s downtown “exclusion zone” would shrink to a narrow band, and zoning requirements for cannabis businesses all over Chicago would be relaxed, under a mayoral plan teed up for approval Tuesday to help minorities who have been shut out of the so-called “green rush.”

The City Council is poised to streamline the zoning process to attract an avalanche of “social equity” applicants — a designation created by the state to try to diversify the lily-white weed industry.

Top mayoral aide Will Shih has blamed onerous zoning restrictions for limiting the number of Chicago dispensaries to 18 out of 110 statewide and the number of marijuana stores in the city to seven, even though five times that many could have opened here.

“Dispensaries and cannabis businesses chose to go to the suburbs, instead of staying in the city,” depriving Chicago taxpayers of $13.5 million in potential marijuana revenues, Shih told aldermen last week.

In addition to opening up far more properties for cannabis operators to call home, the mayor’s plan would eliminate the city’s seven cannabis zones and their underlying license caps and do away with a related zoning lottery.

It would most notably open up a large portion of the downtown area to weed sales, hacking away at an “exclusion zone” Lightfoot previously fought for and defended.

Breaking down the Shohei Ohtani vs. Vladimir Guerrero Jr. AL MVP race and who should win it

“We’re not turning Michigan Avenue into pot paradise,” Lightfoot famously declared in January on the day downtown Ald. Brendan Reilly (42nd) introduced an ordinance that would have nixed the zone altogether.

The downtown exclusion zone currently stretches from Division Street to the north, Van Buren to the south and Lake Michigan to the east. The western boundary is State Street in River North and the south branch of the Chicago River in the Loop.

The new proposal would cut off sales from Division to Van Buren between State and Michigan, with the no-pot zone extending to 16th Street on Michigan. Sales would also be prohibited from Ohio to Illinois streets between Michigan and Navy Pier.

Lightfoot introduced the sweeping zoning changes in July, only to make a series of changes to appease aldermen determined to give minorities a piece of the lucrative pie.

The changes were not enough to satisfy Far South Side Ald. Anthony Beale (9th), the mayor’s most outspoken Council critic.

Arguing that “over 40%” of social equity applicants are “fronts” that are actually white-owned, Beale urged his colleagues to keep Chicago’s onerous zoning restrictions …read more

Already, Sean Desai has a fix-it job on his hands