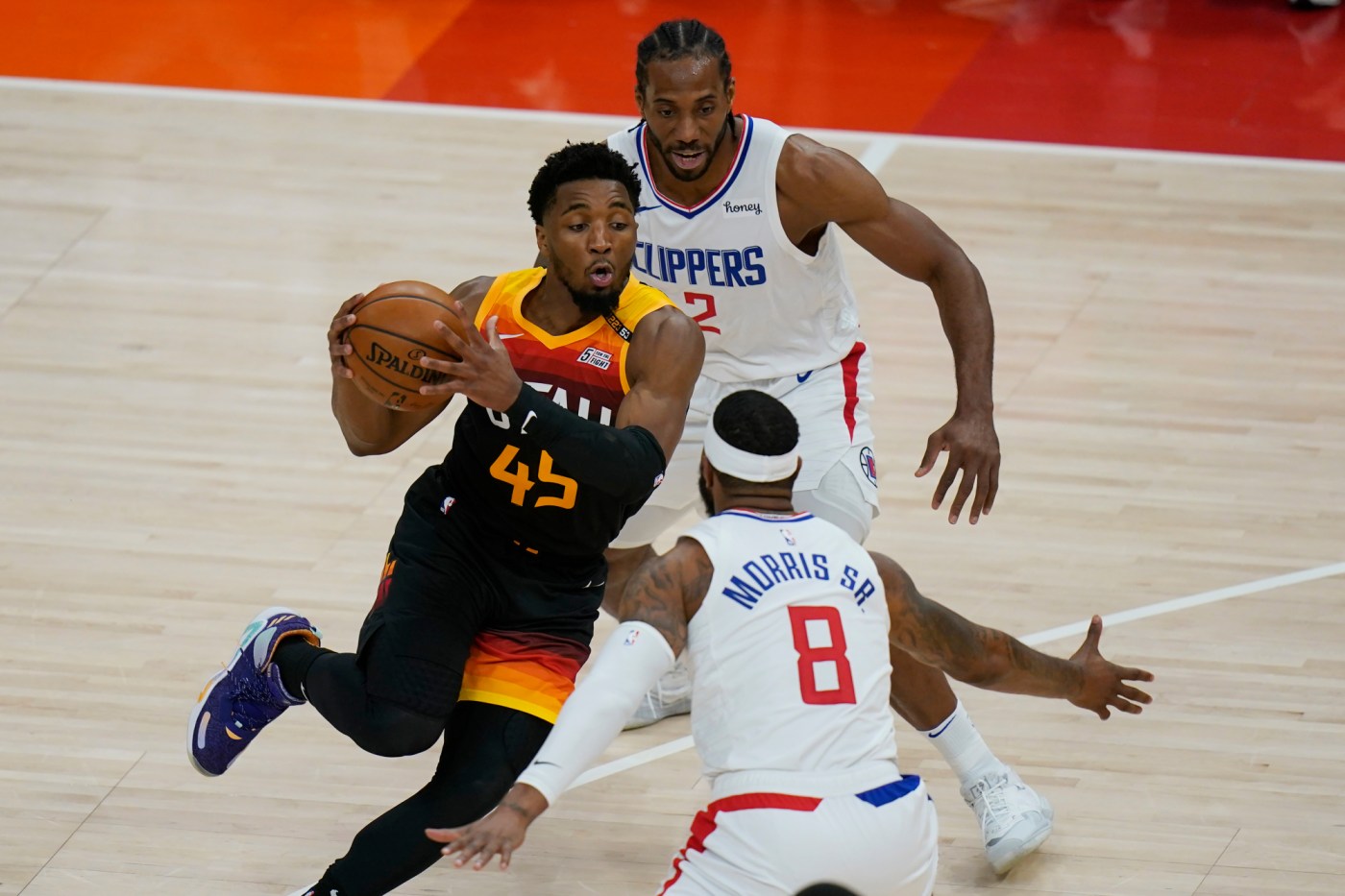 SALT LAKE CITY — The last time the Clippers fell behind 2-0 in a playoff series, back on May 25, they made it a point to express their unwavering confidence.

Reggie Jackson wore a T-shirt adorned with a happy face to his virtual postgame news conference and signed off that night by saying: “No worries. Remember, no worries!”

Clippers Coach Tyronn Lue also was unequivocally calm, shrugging off the Clippers’ first two losses at Staples Center: “I am not worried about it,” he said. “You gotta win four games; that’s what it is. They won two games on our home floor and now we got to go return the favor.”

And, yes, the Clippers did, winning every game in Dallas before closing out the first round with a win in Game 7, their only victory at Staples Center.

Now Lue’s fourth-seeded squad is down 2-0 again in their best-of-seven Western Conference semifinal series against the top-seeded Utah Jazz. It wasn’t quite the same man-we-got-this message from Jackson and Lue on Thursday night in Salt Lake City, where they spoke postgame Thursday about having faith and keeping hope alive – despite history not being on their side. No NBA team has overcome multiple 2-0 series deficits in the same postseason, per ESPN.

“We’re going to have trust each other, honestly,” Jackson said after Thursday’s 117-111 loss. “Have faith and trust that we are going to get this Game 3.”

Lue sat, arms crossed, and he was relatively pointed in his comments: “First of all, just taking the challenge one-on-one against Donovan (Mitchell) and when he gives the ball up, it’s not just him. We are getting beat out the dribble by other guys, too.”

And after that, Lue said: “We just got good shots and we didn’t make them. Hopefully next game, they go down.”

As the series heads to Staples Center for Games 3 and 4, the Jazz will be a tougher code to crack than Luka Doncic and his upstart Dallas Mavericks.

If the Clippers thought they’d steered clear of the dangerous rising superstar by eliminating the Mavericks, Mitchell has made them rethink that notion.

The 24-year-old guard’s 45-point contribution in Game 1 marked his third playoff game in just 28 postseason outings with at least that many points – putting him in the company of Michael Jordan, Wilt Chamberlain and Allen Iverson.

As an encore in Game 2, he poured in 37 more – and bolted out of the blocks. Mitchell threw the proverbial first punch Thursday – it took him just 3:14 to score 10 points – that knocked the Clippers backward and forced them to have to expend significant energy just to rally from what became a 21-point deficit.

“You just can’t dig holes like that, especially on the road and playing from behind like that,” Lue said. “And we talked about getting off to good starts. Once again, Donovan Mitchell got the most of a great start and they just kind of took off from there.”

Ultra-aggressive so far, Mitchell has almost as many points (82) as Leonard …read more