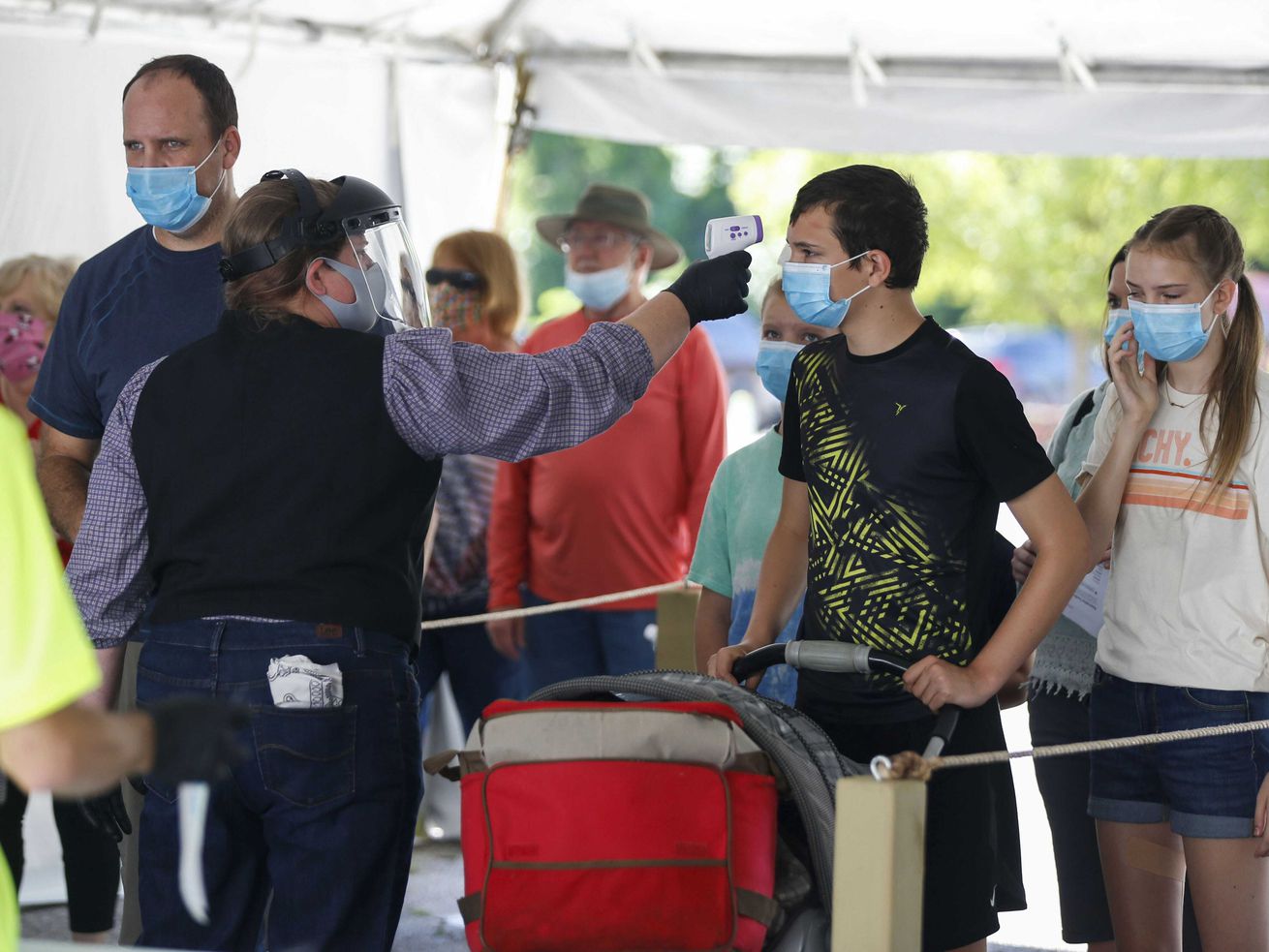 In this June 13, 2021, file photo, a Silver Dollar City employee takes the temperature of guests before they are allowed to enter the park just west of Branson, Mo. Missouri’s health department is reporting the highest daily count of new COVID-19 cases since the dead of winter, and the association representing the state’s hospital has warned that the health care system is potentially on the brink of a crisis. | AP

Just 56.2% of Americans have gotten at least one dose of the vaccine, according to the Centers for Disease Control and Prevention.

MISSION, Kan. — COVID-19 cases tripled in the U.S. over two weeks amid an onslaught of vaccine misinformation that is straining hospitals, exhausting doctors and pushing clergy into the fray.

“Our staff, they are frustrated,” said Chad Neilsen, director of infection prevention at UF Health Jacksonville, a Florida hospital that is canceling elective surgeries and procedures after the number of mostly unvaccinated COVID-19 inpatients at its two campuses jumped to 134, up from a low of 16 in mid-May.

“They are tired. They are thinking this is déjà vu all over again, and there is some anger because we know that this is a largely preventable situation, and people are not taking advantage of the vaccine.”

Across the U.S., the seven-day rolling average for daily new cases rose over the past two weeks to more than 37,000 on Tuesday, up from less than 13,700 on July 6, according to data from Johns Hopkins University. Health officials blame the delta variant and slowing vaccination rates. Just 56.2% of Americans have gotten at least one dose of the vaccine, according to the Centers for Disease Control and Prevention.

In Louisiana, health officials reported 5,388 new COVID-19 cases Wednesday — the third-highest daily count since the beginning of the pandemic in early 2020. Hospitalizations for the disease rose to 844 statewide, up more than 600 since mid-June.

DOJ drops charges against visiting Chinese researchers, including one at UC Davis

Utah reported having 295 people hospitalized due to the virus, the highest number since February. The state has averaged about 622 confirmed cases per day over the last week, about triple the infection rate at its lowest point in early June. Health data shows the surge is almost entirely connected to unvaccinated people.

“It is like seeing the car wreck before it happens,” said Dr. James Williams, a clinical associate professor of emergency medicine at Texas Tech, who has recently started treating more COVID-19 patients. “None of us want to go through this again.”

He said the patients are younger — many in their 20s, 30s and 40s — and overwhelmingly unvaccinated.

As lead pastor of one of Missouri’s largest churches, Jeremy Johnson has heard the reasons congregants don’t want the COVID-19 vaccine. He wants them to know it’s not only OK to get vaccinated, it’s what the Bible urges.

UK man arrested in Spain, charged in US with Twitter hack