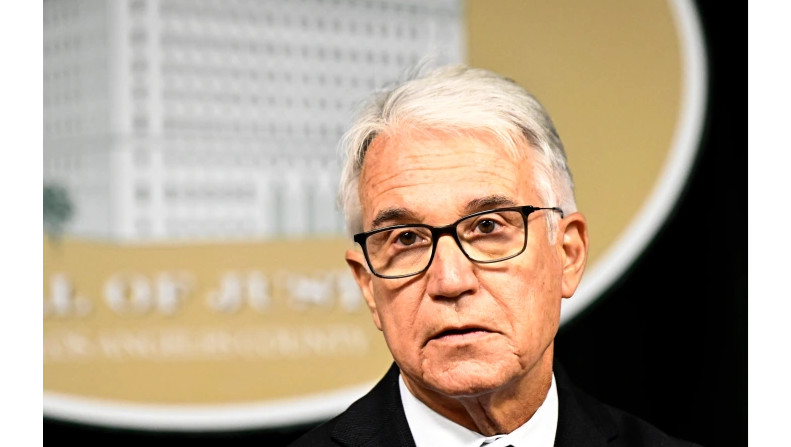 A man arrested in the slaying of a transient in Pacoima was released from prison last year after serving just eight years of a life sentence for a double murder because District Attorney George Gascón refused to transfer his case from juvenile to adult court, the Southern California News Group has learned.

Victor Bibiano, 30, was taken into custody last month for the April 16 killing of 42-year-old Mario Rodriguez, who was found shot at a transient encampment at Dronefield Avenue and Terra Bella Street in the foothill area of Pacoima.

Bibiano was 17 when he and two co-defendants were convicted in adult court in 2012 in the killing of two rival Pacoima gang members and the wounding of a third in 2009. Bibiano was sentenced to life without the possibility of parole for a special-circumstance double murder, attempted murder, and shooting a firearm at an inhabited dwelling, as well as gun and gang enhancements, according to court records.

“We extend our deepest sympathies to the loved ones of Mario Rodriguez,” Gascón said in a statement Tuesday, adding that a preliminary investigation has revealed the homicide occurred during a robbery and drug deal.

“We have charged Victor Bibiano in connection with that crime, although evidence to date suggests he did not personally shoot or kill Mr. Rodriguez,” he added. “As it is an open case, we cannot discuss the facts in any greater detail.”

‘I know that people are angry’

Gascón also acknowledged the criticism of his policies, which detractors have characterized as soft on crime. But he said it’s important to stay the course to reform the criminal justice system.

“I know that people are angry, and I am angry, too,” he said. “But we cannot use single tragedies to make policy. One person’s failure cannot lead us to doubt the potential of everyone else. In other Los Angeles cases where juveniles previously sentenced to life have been released, including Mr. Bibiano’s original co-defendant, the results have been overwhelmingly positive.

“We will not play politics with this or any other tragedy. We are so sorry for those who lost a loved one, and we will make sure all those involved are held accountable.”

Under Proposition 57, which was approved by California voters in 2016, all minors convicted in adult court must receive a transfer hearing in juvenile court to determine if they should be tried again as an adult. The measure, which changed juvenile justice laws, was designed to enhance public safety and discourage recidivism by emphasizing rehabilitation.

In the fall of 2020, Bibiano’s conviction in adult court was vacated under Proposition 57 and his case was sent to juvenile court to await a transfer hearing. In December that year after Gascón assumed office, he immediately instituted a ban on trying anyone again in adult court if he or she was a minor when the crime was committed.

Alysa Blair, who was brought over from the Los Angeles County Public Defender’s Office to serve as Gascón’s special assistant, took over …read more

A golfer angrily threw his putter off the green and then later snapped a club in U.S. Open meltdowns

Pac-12 football salaries: Whittingham’s new deal and our look at the most overpaid (and underpaid) coaches