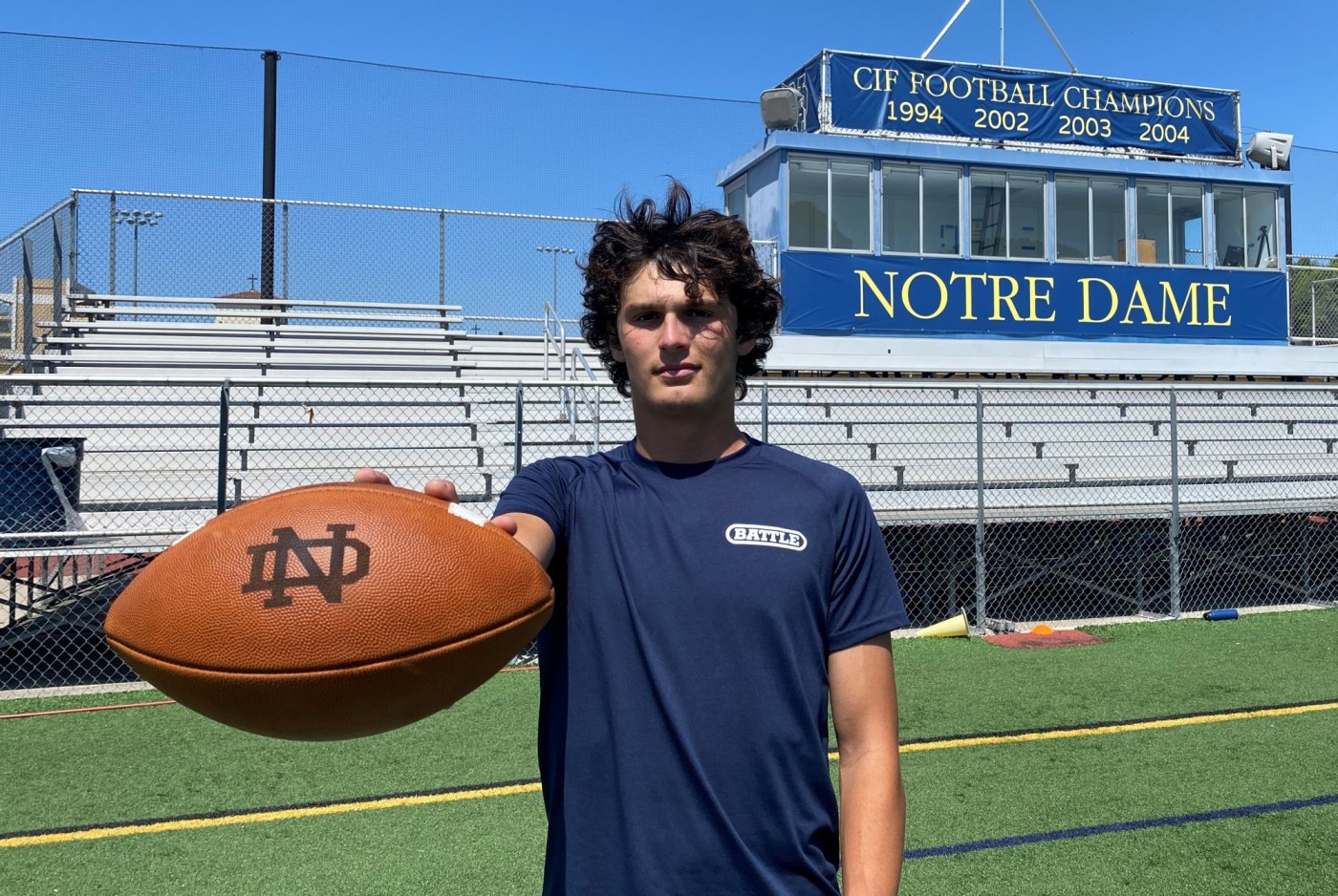 “You want to talk to Wyatt?” McNab asked quickly.

Local media, scouts and all the personnel in between are coming to catch a glance of highly-touted sophomore quarterback Wyatt Becker, who’s garnered 16 NCAA Division I offers already including Oregon, Ole Miss, Georgia, Penn State and Florida State.

The 6-foot-1, 175-pound underclassman played in nine games last season, switching off with Javance Tupouata-Johnson, who’s since transferred to Chaminade. Becker didn’t exactly dazzle in his time at quarterback for the Knights, but what freshman in the Mission League does?

“I dealt with some pressure last year as a freshman,” Becker said. “I played against Alemany and Bishop Amat, so there isn’t much I haven’t seen. I’m confident.”

Sophomore Wyatt Becker of SO Notre Dame showing he can find secondary target and fire a bullet. pic.twitter.com/r5P3Nr0vGm

Becker has impressed in camps since he was in middle school, which has helped him garner all the recruiting attention. But now it’s time to show it on the field.

“I’m trying to block out what other people are saying about me, even though a majority of it is good,” Becker said. “I just keep working and focus on myself and the team.”

Becker and Notre Dame will play its season opener at Crespi on August 19 at 7 p.m.

Johnson is the most physically gifted quarterback in the area at 6-foot-5, 215 pounds, but has yet to surpass 1,000 yards passing in his career. He started at Alemany, transferred to Notre Dame for two seasons and will now play his senior year at Chaminade.

Staub, a transfer from Sierra Canyon last year, helped West Ranch have its best season in program history (including its first-ever win over Valencia) as a junior. He passed for 2,414 yards and 21 touchdowns. He also ran for six scores.

Dieffenbach, who stands 6-foot-6, threw for 2,669 yards and 34 touchdowns last season. He was a Daily News 2021 All-Area first-team selection.

Ty Dieffenbach to Caden Colabella for a 21-yard TD. Agoura won’t go away.

Jacobs might be the most underrated quarterback prospect in Southern California. The 6-foot-6, broad-shouldered righty will have a breakout season with an upgraded wide receiver corps that second-year head coach Dean Herrington is excited about.

OTHER QUARTERBACKS TO WATCH