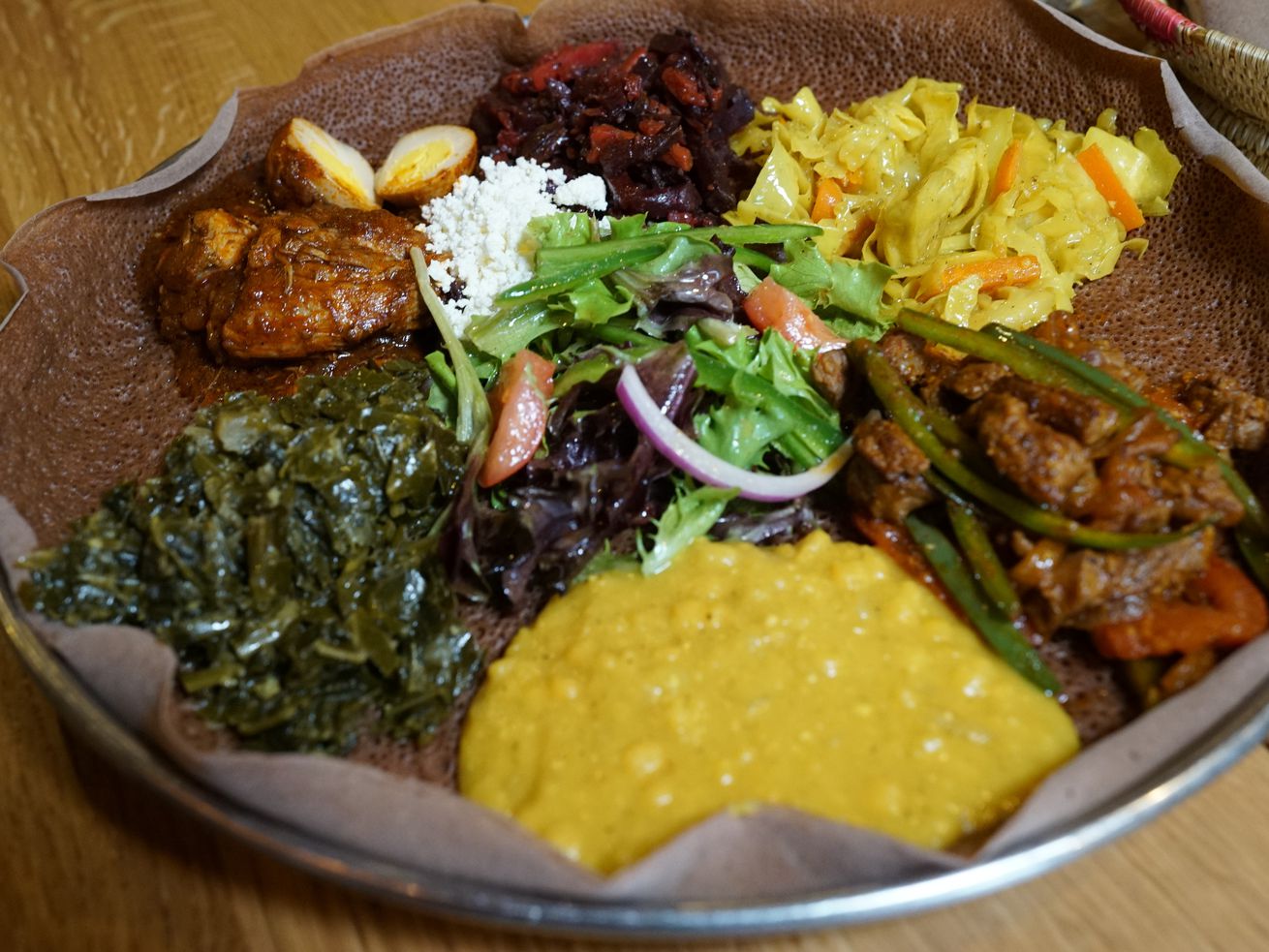 One of the Demera’s most popular menu items is the chef’s selection messob, which is a sampling of different proteins and vegetables.

What’s cookin’ in and around Chicago? Here’s a closer look at one of the area’s delicious dishes you don’t want to miss.

Growing up in Ethiopia, Demera owner Tigist Reda spent a lot of the time in the kitchen alongside her mother.

“There was no carryout when I was growing up at least,” said Reda, who has 10 siblings. “We were always cooking, kind of like a restaurant.”

Reda loved to cook, especially for other people, but she never aspired to open a restaurant of her own. After she moved to the United States in the early 2000s, she worked several years as a home chef, cooking for various clients.

Brian Rich/Sun-Times
The “chef’s selection” messob is served with injera bread at Demera restaurant in Uptown.

However, when a restaurant space in Uptown opened up at the corner of Lawrence and Broadway Avenues, Reda couldn’t help but pounce on the opportunity to open a place of her own.

Reda opened Demera in 2007 in hopes of sharing her culture’s hospitality and authentic and colorful Ethiopian dishes to Chicagoans. It hasn’t always been easy — she’s had her fair share of growing pains as a rookie restaurateur — but over the years, Demera has become one of the city’s favorite Ethiopian dining spots.

Known for its flavor and spices, Reda calls Ethiopian food an “experience.” Some of her favorite dishes are served family style and meant to be shared with a table of people.

A typical Ethiopian dish consists of spicy stew (wot), sautéed meats (tibs) — such as beef, chicken and lamb — a variety of vegetables and/or legumes. Meals are meant to be eaten with your hands, or diners can use injera bread to scoop up bites.

Injera bread is traditionally made out of water and teff flour, which is naturally gluten free flour. Rida lets that ferment over three to four days before mixing the batter with wheat to add gluten or cooks it up as is on a crepe griddle as a gluten-free option.

Injera bread has a tangy flavor, similar to sourdough bread. It looks like a very thin pancake, but it has a spongy texture, which helps it absorb the flavors of the sauces.

Injera bread can be served as a side for a lot of dishes, like Doro Wot, an Ethiopian chicken stew.

Miss Manners: I made a mistake when I met the priest

For the traditional dish, bone-in chicken cooks for about an hour and a half in berbere sauce, a rich tomato-based sauce that contains more than 10 spices, including garlic, ginger, chili powder and onion. Demera makes 10 to 15 gallon batches of the red sauce at a time, Reda said.

Doro Wot is served with a hard-boiled egg and ayib (farmer’s cheese). The cheese helps cut the spiciness of the stew.

While Doro Wot is good on its own, Reda said it’s better to be shared with others. That’s why the chef’s selection …read more

Q&A: California reopens next week — Can I trash all my COVID masks?

After HOA banned their Pride flag, couple got creative