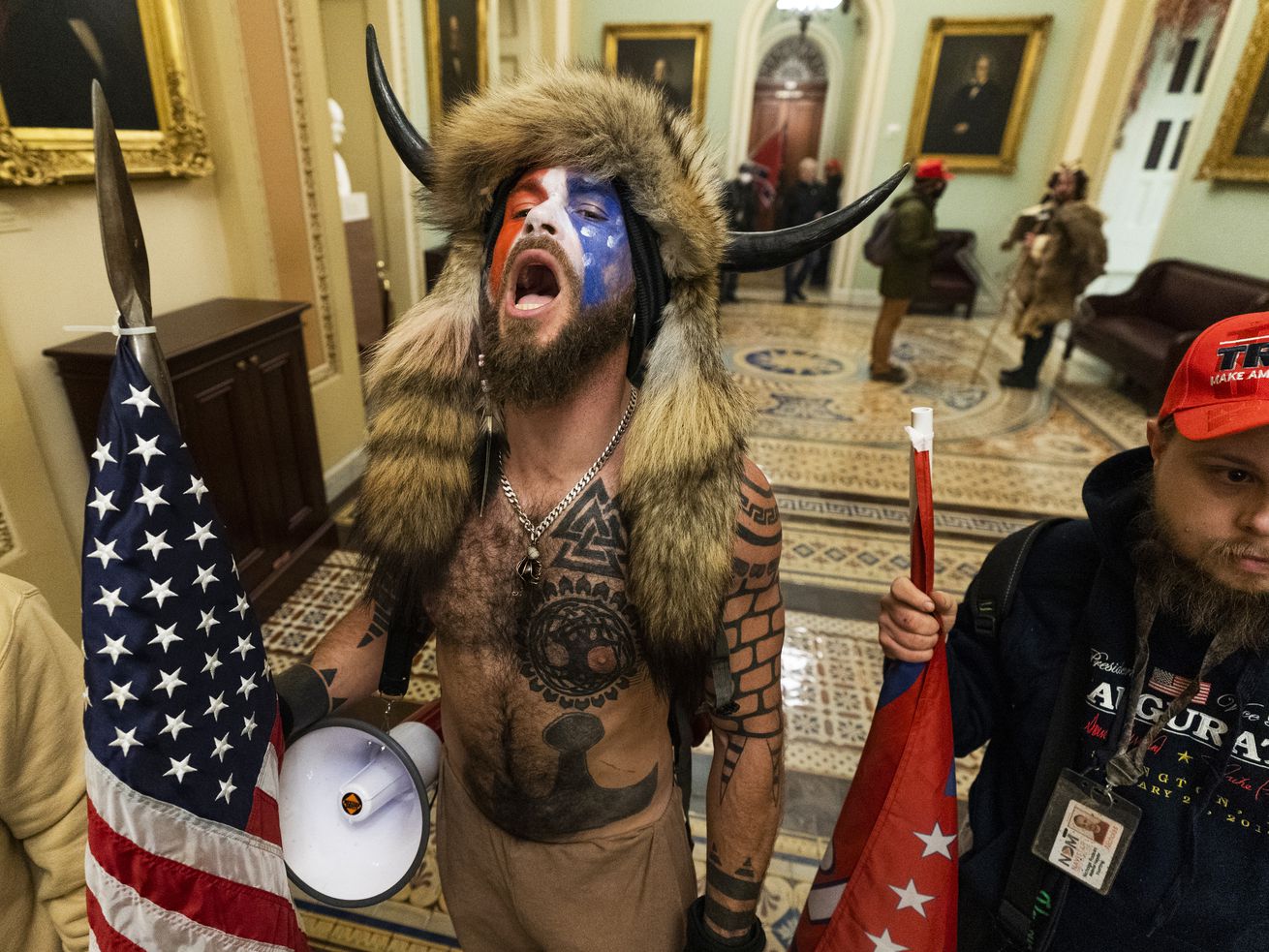 Jacob Anthony Chansley, center, with other insurrectionists who supported then-President Donald Trump, are confronted by U.S. Capitol Police in the hallway outside of the Senate chamber in the Capitol, Jan. 6, 2021, in Washington. Chansley was among the first group of insurrectionists who entered the hallway outside the Senate chamber. | Manuel Balce Ceneta, Associated Press

Utah Sen. Mike Lee complained Tuesday that the Department of Justice has failed to answer questions about whether the agency treats rioters who stormed the U.S. Capitol last January harsher than those who took part in violent protests across the country in 2020.

In a letter to the DOJ last June, Lee and four other Republican senators demanded responses to a long list of questions comparing and contrasting the two investigations.

“DOJ’s apparent unwillingness to punish these individuals who allegedly committed crimes during the spring and summer 2020 protests stands in stark contrast to the harsher treatment of the individuals charged in connection with the January 6, 2021, breach of the U.S. Capitol Building in Washington, D.C.,” the letter says.

Lee said his office didn’t receive a response until 4 ½ months, and it didn’t address any of the questions.

“It was a statement of platitudes and cited publicly available resources about general policies. There was not one answer to a single one of our questions,” he said.

Lee had the chance to ask some of those questions Tuesday in a Senate Judiciary Hearing on domestic terrorism. But Matthew Olsen, the assistant attorney general over the DOJ’s National Security Division, and Jill Sanborn, executive assistant director of the FBI’s National Security Branch, didn’t have any answers for him.

Lee’s questions included whether federal law enforcement used cellphone data to track protesters in 2020 as well as how many were arrested in pre-dawn raids with SWAT teams or were served with search warrants. He also asked how many “witnesses” to the events of Jan. 6 were arrested in those ways.

Sanborn didn’t have any numbers but the mechanics of an arrest are specific to each individual case and what threat that person may or may not pose.

Lee suggested in a Senate hearing last March that the FBI might be inappropriately interviewing people who were in Washington on Jan. 6 but didn’t enter the Capitol or participate in the violence. He said he had heard a number of accounts of people who were in the city that day but didn’t go near the Capitol who were “inexplicably” contacted by FBI agents who apparently were aware of their presence.

Jeffrey D. Allred, Deseret News
A protester throws a water bottle at police in Salt Lake City on May 30, 2020. Protesters joined others across the nation to decry the death of George Floyd, a Black man, who died while being taken into custody by police in Minneapolis earlier this week.

To date, the DOJ has charged more than …read more

Golden Globes 2021: The Complete List of Nominees | Entertainment Weekly
49ers head to Green Bay for another playoff matchup with Packers

Kings hold off Rangers for 4th win in 5 games