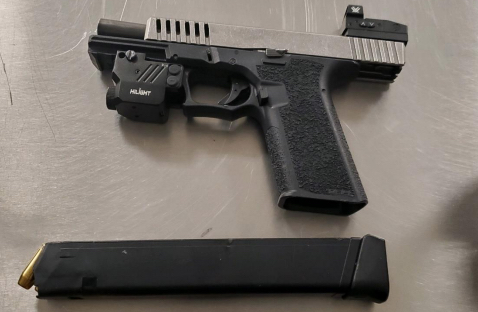 OAKLAND — A Bay Area man was sentenced to 46 months in federal prison for being a prohibited person in possession of an untraceable pistol, court records show.

Ehrman was arrested in May 2021 after a 911 caller witnessed him crash a new BMW into a pole in a parking lot on Hacienda Crossing in Dublin. When police arrested Ehrman a short distance away, the officer believed he was under the influence of drugs or alcohol, according to court records.

A pistol that had been assembled from an online kit was found in Ehrman’s possession, according to prosecutors. The gun was unregistered and had no serial number, and was loaded with an extended magazine.

Ehmran’s attorney wrote in court records that he needs mental healthcare and support of his family, not prison time, but that he faces a reckless driving case in San Mateo County that makes him eligible for a life sentence.

In February, Chhabria ruled prosecutors couldn’t use two statements made by Ehrman during his arrest because police questioned him without reading his Miranda rights first. The ruling allowed Ehman’s responses to questions that involved “officer safety,” including an officer’s questions about whether Ehman possessed anything police should be concerned about.

Ehman has filed an appeal of his sentence.

On NATO, McConnell nudges GOP away from Trump-era approach