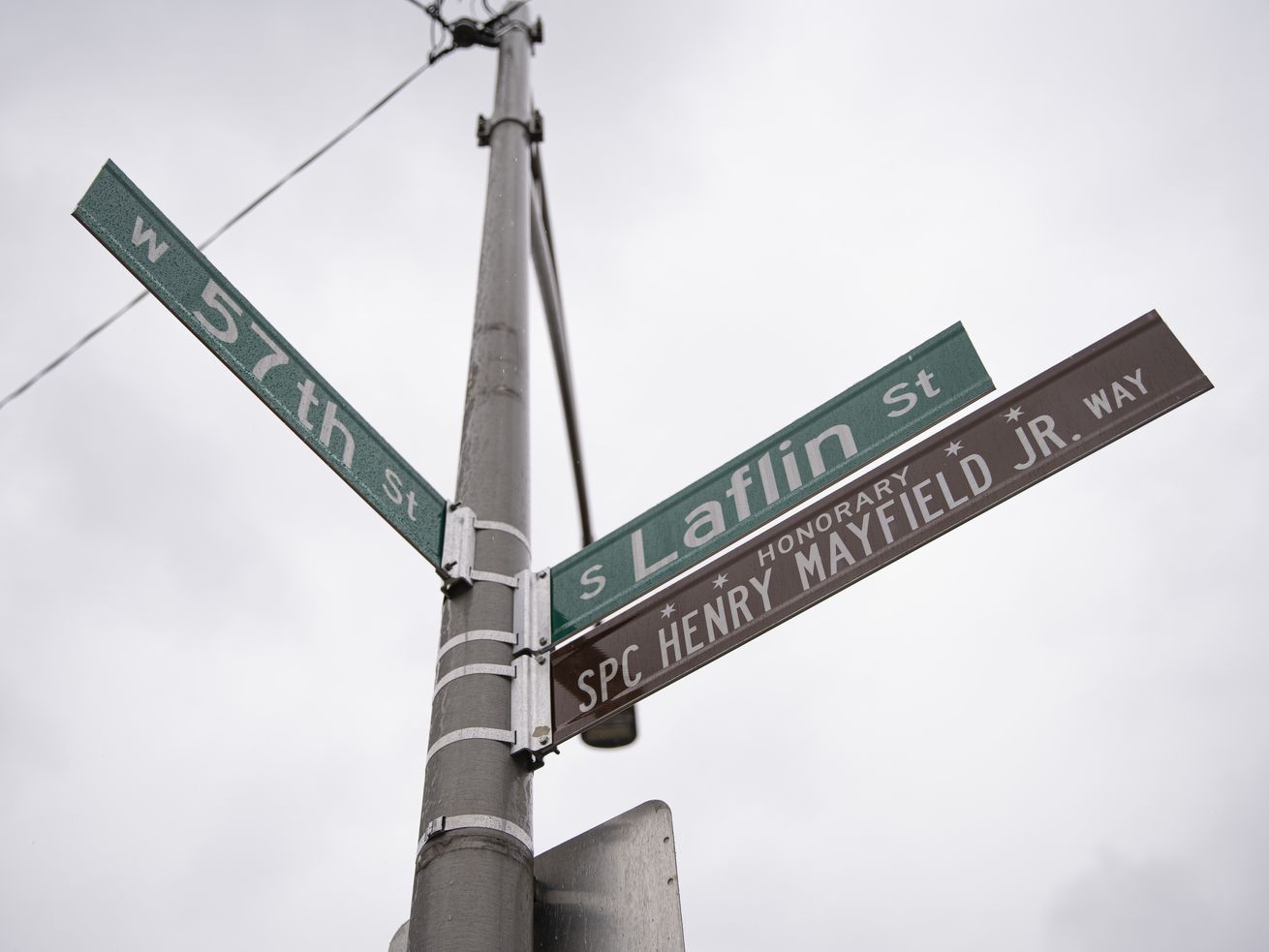 The 5600 block of South Laflin Street is now named for Army Spc. Henry “Mitch” Mayfield, who was killed on Jan. 5 in an extremist attack at Manda Bay Airfield.

Less than a year after U.S. Army Spc. Henry “Mitch” Mayfield Jr. was killed in a terrorist attack at an airfield in Kenya, his old block in Englewood was officially renamed in his honor.

Dozens of Mayfield’s family members, friends and fellow servicemen weathered the cold fall temperatures and intermittent rain to catch the unveiling of a new honorary street sign at the intersection of 56th and Laflin streets — now ceremoniously known as 56th and Spc. Henry Mayfield Jr. Way.

For Mayfield’s father, Henry Mayfield Sr., having his son’s name memorialized “is just everything.”

“Henry ran these streets right here. Crashing that big wheel, crashing that bike,” Henry Mayfield Sr. said during a news conference. “Everybody loves him. We’re all here for him.”

Mayfield, who would have turned 24 last week, was killed in a Jan. 5 assault at the Manda Bay Airfield, where about 200 U.S. troops are stationed. Al-Shabab fighters, who in Somalia have waged an insurgency against a U.S.-backed government, took credit for the attack.

Just five days after he was killed, Mayfield’s cousin Milka Overton approached Ald. Stephanie Coleman (16th) as she petitioned to rename the small patch of Englewood.

“I was a mess,” Overton said, fighting back tears as she recalled that initial meeting. “She didn’t shut her door on me. She listened to me.”

Coleman, who was elected last year, said she was immediately touched by Mayfield’s story, noting that he “gave his life in the most honorable way.” Before to displaying the new signage, Coleman told the crowd her 16th Ward hasn’t renamed a street in “over five years.”

Mayfield childhood home now sits vacant after he and his family relocated to Crestwood when he was in high school. Sunday’s ceremony was attended by a handful of officials from that south suburban village, which has also renamed a street in Mayfield’s honor.

Hazel Crest Mayor Vernard Alsberry, a veteran of the U.S. Air Force, told Coleman’s family the young serviceman “gave the ultimate sacrifice for our country and for our community.”

“Your son’s a hero,” Alsberry said. “It’s always a pleasure to honor a hero.”

In an era of legalized wagers, boxing must become more transparent about injuries