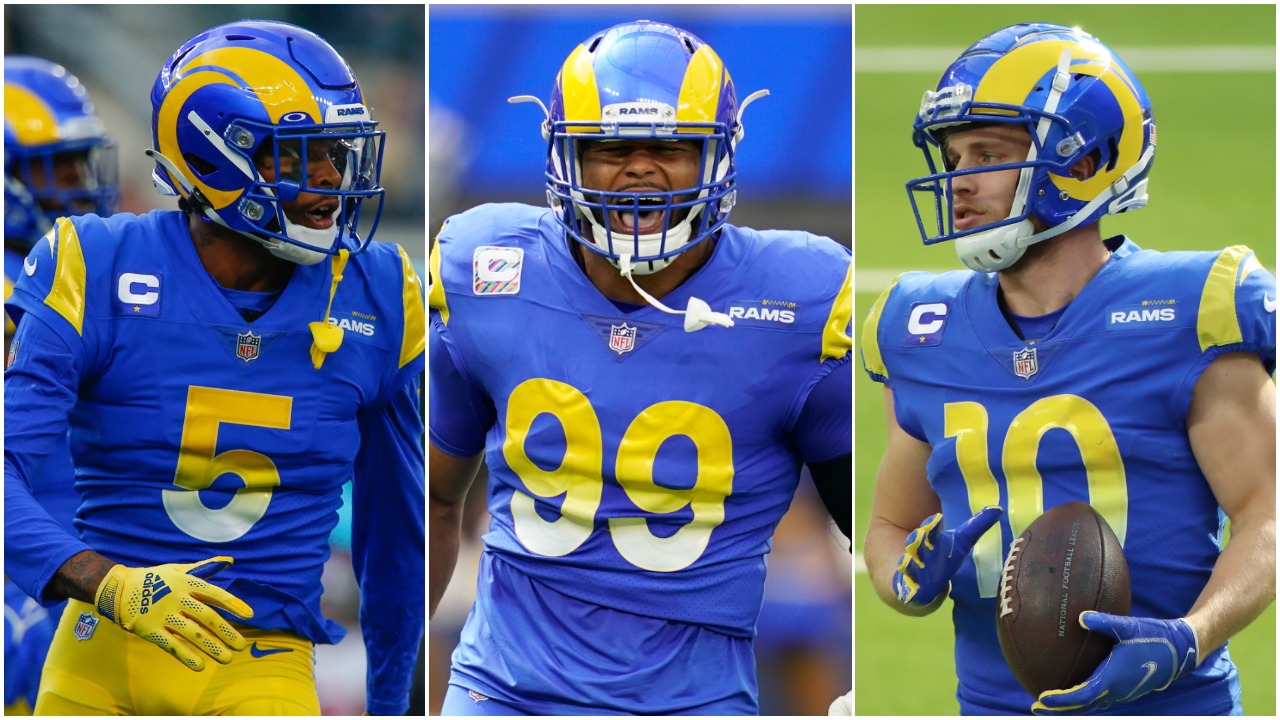 The Rams’ website showed a photo gallery this week of celebrities in the crowd at a recent game, giving top billing to Kate Hudson, Tyga, Katie Austin, will.i.am, Leslie Mann and Judd Apatow.

This did little to change the impression that even here in Hollywood, the biggest stars at any Rams home game these days are in uniform.

On Friday, SoFi Stadium’s reputation as a gridiron Walk of Fame grew when the Rams’ Cooper Kupp joined perennial honorees Aaron Donald and Jalen Ramsey on the Associated Press’ 2021 NFL All-Pro team. Four other current Rams have been All-Pros before: Andrew Whitworth, Von Miller, Eric Weddle and Johnny Hekker. Two others have been Pro Bowl selections but not All-Pros: Matthew Stafford and Odell Beckham Jr.

Stafford, Miller, Beckham and the un-retired Weddle were acquired this season.

“It is surreal when you look at it,” Donald said of playing with so many stars. “With the players we’ve got, we’ve got to take advantage of it this year.”

Trying to get to the Super Bowl at SoFi Stadium on Feb. 13 begins with a home-field playoff opener against the Arizona Cardinals on Monday night.

As any number of sports franchises can attest, having a lot of stars doesn’t always equate to championships.

“Yeah, it doesn’t always equate to that, but it couldn’t hurt, right?” said Ramsey, an All-Pro for the fourth time.

It can hurt if fitting star salaries under the salary cap causes depth issues elsewhere in the roster; Rams players have four of the NFL’s 25 biggest contracts, the most of any team in the league. It can hurt if star personalities clash or jealousy develops. And it can hurt if expectations become unreachable.

But Rams management, coaches and the stars themselves seemed to keep that from happening during a 12-5 season that included an NFC West title.

“Particularly when you’re talking about a guy like Jalen Ramsey, those are like the best moments of my coaching career,” Morris said. “Being able to handle the Jalen Ramseys, the Aquib Talibs, the guys that are so great that they just take it to a whole new (level) of that ability.”

Rams offensive coordinator Kevin O’Connell learned personality management from the best as a backup to Tom Brady on Bill Belichick’s New England Patriots teams in the 2008 season and 2009 training camp.

“One of the things I always thought Belichick did an unbelievable job of was holding the veteran best players on our team to the same accountability that every man on the roster was held to,” O’Connell said.

Donald said that has been an objective of his since he realized, after his first few years in the league, that young teammates tried to emulate what he did.

“I’m a guy that leads by example,” he …read more