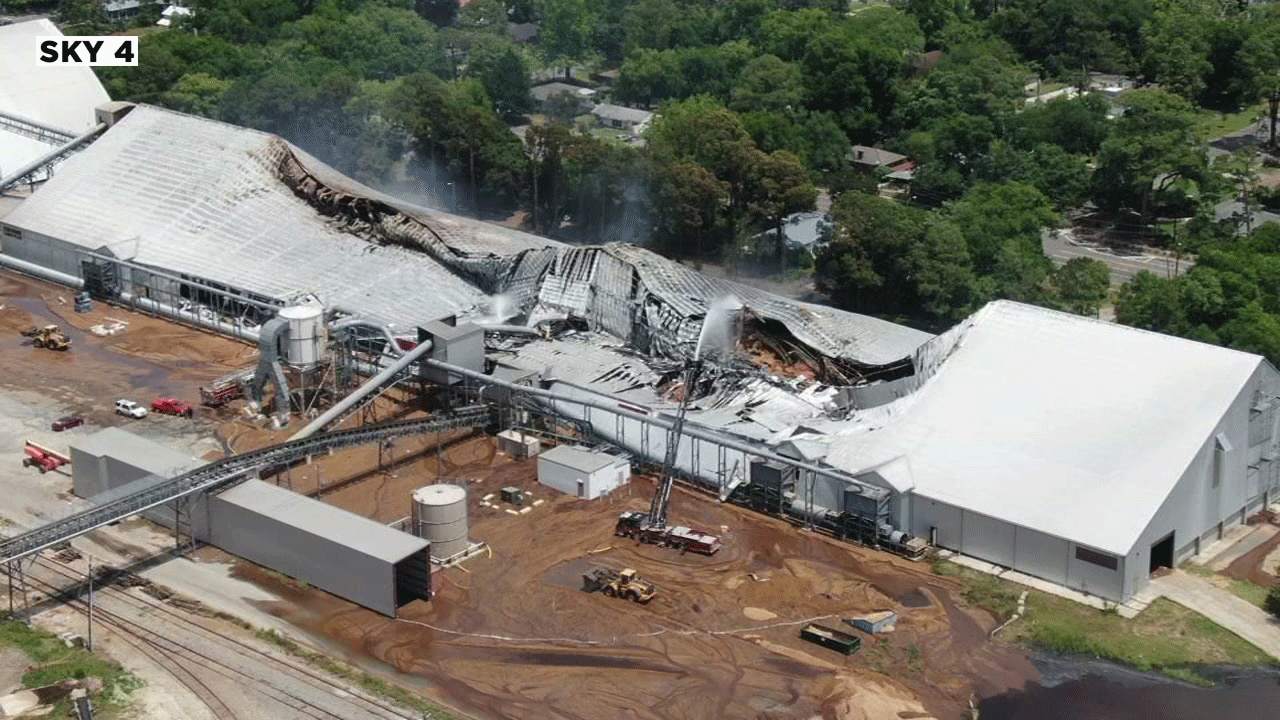 A massive warehouse fire in Brunswick continues to smolder, and at times burn, as the fire marshal investigates the cause.

The Logistec warehouse at the Port of Brunswick caught fire Sunday night after an explosion. It was filled with wood pellets used for biofuel, which are shipped to Europe.

Chief Randy Mobley said his firefighters and responders from at least eight other agencies have been working around the clock to put out the flames and smoke. He said one ladder truck, pumping water from the river, has already doused the warehouse with 4 million gallons of water.

“As long as we have this amount of pellets, this close to a residential neighborhood, we are concerned,” Mobley said as he watched from the front lines.

He met with the company’s executives, the mayor and the fire marshal. They’re all trying to figure out how to stop the flames once and for all.

It’s not the first fire, according to Mobley. He said his crews have put out several fires, including a massive one in July 2015, which burned two warehouses to the ground.

RELATED: Site of Brunswick warehouse blaze has history of fires

“They rebuilt,” said reporter Larry Hobbs, a writer for The Brunswick News. “This was state of the art in October 2016.”

Hobbs covered the past fire and the rebuild, saying the new warehouse was built to be safer.

“It was supposed to have interior sprinklers in case something like this happens,” he said. “Also, it’s not made of wood. As you can see, it’s made of aluminum with steel frame.”

Logistec, a publicly traded company based in Canada, has been operating in Brunswick since 1998. Representatives responded to News4Jax’s questions, saying:

They’re bringing outside experts to help in their investigation of the exact cause of the fire.

The company said there are no known consequences to the environment from the fire.

They do plan to meet with the community in the next few days to address any concerns.

Still, Mobley said this neighborhood has had enough.

“We hope we don’t have another warehouse full of pellets after this, that’s what we’re hoping,” he commented, as he tried to figure out how he’d get the resources to man the fire.

Mobley, who has about 40 firefighters on staff, said he will man the fire until it’s out and safe for the community. He said it’s likely they’ll have to remove all the pellets first.

The state fire marshal is investigating the cause of …read more

Saving a life: How to react in an emergency and increase survival rate

14 brands offering freebies for getting a COVID-19 vaccine