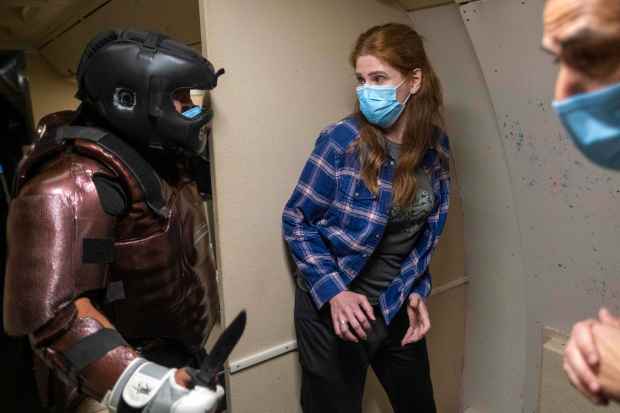 A hijacker wielding a knife, a drunk demanding another drink, a man refusing to put on a mask — flight attendants are getting trained on how to handle such scenarios in these times of increasingly aggressive passengers.

“I’m not putting my mask on! I’m not putting it on!” an air marshal, role-playing, yelled as he pushed into a flight attendant at the back of a plane simulator.

During a recent four-hour course, 20 or so flight attendants and a few pilots picked up punching, eye-gouging and other techniques in a nondescript El Segundo office building, not far from Los Angeles International Airport. The Transportation Security Administration has offered such instruction to flight crew members since 2005. These days, the class is as important as ever — with unruly-passenger incidents having skyrocketed.

According to the Federal Aviation Administration, there were nearly eight unruly-passenger incidents last week per every 10,000 flights. While that number dropped from around 12 incidents per week from the beginning of the year, it’s still more than triple the average at the end of 2020.

That translates to around 4,700 reported cases of unruly passengers so far this year. Not surprisingly, the pandemic is playing into the havoc: Of those, 3,400 were mask-related incidents; passengers must wear masks properly while onboard unless they have a TSA exemption.

“It’s programs like these that we can take the skills our federal air marshals have acquired through a rigorous training program, field (and) practical experience,” said Daniel Babor, TSA’s supervisory air marshal in charge, “and share that with our counterparts in industry to strengthen the overall security.

“They’re on the front lines, working amongst passengers every day,” he added, referring to flight crews. “Lately, we’ve all seen the uptick in passengers becoming disruptive, in a lot of cases becoming violent or assaultive. So the purpose of this course is to give them confidence when they’re faced with any scenario.”

In May, a woman on a Southwest flight from Sacramento to San Diego pushed and punched a flight attendant after refusing to fasten her seat belt and stow away her tray table, a Sacramento Bee story reported. The attendant received four stitches and suffered three chipped teeth, according to court documents.

On a Frontier Airlines flight from Philadelphia to Miami, in August, a drunk passenger assaulted three flight attendants, punching one and grabbing the breasts of two others, authorities told The New York Times, adding that the 22-year-old was taped down to his seat and later arrested.

House returns to stave off default with debt limit vote