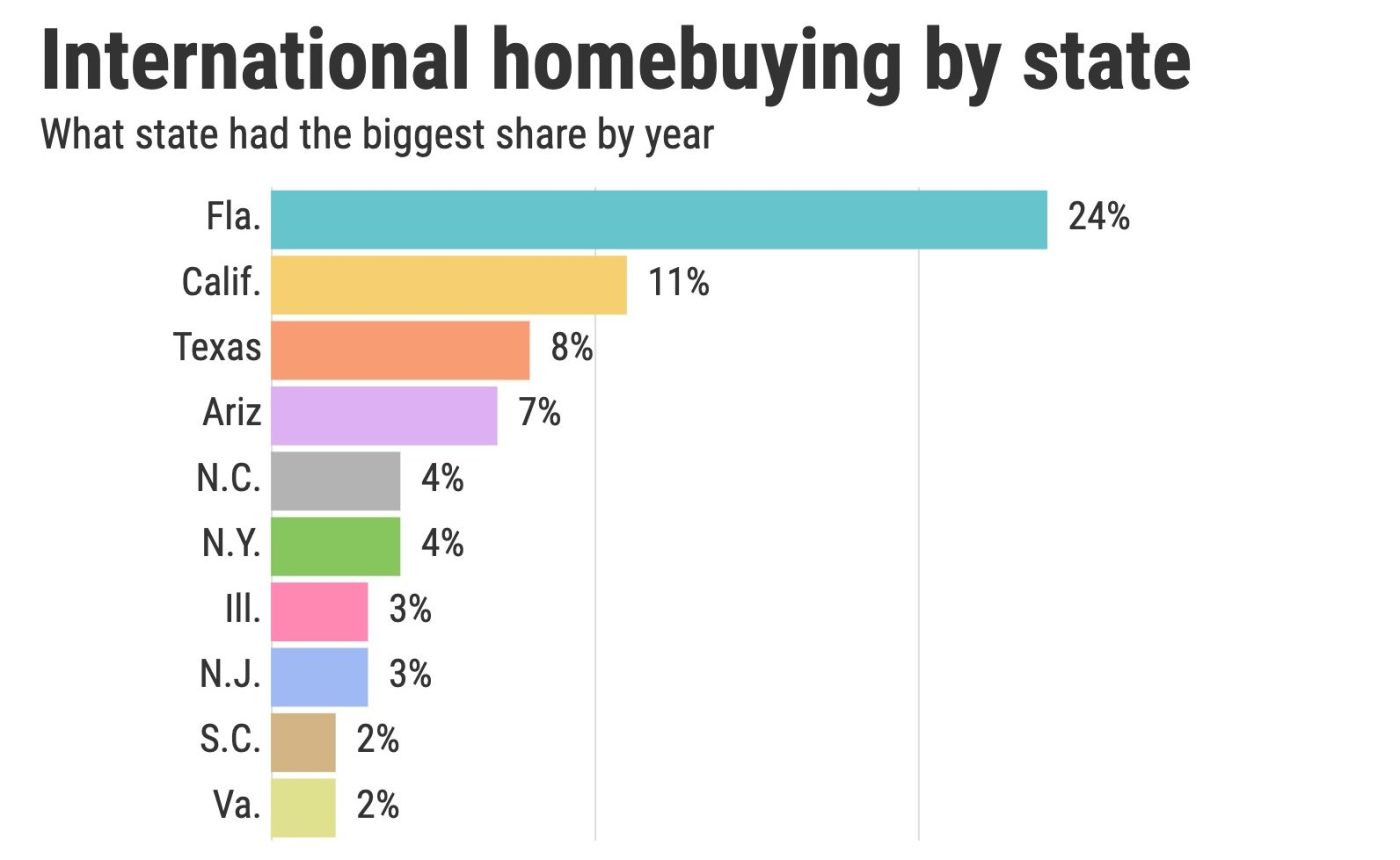 ”Survey says” looks at various rankings and scorecards judging geographic locations while noting these grades are best seen as a mix of artful interpretation and data.

Source: My trusty spreadsheet peeked at the National Association of Realtors’ annual report on international homebuyers — both non-U.S. citizens and recent immigrants. The trade group looked at transactions done by its members that involved existing homes bought by international clients during the 12 months ended March 2022.

Let’s start with the fact that declining international interest in American housing is a nationwide trend.

The past year’s 99,000 U.S. home purchases made by foreigners were down by 8,000 or 7%. It was the lowest transaction count since the trade group started tracking this niche in 2009.

Even with that falling share, the Golden State was No. 2 for foreign purchases in the most recent 12-month period tracked — behind Florida (24% of all buys) and ahead of Texas (8%) and Arizona (7%).

Let’s extrapolate those numbers into some approximate California patterns.

In the 12 months ended in March, roughly 11,000 purchases statewide were made by foreigners, down 6,000 in a year or 35%. That’s a decline five times steeper than the overall national slip.

And two years of such drops in California put the most recent international buying 60% below 2018-20’s annual pace of 27,300 sales.

At the same time, California’s housing market moved in the other direction as a feeding frenzy for residences took off.

Those stats loosely translate to just 2% of the most recent 12 months of California homebuying going to foreign buyers vs. 4% a year earlier or a 6% average in 2018-20.

The largest group of California’s foreign buyers in the 12 months ended in March were from Asia (38%); then Canada (15%) and Latin America (12%). And Asians have sharply pruned U.S. homebuying in the pandemic era — a period filled with tensions over the Chinese original of coronavirus.

In the past two years, the U.S. share of buyers from the People’s Republic of China, Hong Kong, Taiwan and Japan fell to 7% from 14% as purchases from these nations fell by two-thirds to roughly 7,000 homes.

Maybe the drop was strategic. Perhaps foreigners chose not to battle last year’s buying binges in California and across the nation.Related Articles

Where are California’s weakest housing markets?

Mike Trout’s status leads list of Angels questions for 2023; Some answers will be given through the rest of 2022