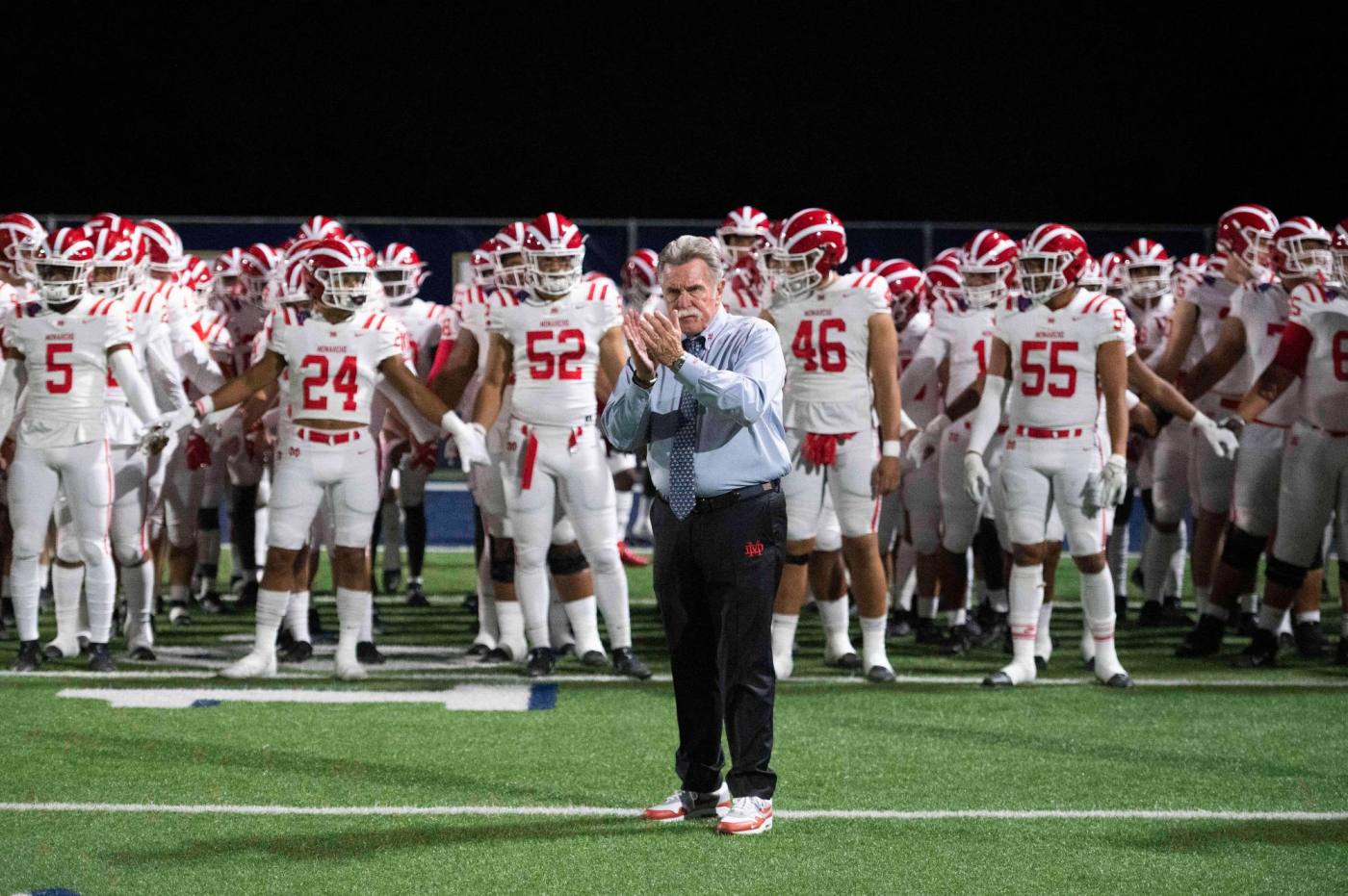 Mater Dei High School head coach Bruce Rollinson stood near a statue of the Virgin Mary in the school’s grotto, a short walk from the football field Thursday morning.

Four Monarchs players had just led parents, alumni and fans in part of a Rosary at the end of a morning that had been both prayerful and profane, part football practice, part pep rally punctuated with talk of the values of the nationally top-ranked football program and a school whose motto is “Hope, Glory, Love.”

Mater Dei was a day away from a CIF Southern Section Division I championship game showdown with Servite and a shot at a third national title in five years. But a game that had sold out within a matter of hours this week will played against the backdrop of growing calls for Rollinson’s and Mater Dei principal Frances Clare’s firings following an Orange County Register report detailing the coach and school’s handling of a violent hazing incident earlier this year.

A current Mater Dei player punched a teammate, 50 pounds lighter than him, three times in the face during a hazing ritual called Bodies on Feb. 4 while other Monarchs players shouted racial epithets at the smaller player, according to two videos of the altercation obtained by the Register.

The Register is not identifying the players because of their ages.

The smaller athlete, Player 1, suffered a traumatic head injury, a broken nose and wounds above each eye, according to medical records. The Santa Ana Police Department recommended the larger player, Player 2, be prosecuted for felony battery, according to a police report. The Orange County District Attorney’s Office does not intend to file charges in the case.

The player’s family filed a lawsuit against Mater Dei High School and the Roman Catholic Diocese of Orange in Orange County Superior Court on Tuesday, Nov. 23.

Monday Morning Lights: What it was like covering Serra vs. St. Francis championship game amid gunshots and sirens

“If I had a hundred dollars for every time these kids played Bodies or Slappies, I’d be a millionaire,” Rollinson told the injured player’s father the day after the altercation, according to a court filing.

But Rollinson said during an April interview with a Santa Ana Police Department investigator that the interview was “the first time he has heard of any of his players participating in the ‘Bodies’ game where participants punch each other until someone quits,” according to a police report.

Now standing in front of a statue of Mary, described only moments earlier by he and his team as “the holy mother of victory,” Rollinson was asked if Bodies and the actions revealed on the Feb. 4 videos measured up to Mater Dei’s values?

“I’m not going to make any comments at this time,” he finally said. “So we’re just going to stand here forever.”

Are you concerned about your job? Rollinson was asked.

Golden Globes 2021: The Complete List of Nominees | Entertainment Weekly
Every day is the holiday in Chicago in new Disney movie ‘Christmas Again’

Get ready to be jolted by the cold Saturday morning