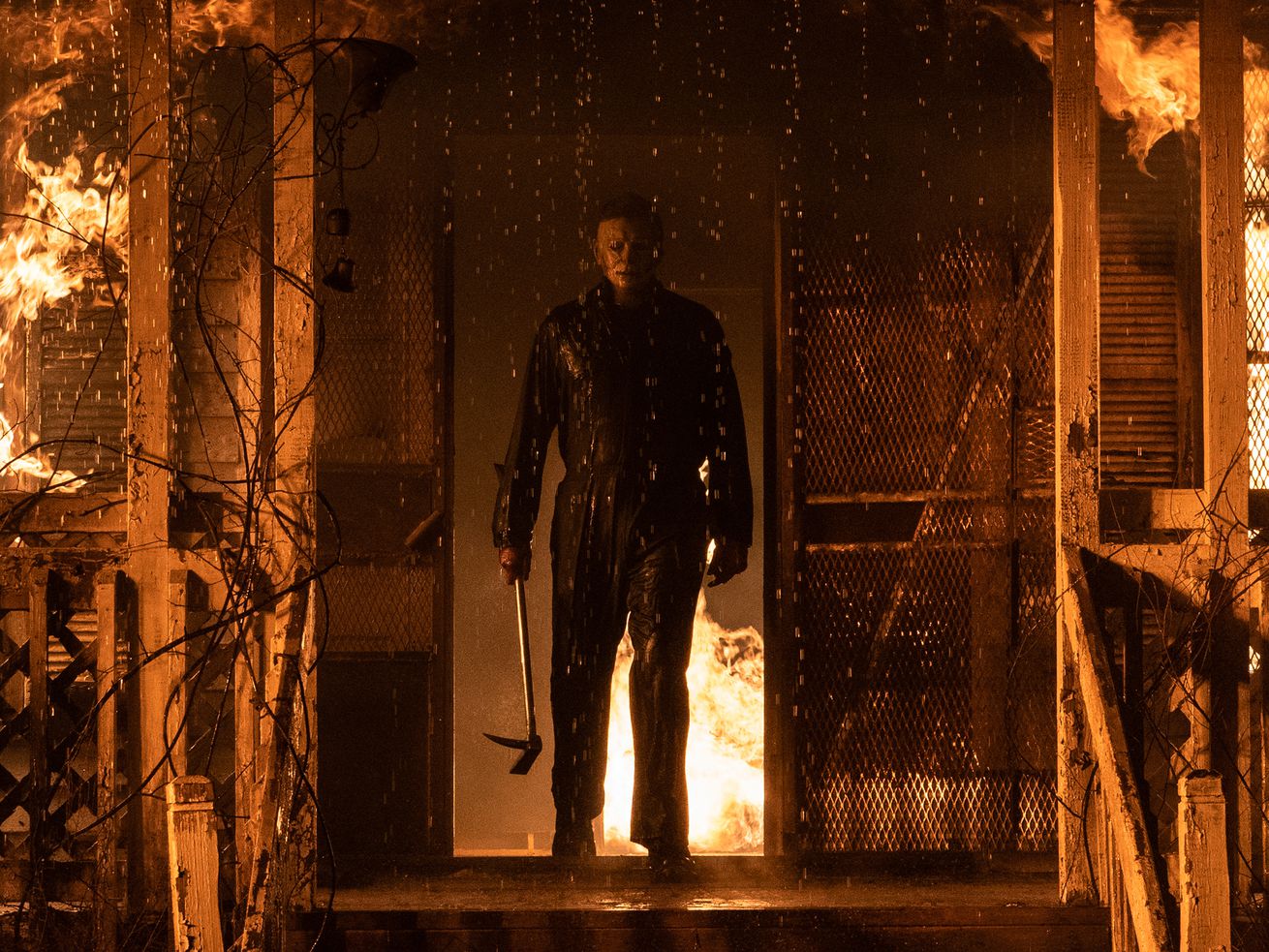 Being trapped in a burning building doesn’t slow down Michael Myers in “Halloween Kills.” | Universal Pictures

Exciting 2018 film lit up the horror franchise, but sloppy sequel snuffs it out.

“Evil dies tonight!” – Wildly optimistic and more than a little naïve chant from the citizens of Haddonfield, Illinois, as they form a mob to go after Michael Myers.

For those of you keeping gore, I mean score, at home, Michael Myers a.k.a. The Shape from the “Halloween” movies will be celebrating his 64th birthday in a few days, but the relentless killer behind the white mask remains in remarkably good shape. I guess a steady appetite for destruction and gruesome kills keeps one slim, trim and grim.

If there’s one thing the good folks of Haddonfield, Illinois, should know by now, it’s that nearly 60 years after 6-year-old Michael murdered his teenage sister Judith, 35 years after Michael went on a killing spree in the late 1970s and just hours after he wasted more than a dozen locals, he has morphed into something otherworldly, something virtually unstoppable, something as powerful as a superhero villain. And yet when a diminutive, portly, escaped mental patient who looks like an unkempt Wallace Shawn wanders into a hospital where an unruly mob has gathered and the poor soul starts wobbling around, the townsfolk think this guy is the evil entity who has wreaked so much carnage, and they start chasing him around as if they’re in a bad “Frankenstein” sequel. Come on, mob!

That’s only one of the head-scratching, unintentionally comedic, ludicrous developments in the thudding disappointment that is “Halloween Kills,” the follow-up to the exciting and clever 2018 reboot/sequel that marked the return of Jamie Lee Curtis and was a direct sequel to the 1978 original. You can throw out “Halloween II” and “Halloween III: Season of the Witch” and “Halloween H20” et al., and consider this the third installment in this particular version of the HCU (Haddonfield Cinematic Universe), with numerous callbacks to the 1978 and 2018 films and a myriad of characters who were children back in the late 1970s and narrowly escaped Michael’s grasp and are now grown-ups who are still haunted and want this embodiment of evil to, you know, die once and for all.

Good luck with that.

“Halloween Kills” picks up in the aftermath of the 2018 film, in which Laurie Strode (Jamie Lee Curtis), her daughter Karen (Judy Greer) and her granddaughter Allyson (Andi Matichak) trapped Michael Myers in a safe room in Laurie’s house and set the place ablaze. As Laurie is rushed to the hospital with a stab wound in her abdomen, she sees firetrucks heading to her home and cries, “Noooooo! Let it burn!” Alas, emergency responders arrive on the scene just in time for Michael to rise from …read more

Golden Globes 2021: The Complete List of Nominees | Entertainment Weekly
Monday Night Football picks and prop bets: What can Derrick Henry do vs. the Bills?

What to know before Stanford takes on Washington State

Could a bank’s $20 million investment add up to better days for South Chicago?