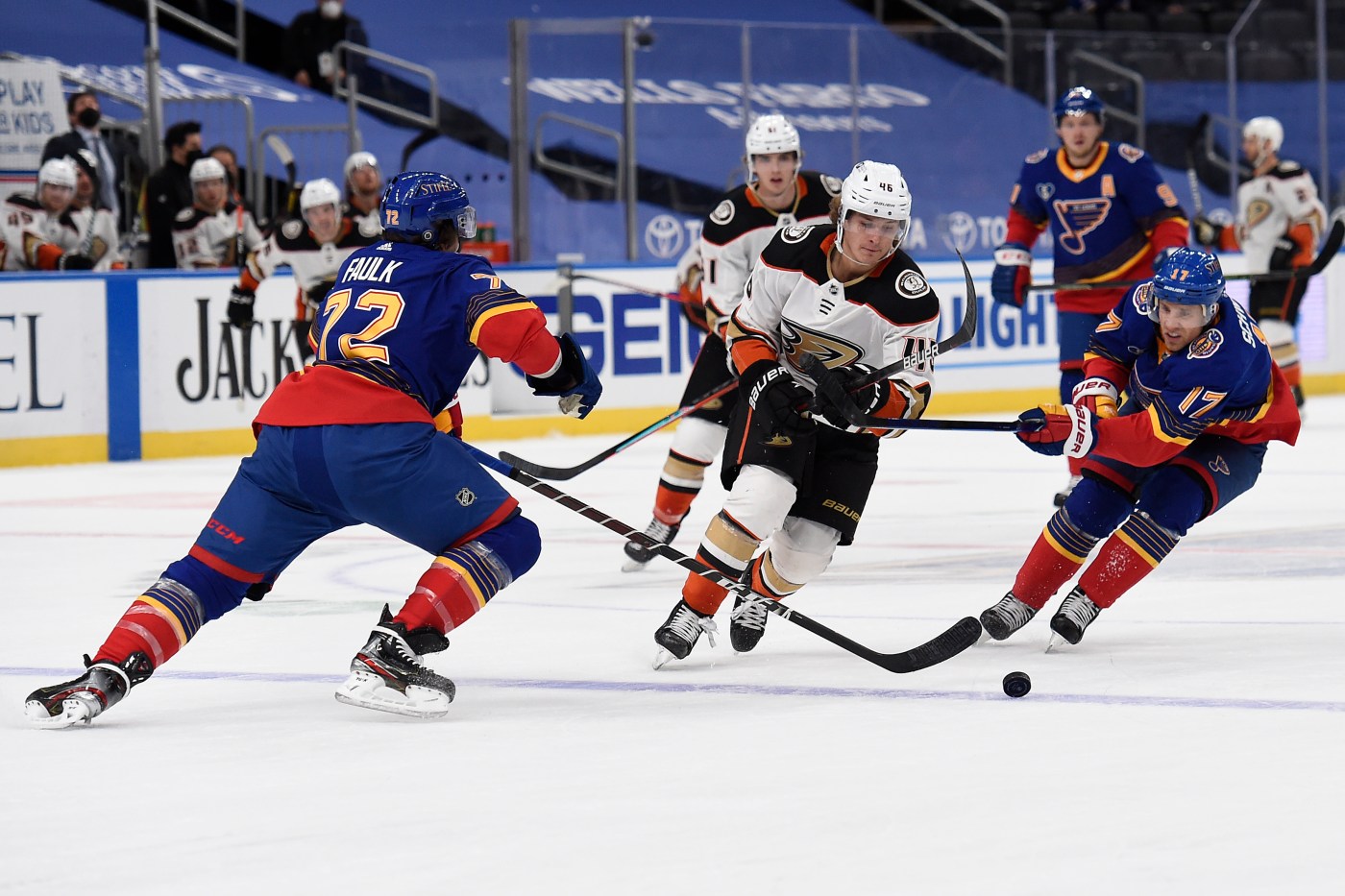 No question, this has been a season of loss for the Ducks, who clinched last place in the West Division with a 3-1 defeat Monday to the St. Louis Blues, but it’s also been a season of discovery for the rebuilding franchise. Some finds have been more significant than others.

Sure, teaming left wing Max Comtois with rookie center Trevor Zegras and right wing Troy Terry seems like a no-brainer now, after four productive games together. Coach Dallas Eakins could have gone in another direction, placing the young players with more veteran linemates.

The Kid Line has been the Ducks’ best line since Zegras, 20, was recalled April 28 from the San Diego Gulls of the AHL and slotted between Comtois, 22, and Terry, 23. In four games, they’ve combined for two goals, four assists, 34 shots on goal and a plus-6 defensive rating.

Best of all for the Ducks, Zegras’ infectious enthusiasm coupled with his wizardry with the puck on his stick have rubbed off on his linemates and everyone else he’s come into contact with since his recall. There are reasons to believe the Ducks have found an elite center and a top line for seasons to come.

“They’ve got some synchronicity going right now, and it’s fun to watch,” Eakins said after the Ducks’ 6-2 rout of the Kings in their home finale Saturday. “I think that’s very contagious, that kind excitement on the ice. We’ll look to build off of it.”

It’s not just about passing, shooting and scoring, though.

Zegras has won 24 of 45 faceoffs (53.3%), mostly while matched up against Anze Kopitar of the Kings and Ryan O’Reilly of the Blues. Kopitar is a two-time Stanley Cup champion and O’Reilly was the Conn Smythe Trophy winner during the Blues’ Cup run in 2019.

The Ducks reassigned Zegras to the Gulls after a 17-game stint in the NHL in which he had one goal and six assists as a left wing. He was sent down to transition back to his natural position as a center, to work on his faceoff efficiency, improve his defensive play and continue his growth.

Lessons have been learned.

“The thing I’ve been really impressed with in the first couple of games here is his responsible play without the puck,” Eakins said. “We know where he’s going to go with it. We’re never going to take that away from him. The thing I was a wee bit worried about was how he was going to play defensively.

“And so far he has done very, very well.”

Asked what makes Zegras a different player as a center, Eakins said:

“When he’s on his left wing, he’s constantly got these boards on his left side that limit his space. This kid can find space and the more space he can find, the more offense he can create. I’ve always equated offense to space. Putting him in the middle gives him a ton of room to make plays or find more space.

“That’s the biggest thing for me.”

The Ducks complete their season with games Wednesday against …read more

The Packers are reportedly looking for a QB amid the Aaron Rodgers drama. Here are 9 options.