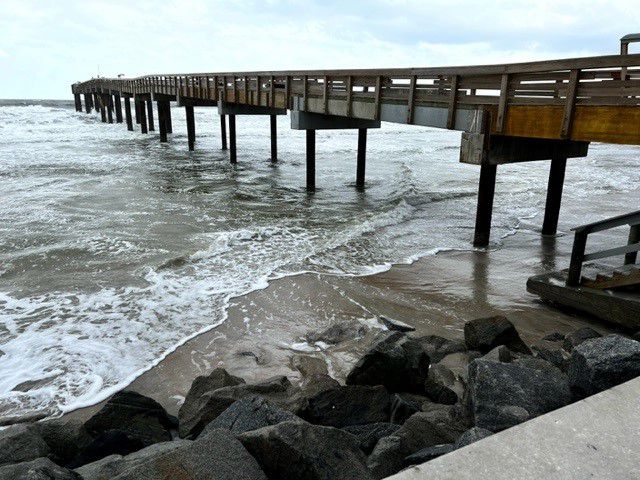 A high surf advisory for Northeast Florida will be in effect until 5 a.m. Saturday, and a high rip current risk will also be in effect through late Saturday night.

It comes as rough waters and gusty winds hit the beaches in St. Johns County on Friday. The Weather Authority forecasts that wave heights could reach six feet Saturday with sustained winds up to 15 mph.

“Anyone who kites looks for conditions like this and we all show up on the beach like a bunch of turkeys — flock to the wind,” he said.

But he and others are also concerned for erosion at the beaches — like Vilano. That’s where we found John McQuade, who was admiring the surf.

“I was hoping the dunes don’t get impacted too much,” he said.

Adam Morley, who owns Genung’s Fish Camp in St Augustine, says he expects to see some erosion from the weekend conditions.

Hurricane Fiona has made its way north, but all eyes remain on the tropics — and a system that has its sights on Florida.

SJC Beaches posted a warning about the rough beach conditions this weekend on Facebook:

“St. Johns County beaches are forecasted to experience unusually high surf and tides, dangerous currents, and strong winds along the coastline Friday through Sunday as a result of nor’easter conditions.

“Residents and visitors are strongly encouraged to exercise extreme caution and avoid ocean swimming during this time.

“Some pedestrian access points may be compromised, and on-beach driving maybe restricted throughout the weekend Sunday. In addition, coastal flooding and erosion may occur on all St. Johns County beaches for the duration of this weather event.”

Golden Globes 2021: The Complete List of Nominees | Entertainment Weekly
A doc from the Disney family takes aim at the Mouse House

Monterey Jazz Fest: Back to normal, but with new wrinkles

Man found shot to death on Ogden Avenue on West Side