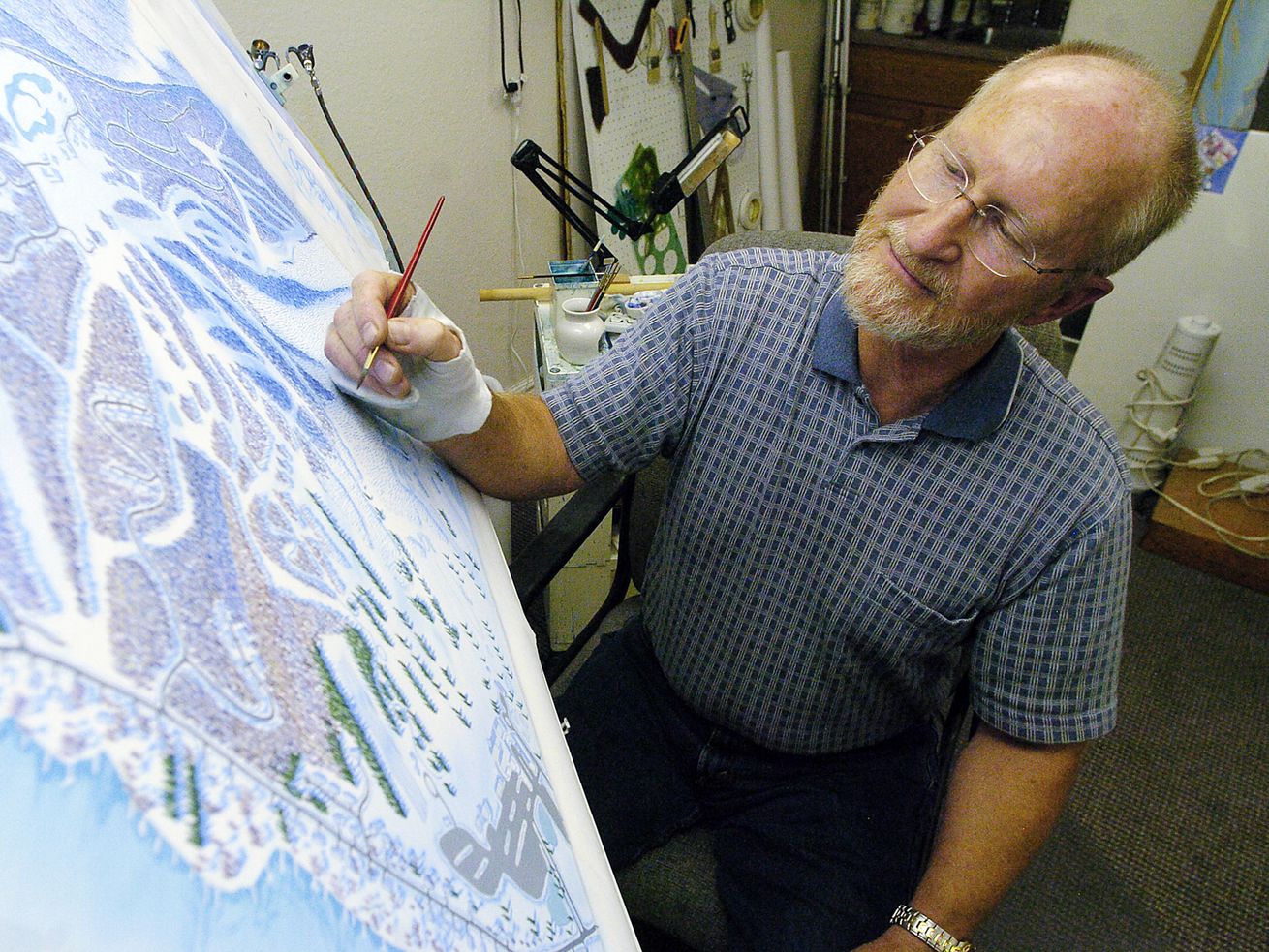 James Niehues works on a ski map of the Wisp Resort in Maryland on Oct. 25, 2007, in Loveland, Colo. | Kirk Speer, The Gazette via AP

James Niehues has painted trail maps for over 200 ski areas

If you’ve ever been skiing or snowboarding, you’ve probably seen James Niehues’ art.

Maybe it helped your family safely navigate down the mountain. Maybe you took it as a souvenir, thumb-tacking it to your bedroom wall, like many young skiers. Maybe you bought his book, “The Man Behind the Maps,” which was released in 2020 to showcase the artist’s illustrious, 35-year career painting the trail map for what seems like every ski resort in America.

Or, maybe you threw his art in the garbage. No worries if you did. It doesn’t bother the 75-year-old Colorado native when he sees a paper trail map donning his painting crumpled in the trash. He loves that his art has utility.

“That means it’s been used, and there couldn’t be a better compliment,” Niehues told the Deseret News.

In October, Niehues retired from painting trail maps. His career spans over 200 ski resorts and countless landscapes throughout four continents — the last job he turned down was for a ski area in New Zealand.

But an artist never really retires, and Niehues is no exception. His next endeavor, the Great American Landscape Project, will feature a broader scope of landscape paintings and sketches. Same style, fewer ski resorts.

In November, the artist released the first of four sets of original paintings and sketches from Utah — including those of Alta, Sundance and the Utah Olympic Park, all available on his website. In the coming weeks, he will release paintings and sketches from Beaver Mountain, Brighton, Deer Valley, Eagle Point, Park City, Solitude, Snowbasin and Snowbird. The proceeds from a painting depicting both Park City and the Cottonwood canyons, one Niehues said was particularly special, will be donated to the National Ability Center.

His paintings go for thousands of dollars. Bids for his original work usually hover just below $5,000 on Ebay, and earlier this year, Niehues sold 10 original maps, a set of custom skis that featured his art and dove into the world of non-fungible tokens, raising over $70,000 for the Colorado Snowsports Museum.

Just a few years ago, if you were to ask Niehues if his paintings could be auctioned for that much, he probably wouldn’t believe you.

“I’ve known for a while that there’s a lot of people out there that do follow me, because I had a small (web) site, you know, and I would get feedback from that. But I never realized just how much until Todd came along,” he said.