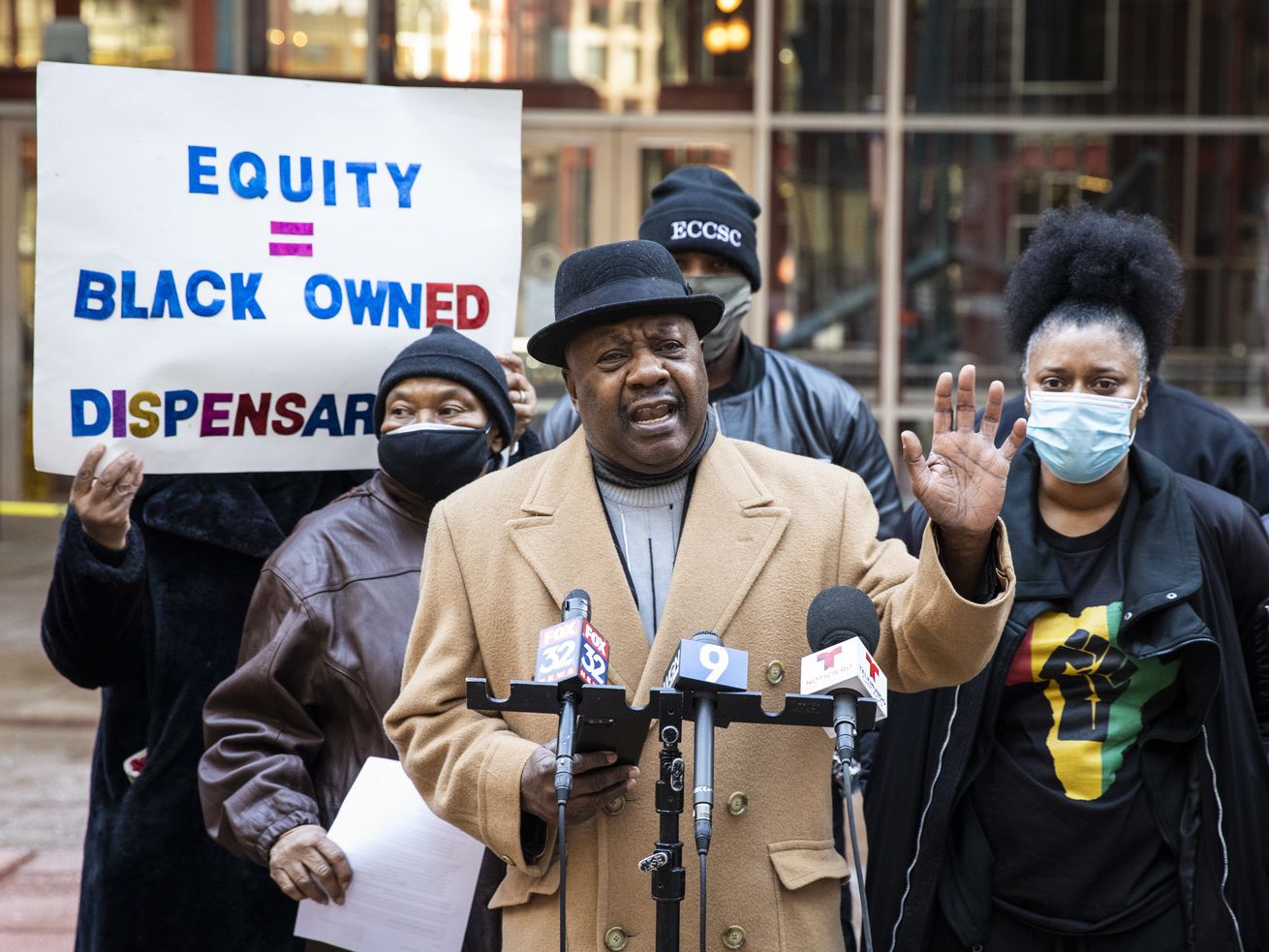 As a group of social equity applicants attempts to draft legislation to create new dispensary licenses, infighting over the details prompted a downtown news conference Tuesday that effectively devolved into a sparring match.

Infighting among a group of minority pot shop applicants drafting legislation to resolve the state’s troubled licensing rollout came to a head Tuesday when a downtown news conference effectively devolved into a sparring match.

The ad hoc coalition of social equity applicants — a designation created to diversify the state’s white-dominated weed industry — has splintered into two factions pushing dueling proposals and battling over specifics.

The two groups want to double the number of new dispensary licenses from 75 to 150. And they agree that a second lottery should be created to issue those additional permits to existing applicants that don’t qualify for the initial, long-delayed lottery. That drawing was held up last year after a series of lawsuits were filed when applicants raised issues with the grading process.

During Tuesday’s news conference in front of the Thompson Center, Rickey Hendon, a former state senator and current dispensary applicant, claimed the faction of social equity applicants he’s leading is “being snowballed by people who are supposed to be activists helping us fix this cannabis regulation mess.”

His plan would limit the number of chances each group gets in the proposed second lottery and do away with a provision he refers to as “the slave master clause,” which allows applicants to earn social equity status simply by promising to hire individuals who qualify.

“This is a business creation program, not a jobs creation program,” said Hendon, who was flanked by fellow applicants, activists and former mayoral candidates Tio Hardiman and Bob Fioretti. “And for any Black group to stand up for the slave master clause, I wish Harriet Tubman would come back, bop them upside the head and carry their Black a— across the Mississippi.”

Ashlee Rezin Garcia/Sun-Times
Edie Moore is a dispensary applicant and the executive director of the Chicago chapter of the National Organization for the Reform of Marijuana Laws.

Edie Moore, the executive director of the influential Chicago chapter of the National Organization of Marijuana Laws, is heading another faction pushing a separate proposal. After Hendon took shots at Moore’s group and its plan, she and another applicant briefly interrupted the news conference to rebut his claims.

Moore’s proposal is backed by her organization, Cannabis Equity Illinois and six minority-led applicant groups, two of which she’s partnered in. All six of those groups have already qualified for the delayed lottery.

After the news conference, Moore said she was “discouraged” that Hendon made a spectacle of their disagreements.

Given that the proposed second lottery would include only existing applicants, Moore believes Hendon is attempting to move the goal posts and she worries …read more

Dog, cat sales at Utah pet stores might be banned unless they are from rescue groups