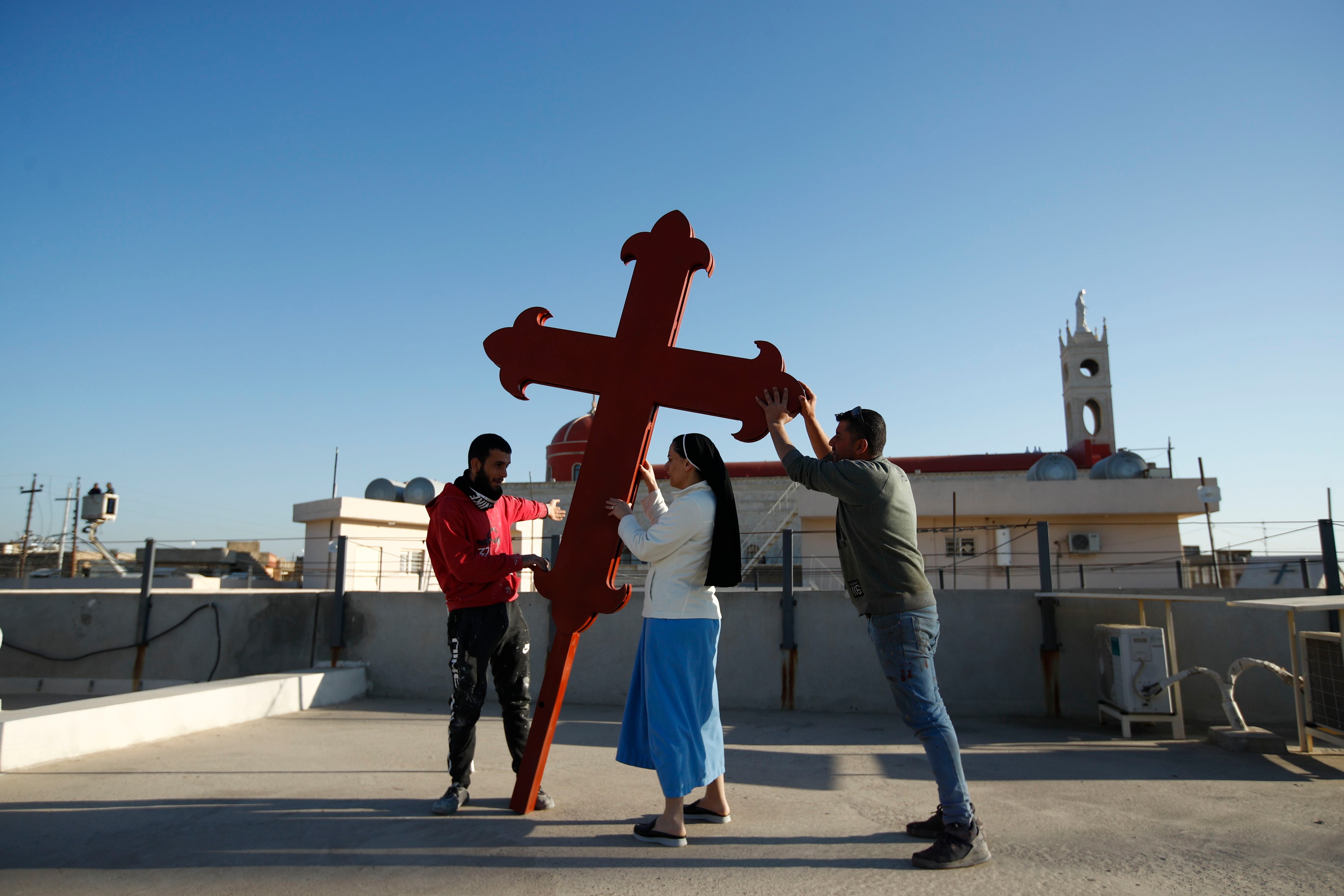 Nasser Banyameen speaks about his hometown of Qaraqosh in the historical heartland of Iraqi Christianity with nostalgia. Before Islamic State group fighters swept through the Nineveh Plains in northern Iraq. Before the militants shattered his sense of peace. Before panicked relatives and neighbors fled, some never to return.

Iraq’s Christian communities in the area were dealt a severe blow when they were scattered by the IS onslaught in 2014, further shrinking the country’s already dwindling Christian population. Many hope their struggle to endure will get a boost from a historic visit by Pope Francis planned in March.

Among the places on his itinerary is Qaraqosh, where this week Vatican and Iraqi flags fluttered from light poles, some adorned with the pope’s image.

Francis’ visit, his first foreign trip since the coronavirus pandemic and the first ever by a pope to Iraq, is a sign that “You’re not alone,” said Monsignor Segundo Tejado Muñoz, the undersecretary of the Vatican’s development office. “There’s someone who is thinking of you, who is with you. And these signs are so important. So important.”

The IS juggernaut and the long war to drive the militants out left ransacked homes and charred or pulverized buildings around the north. But the biggest loss perhaps has been the people. Traditionally Christian towns across the Nineveh Plains virtually emptied out and, by some of the widely varying estimates, fewer than half of the Christians who fled have returned.

The Vatican and the pope have frequently insisted on the need to preserve Iraq’s ancient Christian communities and create the security, economic and social conditions for those who have left to return.

To do that, the Vatican for years has helped coordinate a network of Catholic non-governmental organizations providing help in the field in Iraq and other countries, including in education, health care and reconstruction. The aid is non-denominational — Muslims are helped as well as Christians — and the overall hope is that the delicate interfaith balance can be preserved and strengthened. The pope’s March 5-8 visit will also have a strong interfaith component.

Highlights of the COVID-19 relief bill advancing in Congress

“People want to look for a better future for their families, so you can’t stop them if they have the intention of going somewhere else,” Tejado said. “But at least we try to create the conditions they might return.”

That could be difficult.

Many Christians who fled the IS advance have either stayed in Iraq’s Kurdistan region or started new lives abroad. While those who have returned have been rebuilding fractured but vibrant communities with resolve, some still feel vulnerable and eye better lives elsewhere.

Banyameen returned in 2019 from the Kurdish region to his house in Qaraqosh, also known as Bakhdida. But many family members who fled like him ended up in Australia and Germany. IS sleeper cells still carry out attacks in parts of Iraq, so he worries about the specter of a militant resurgence, the future of his three children and Iraq’s economic and security woes.

“The homeland is the family, not the house … I feel …read more

Golden Globes 2021: The Complete List of Nominees | Entertainment Weekly
What is this mystery building off I-680? And those huge parking lots off I-880? Roadshow

Slaughtering wolves in Wisconsin just for the thrill of the kill