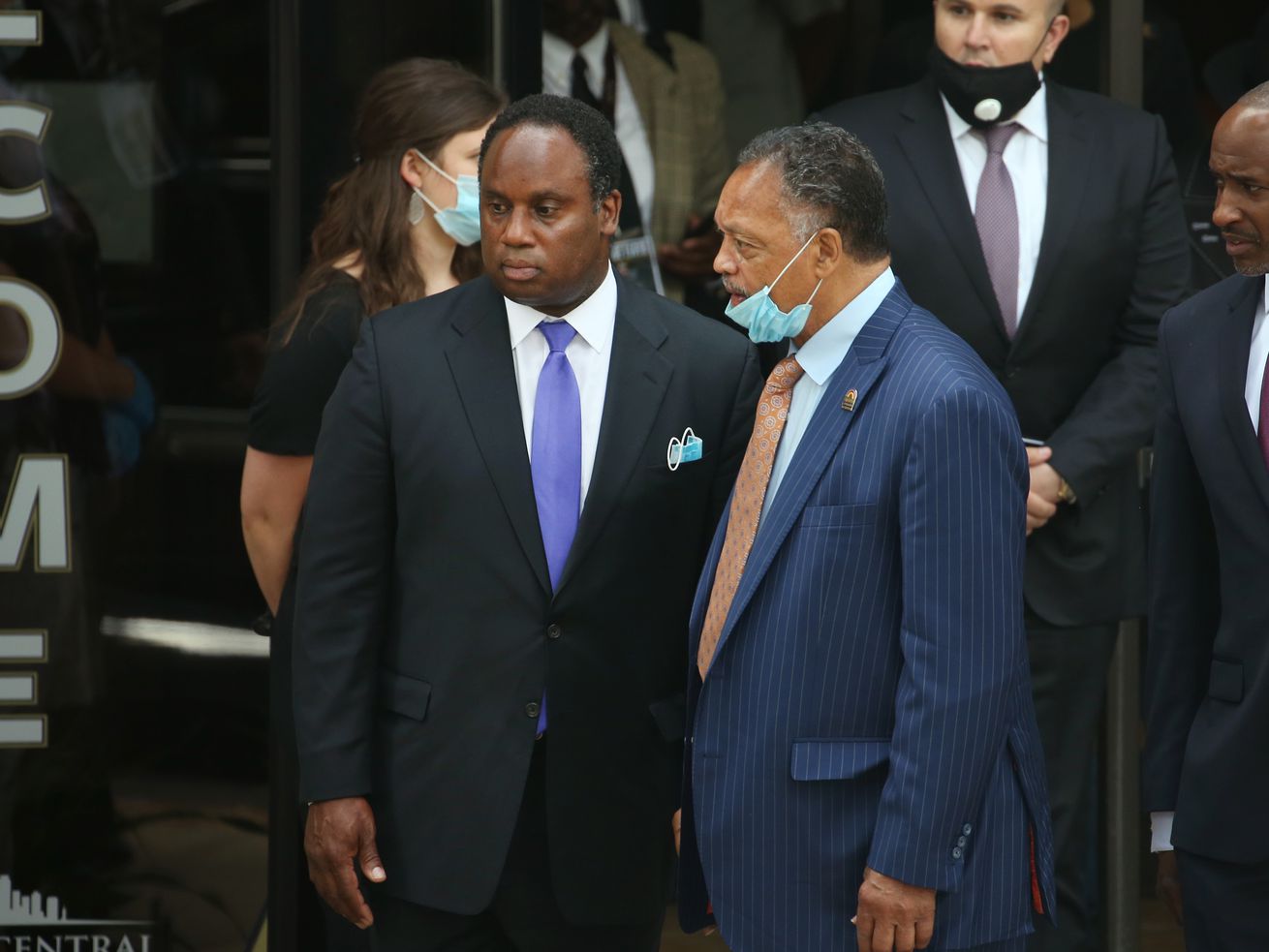 The Rev. Jesse Jackson leaves the Trask Worship Center with his son Jonathan following a memorial service for George Floyd in Minneapolis in June 2020. | Getty Images

Jackson told the Sun-Times if he ran, he would have the support of his father, Rev. Jesse Jackson.

WASHINGTON — More candidates are mulling a Democratic primary run to fill the House seat being vacated by Rep. Bobby Rush,D-Ill., including Jonathan Jackson, who told the Sun-Times on Friday if he ran, it would be with the backing of his father, Rev. Jesse Jackson.

Here are the latest developments:

Jackson, 56, said he was “strongly considering “ a run in the 1st Congressional District primary. Jackson runs a construction contracting company based in Bronzeville and lives in Jackson Park Highlands, in a home across the street from his parents.

“I will think about,” he said of a bid for office.

Jackson said the seed for him to run was planted by the Rev. Al Sharpton — Jackson does a weekly segment on Sharpton’s radio show discussing economic issues of interest to the Black community — and they were discussing Rush’s surprise announcement to not seek a 16th term when the potential of his running came up.

His wife, Marilyn Jackson, is the new CEO of the Muhammad Ali Center in Louisville, Ky. Jackson said they will have a commuting marriage and he will remain in Chicago.

Jackson will decide about a bid in “the next week or two” and said his father “thinks I am well prepared” for a run. He attended Pershing Elementary School through 6th grade; then Le Mans Academy, a military boarding school in Indiana and Whitney Young High School. His undergraduate degree is from North Carolina A&T University, with an MBA from Northwestern’s Kellogg School of Management.

Jackson’s older brother, ex-Rep. Jesse Jackson Jr., resigned his 2nd Congressional District seat in November 2012, under an ethics cloud. Jesse and his now-former wife, one-time Ald. Sandi Jackson, went to prison in the wake of their looting $750,000 from campaign funds between 2005 and 2012 to pay for a lavish lifestyle and a greedy need for expensive things. The couple pleaded guilty in a federal courtroom in Washington on Feb. 20, 2013.

The 1st District is the home of notable Black political figures, including Rev. Jackson, 80, the founder of the Rainbow PUSH Coalition. Rush endorsed Karin Norington-Reaves on Thursday; former Sen. Carol Moseley Braun, D-Ill., the first female Black U.S. senator, is backing Ald. Pat Dowell (3rd). If Jonathan Jackson jumped in the race, he will have the advantage of support from his father, a two-time presidential candidate.

Collins was raised in Englewood. She majored in journalism at Northwestern University and holds degrees from Harvard’s Kennedy School of Government and Divinity School. Her law degree is from Loyola University.

Golden Globes 2021: The Complete List of Nominees | Entertainment Weekly
About a quarter of Los Angeles students absent this week