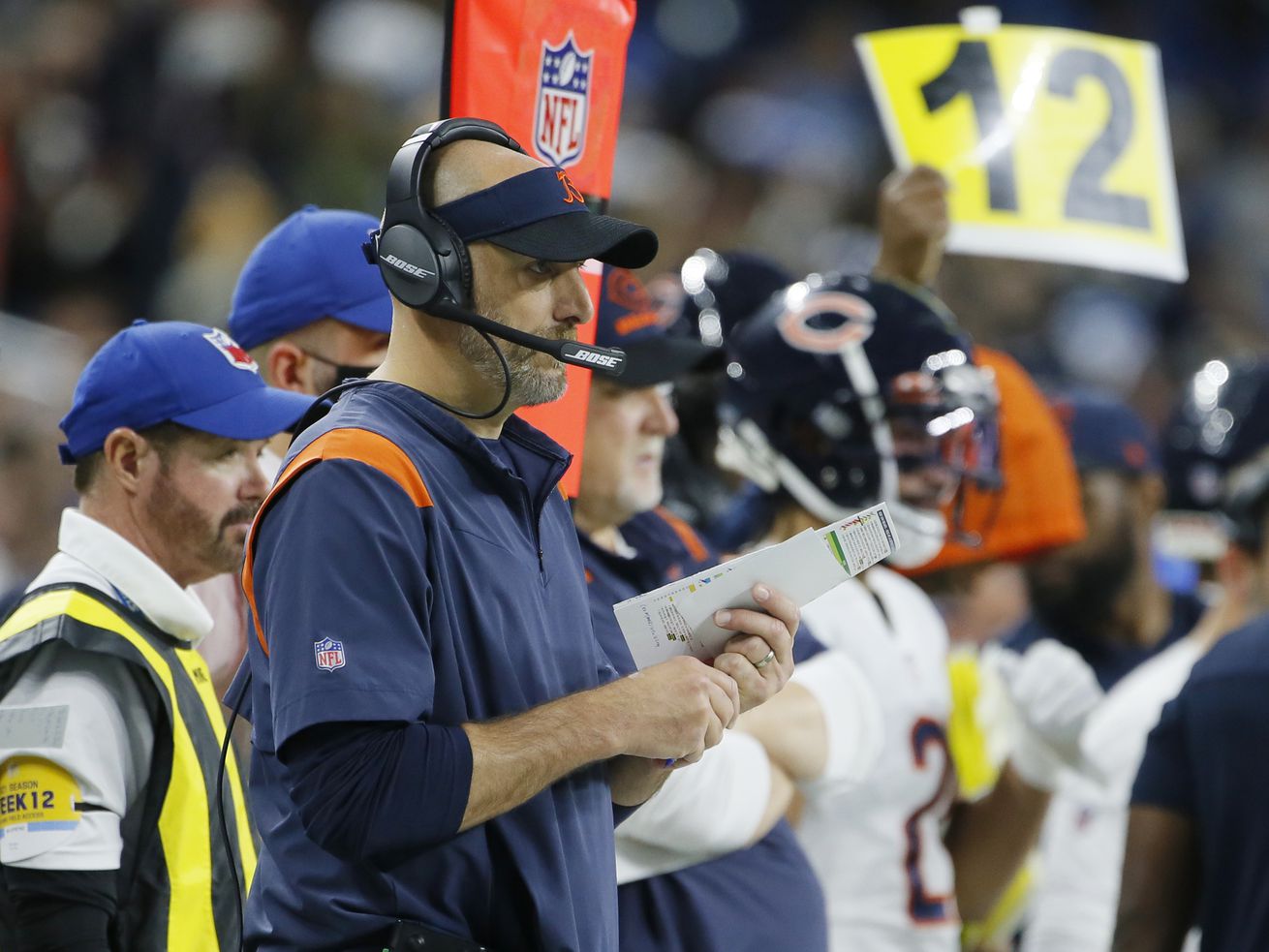 Matt Nagy (left, with headset) said he felt the emotion of his players in a 16-14 victory over the Lions on Thursday at Ford Field. “There was a lot of love and support, which I appreciate,” Nagy said. | Duane Burleson/AP

After a tumultuous week, the Bears’ head coach felt the support of his players in a 16-14 win over the Lions. “They told me they were going to do it and they did it. How cool is that?”

After a tumultuous and chaotic week at Halas Hall, the Bears rallied around their beleaguered head coach Thursday at Ford Field — and barely squeaked by a winless Lions team that at times seemed trying harder to lose than to win.

But Matt Nagy will take it. A win is a win, and Nagy gladly accepted the Bears’ 16-14 victory over the Lions on Cairo Santos’ 28-yard field goal as time expired as a show of support in a time of uncertainty.

“I do, and not just me,” Nagy said. “The other part of this, too, is as Ryan [general manager Ryan Pace] and I do this thing together, they rallied around all of us — not just me, the coaches. In the coaching world, you have assistant coaches, so we’re all part of this thing. And we’re all working together here and I think that’s what’s impressive.”

The shaky victory was unlikely a game-changer for Nagy. But he’s so focused on the moment — to his credit, but also perhaps to a fault — that it doesn’t matter. His team won Thursday. And he wasn’t fired.

“No, it’s just joy,” Nagy said. “The biggest part for me — and I’m not built this way about being selfish — this is about the team. This is selfless for them. Those guys are the ones out there practicing every single day to fight like hell to get a win.

“It’s hard. You either win or you lose in this league. We had two close ones the last two weeks. It’s a big difference if you win those. We didn’t. But we won today. You can’t take that away from those guys. There’s a joy in that locker room. They’re going to have a great Thanksgiving today because they earned it and they fought like hell. They told me they were gonna do it and they did it. How cool is that?”

That was the gist of the players’ message, anyway, when quarterback Andy Dalton, linebacker Roquan Smith and other leaders spoke at a team meeting Wednesday.

“It’s something that we’ll probably just keep to the team,” Dalton said. “Matt wanted me to say something. And I did. And I just spoke from the heart.”

Tight end Cole Kmet said the idea was to win for Nagy. But overcoming the distractions of the erroneous report that Nagy had been told Thursday would be his last game as head coach — and the firestorm that followed — was the biggest tribute to the respect …read more

How to avoid hazardous mix-ups with lookalike poisons