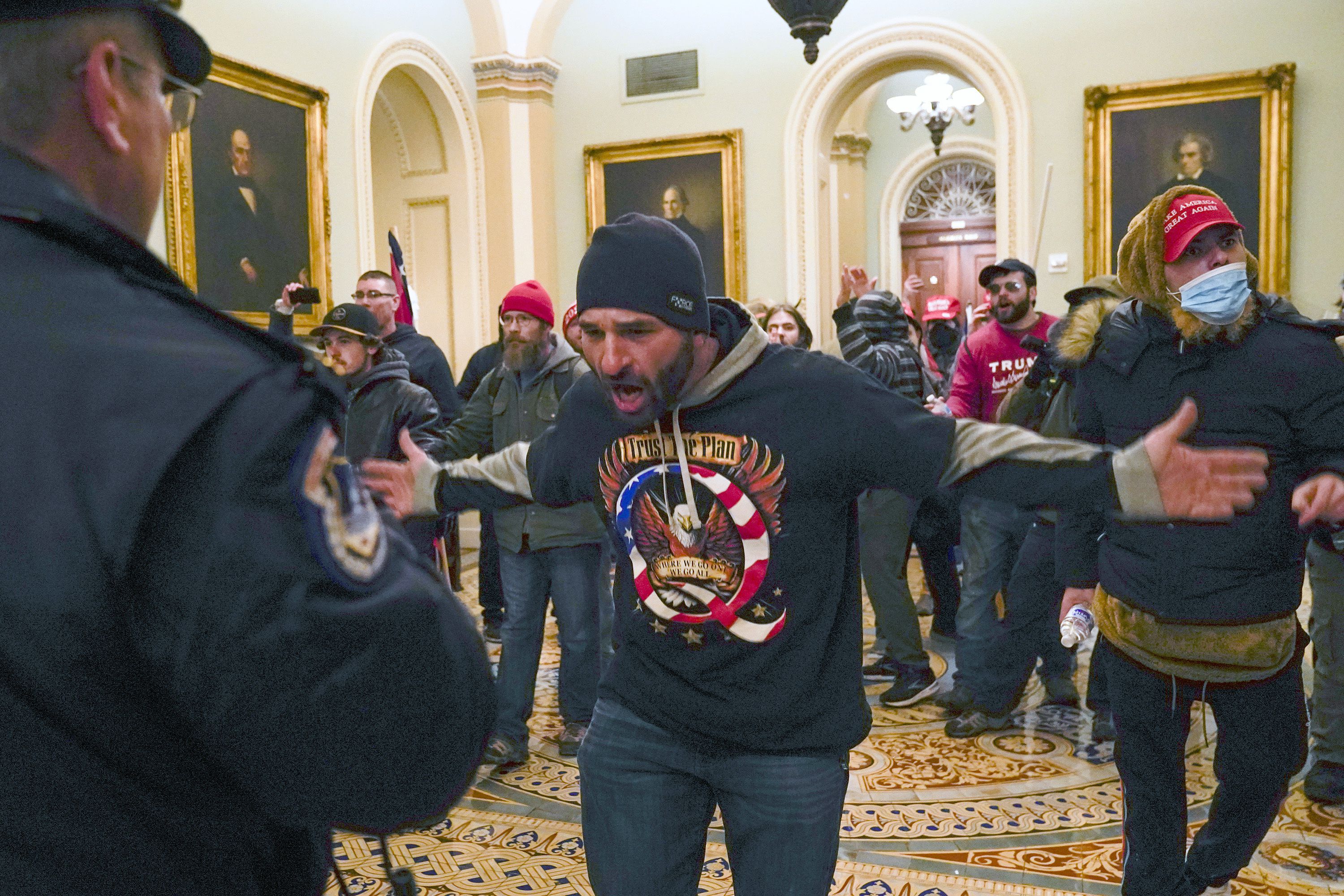 An Iowa man was “weaponizing” rioters who joined him in chasing a police officer up a staircase during one of the most harrowing scenes from a mob’s attack on the U.S. Capitol, a prosecutor told jurors on Friday at the close of the man’s trial.

Douglas Jensen had a folding knife in his pocket and was wearing a T-shirt expressing his adherence to the QAnon conspiracy theory when he joined the rioters who stormed the Capitol on Jan. 6, 2021. One of the videos that went viral after the siege captured Jensen at the front of the crowd that followed Capitol Police Officer Eugene Goodman up the stairs.

“The defendant wasn’t just leading the mob. He was weaponizing it,” Assistant U.S. Attorney Hava Mirell said during closing arguments for Jensen’s trial. “He knew he had the numbers, and he was willing to use them.”

Jurors began deliberating in the case against Jensen, a construction worker who is among hundreds of people charged with federal crimes for their conduct at the Capitol on Jan. 6. Jensen’s shirt — which depicted a large “Q” and a bald eagle along with two QAnon slogans — made him stand out from the crowd of rioters.

Defense attorney Christopher Davis said the shirt was a symbol of Jensen’s adherence to QAnon, which centered on the baseless belief that former President Donald Trump was secretly fighting a Satan-worshipping cabal of “deep state” enemies, prominent Democrats and Hollywood elites. During Trump’s time in the White House, QAnon spread beyond the internet’s fringes to influence mainstream Republican circles.

Angler on 'kind of a date' lands pending record catfish

Jensen believed the conspiracy theory’s apocalyptic prophesy that “The Storm” was coming and would usher in mass arrests and executions of Trump’s foes, including Vice President Mike Pence. Before the riot, Trump and his allies spread the false narrative that Pence somehow could have overturned the results of the 2020 election.

After scaling the outer walls of the Capitol, Jensen climbed through a broken window to enter the building. Prosecutors said Jensen learned from a friend’s text message that Pence was about to certify the election results.

“That’s all about to change,” Jensen replied.

Pence was presiding over the Senate on Jan. 6 as a joint session of Congress was convened to certify President Joe Biden’s 2020 electoral victory. Photographs showed Jensen with his arms extended as he confronted a line of police officers near the Senate chambers.

“Go arrest the vice president,” Jensen told one of the officers, according to prosecutors.

“This was a terribly confused man on Jan. 6,” Davis said of his client.

The defense lawyer urged jurors to judge Jensen by his own actions and not by what others did at the Capitol.

“Jan. 6 is not sitting at that table. Douglas Jensen is,” Davis said, pointing to his client.

Jensen didn’t testify at his trial, which started Tuesday. Goodman was a key witness for prosecutors.

Before running upstairs, Goodman approached Jensen and other rioters with his …read more