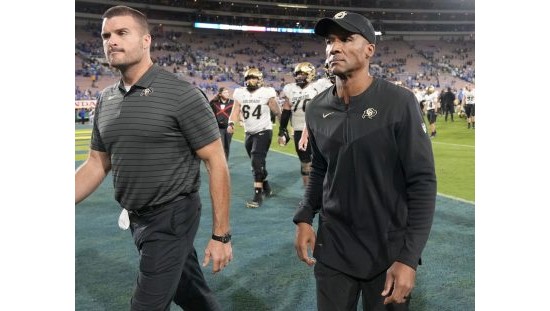 Karl Dorrell has memories as a player and a coach with UCLA, but a trip down memory lane doesn’t appear to be on the agenda for him this week as coach of the Colorado Buffaloes.

The Buffaloes came up winless in nonconference play and Buffs fans are grumbling for a change going into Saturday’s Pac-12 opener against the Bruins in Boulder, Colorado.

Dorrell preached a sense of urgency and improvement during his weekly press conference Monday, a day after Colorado athletic director Rick George released a statement addressed to “Buffalo Supporters.”

George stated that he can “recognize and understand” the fans’ disappointment and frustrations but never mentioned a change in direction away from Dorrell.

Dorrell has mentioned a number of different areas that can help steer the program in the right direction and help earn another victory over his alma mater.

Making sense of the team’s quarterback situation is probably among the highest priorities. The Buffaloes (0-3) used three quarterbacks, including sophomores J.T. Strout and Brendon Lewis, in their last outing against Minnesota.

Strout and Lewis were with the Buffaloes last season but there’s some talk of freshman Owen McCown potentially starting this week.

“I thought he came in when (Minnesota’s) backups were in and played well,” Dorrell said of McCown. “I was really encouraged by that. We are going to turn over every stone about this quarterback position in trying to figure out what’s best for us moving forward.”

UCLA coach Chip Kelly and the Bruins (3-0) are already familiar with Lewis, who was sacked three times in the Bruins’ 44-20 victory in November at the Rose Bowl.

The uncertainty at the quarterback position could work in the Buffaloes’ favor, as Kelly made note of all three having played last week and preparing a plan for each quarterback.

Since 2015, the home team has won each game in the series between the Bruins and Buffaloes.

In Dorrell’s Colorado coaching debut to kick off the pandemic-shortened 2020 season, the Buffaloes earned a 48-42 victory over the Bruins . After a 4-2 season, Dorrell was named the conference’s coach of the year.

If Dorrell is unable to produce a result similar to 2020 against the Bruins, it could lead to his last season in Colorado.

Dorrell has in fact been through this before while leading the Bruins for five seasons. In 2007, the Bruins finished 6-6 overall and 5-4 in the conference before he was fired by then-athletic director Dan Guerrero. The former Bruins receiver finished his Westwood coaching tenure with a 35-27 overall record and …read more

Golden Globes 2021: The Complete List of Nominees | Entertainment Weekly
Bulls set to begin training camp with the gang all together again

A porthole is legal if you have 2 sideview mirrors

1 dead, another wounded in Aurora shooting