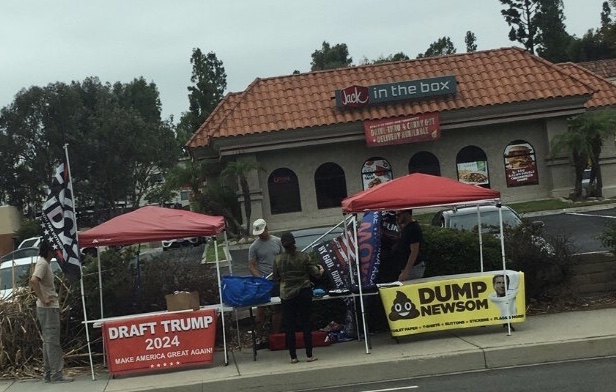 Several times in the last month, Diamond Bar resident Lauren James has noticed a pro-Donald Trump sidewalk vendor on Diamond Bar Boulevard selling banners with the words “F Biden” — except with the F-bomb fully spelled out — and finds the display troubling.

Another reads “F— your feelings.”

“What upsets me most is the discourse it’s trying to ignite,” James said. “This is a family-friendly community. We get along great, and the underlying discourse, to me, is symbolizing the events we saw on Jan. 6 and the events we see happening around the country right now. And I don’t feel safe.”

The flags are likely visible to children. Lorbeer Middle School is on Diamond Bar Boulevard, not far from one of the vendor spots.

The makeshift kiosks are the product of David Brown, a Los Angeles businessman who has been erecting these pop-ups all over Southern California throughout the past year-plus. Brown, operating under the umbrella of Brown & Associates, started in San Diego County and has placed stands in such Orange County cities as Brea, Yorba Linda and Mission Viejo.

In a phone interview, Brown said he doesn’t hate anyone, he’s just being a savvy businessman.

On his way to expanding his business even further, Brown opened a stand in San Marino on Thursday and expects to open another in Monrovia soon. The San Marino stand — on San Gabriel Boulevard and Huntington Drive across from Trader Joe’s — was not flying expletive-laden flags but did have socks with similar sentiments toward President Joe Biden available on a merchandise table.

A pro-Trump merchandise stand along Diamond Bar Blvd. in Diamond Bar flies a banner with the words F Biden, with the F-word fully spelled out. (Photo courtesy of Lauren James)

It might be difficult to tell, but one of these banners flying Friday on Diamond Bar Blvd. in Diamond Bar says F your feelings with the F-word fully spelled out. These pro-Donald Trump and anti-Joe Biden stands are owned by businessman David Brown of Los Angeles and are popping up all over Southern California. (Photo courtesy of Lauren James)

This pro-Donald Trump souvenir stand on San Gabriel Boulevard and Huntington Drive in San Marino is one of many pop-ups owned by David Brown. The stands are appearing all over Southern California, beginning in San Diego County about a year ago. Many of the stands, but not all, fly flags with vulgar messages directed at President Joe Biden, prompting complaints from residents. (Photo by Penny Rosenberg, Pasadena Star-News/SCNG)

Brown’s stands have also been in Chino Hills, prompting residents to call local law enforcement, according to the Chino Champion.

Brown, a former St. Louis lawyer living in Los Angeles, said he has set up shop in more than 30 cities so far.

But the First Amendment gives Brown the freedom to express his opinions, no matter how colorfully, Diamond Bar assistant City Manager Ryan McLean said via email.

“The city prides itself on fostering a family-friendly, inclusive community through the …read more

The Bears are worth billions. Can we expect some success?