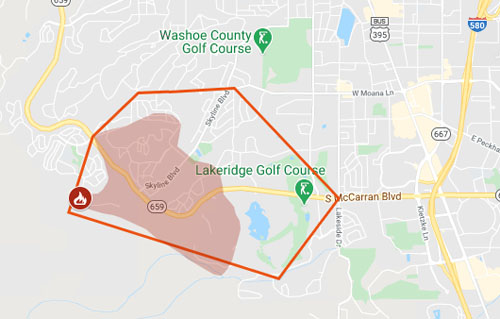 RENO, Nev. (AP) — A fast-moving wildfire driven by strong winds destroyed or damaged about 12 homes and buildings in a Reno neighborhood and forced the evacuation of hundreds more on the edge of the Sierra Nevada foothills, authorities said.

It was one of several blazes burning near the Nevada-California border.

As many as 500 homes were threatened by the blaze that grew to more than two square miles within hours of igniting around 1 p.m. in brush above the Caughlin Ranch neighborhood, Reno Fire Chief David Cochran said late Tuesday.

The Reno Gazette Journal reported that one of its photographers saw at least five homes burn.

There were no immediate reports of injuries, and the cause of the fire was under investigation.

The map above shows the rough perimeter of the fire as of Tuesday afternoon (in red) and the area of recommended evacuation (orange line).

Mayor Hillary Schieve signed a local emergency declaration and urged residents to stay out of the area. Police Chief Jason Soto said he was increasing patrols in evacuated neighborhoods to help protect homes and businesses.

Authorities cut power to about 7,000 customers as a precaution, and several roads were closed. Classes were canceled Wednesday at Caughlin Ranch Elementary School, Swope Middle School and Reno High School.

Police assisted with evacuations, and the Red Cross set up an emergency shelter at the Washoe County senior center.

Meanwhile, crews north of Reno battled a brush fire that broke out along the California-Nevada line and has forced the closure of State Highway 70 near Vinton and Chilcoot, California. Authorities said some buildings were threatened.

Another fire about 100 miles to the south exploded in size after breaking out around noon Tuesday in California’s Mono County near the Nevada border. Evacuation orders were issued for the tiny mountain community of Walker and other nearby towns as wind-whipped flames churned through trees and dry brush.

The wind was blowing in ahead of a Sierra storm that the National Weather Service said would be more powerful than one that carried winds gusting in excess of 100 mph two weeks ago.