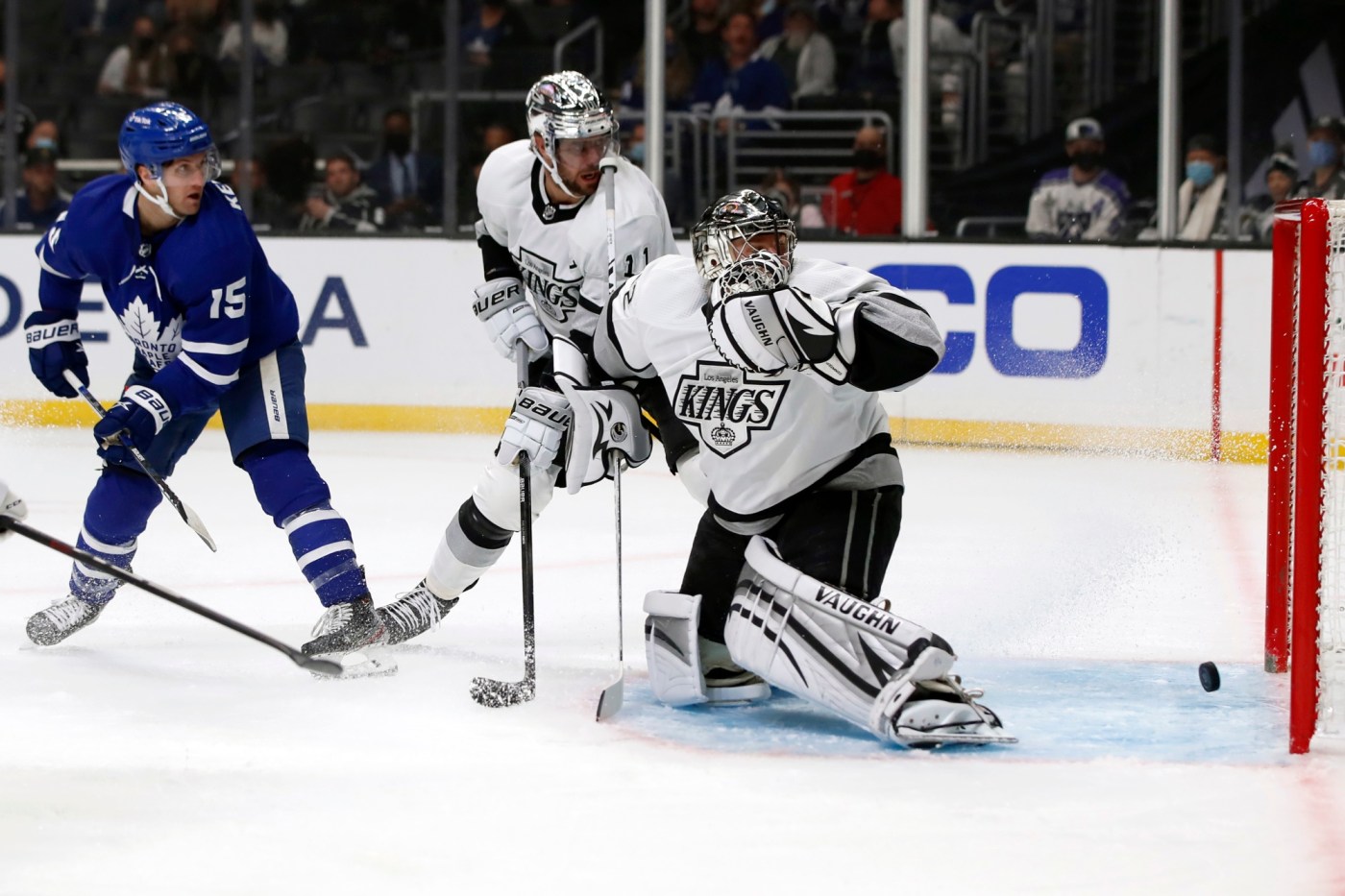 LOS ANGELES — Home has been anything but sweet for the Kings lately as they passed the midpoint of their seven-game stint at Staples Center with an 0-3-1 record after falling to the Toronto Maple Leafs, 6-2, on Wednesday night.

The Kings are now winless in their last five games, while Toronto has won 12 of its last 14.

Winger Viktor Arvidsson had a goal and an assist for the Kings, as did defenseman Sean Durzi in his NHL debut. Jonathan Quick allowed six goals on 38 shots. Quick had been sizzling in his last six starts and the Kings beat the Leafs, 5-1, in Toronto on Nov. 8, but those trends both reversed on Wednesday despite some spectacular saves.

“One team skated like they were on top of the ice and smooth and fast, and the other team just sloshed through the slush, if you will,” Kings coach Todd McLellan said. “We were slow. When we were quick to make decisions we had poor execution. We weren’t together and it just was not a good night against a real good hockey team.”

Former Kings goalie Jack Campbell stopped 30 shots to earn his ninth victory in his last 11 decisions, and he has allowed two goals or fewer in 10 of those 11 appearances.

The third period was largely academic, but the Leafs tacked on another goal early for good measure. Quick made an athletic, lunging stick save on Sandin, but Bunting followed up with a sweep attempt that went in off the skate of Kings center Phillip Danault.

Durzi would add a power-play goal, his first career goal, with 3:53 to play. His rising wrist shot from between the circles went in, but he let his family do the celebrating in the stands. Durzi grew up near Toronto in Mississauga, Ontario, and he was drafted by the Maple Leafs.

“It was nice. Obviously, you know, it was garbage time in the hockey game but to get it out of the way was good. I thought there was a lot to clean up, but it was a really good feeling,” Durzi said.

For the Kings, the second period started auspiciously but unraveled rapidly.

On a night when four former Kings were skating for the opposition, it was the newest King knotting the score 81 seconds into the middle period. Carrying a power play over from the first period, the Kings moved the puck high to Durzi, who loaded up a shot from the right point that Arvidsson deflected in for the equalizer. It was Arvidsson’s first goal since Oct. 30 and the Kings’ first power-play goal in five games.