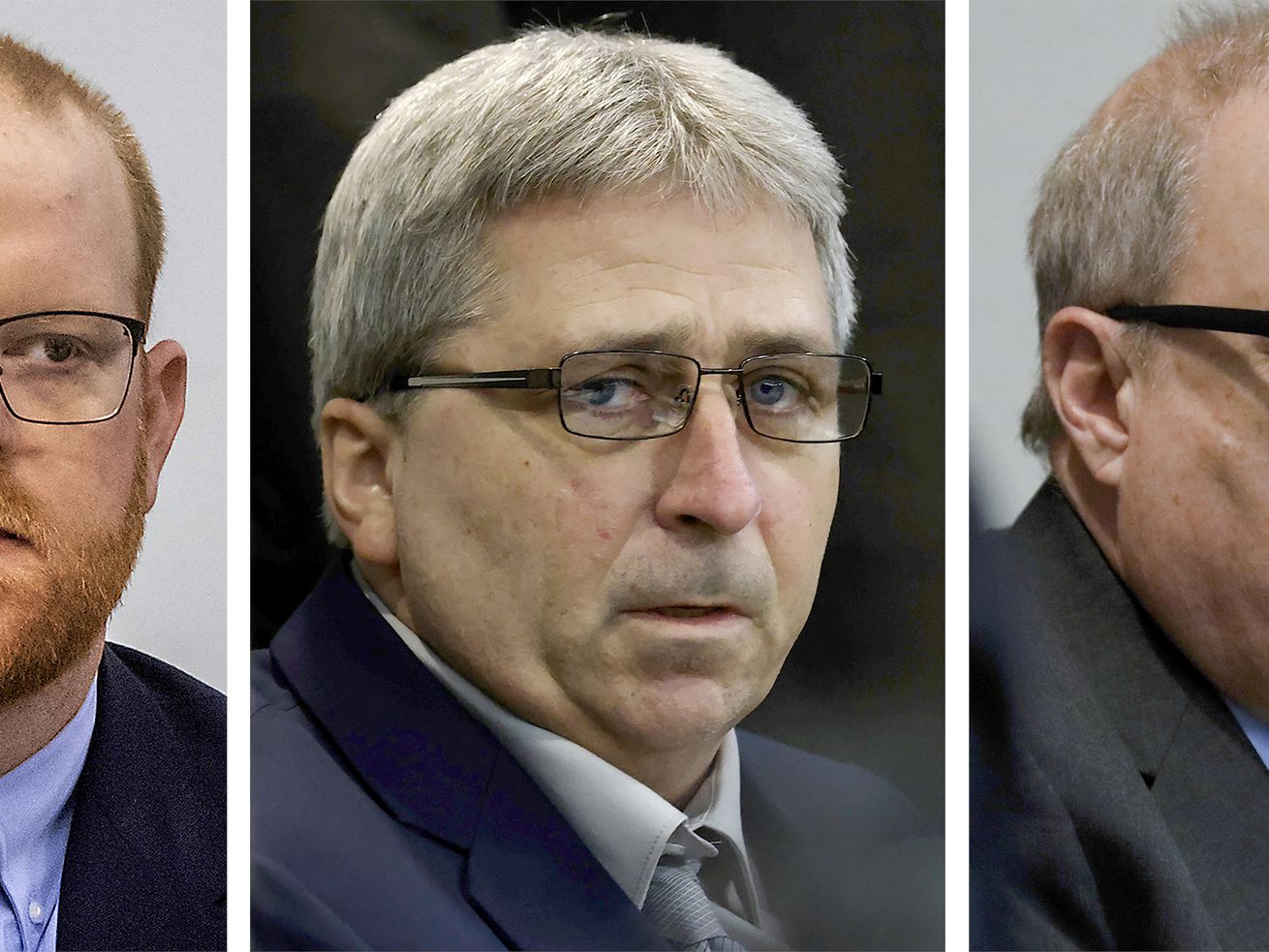 Travis McMichael (from left), William “Roddie” Bryan and Gregory McMichael during their trial at at the Glynn County Courthouse in Brunswick, Ga. Jurors on Wednesday convicted all three in the death of Ahmaud Arbery, the Black man they chased and fatally shot while he was running through their neighborhood. | Associated Press

One defendant told police Arbery ”was trapped like a rat” and that he told Arbery: “Stop, or I’ll blow your f—ing head off!”  Such statements allowed prosecutors to give context to the short video that didn’t show the entire shooting.

The video of Ahmaud Arbery’s shotgun death was a shocking piece of evidence that suddenly brought the Black man’s killing into the national consciousness.

But the murder convictions of the three white men who chased him may have been secured by their own words to investigators the day of the shooting.

Greg McMichael, who was in the bed of a pickup truck when his son killed Arbery, told police the Black man ”was trapped like a rat” and also that he had told Arbery: “Stop, or I’ll blow your f—ing head off!”

Statements like that allowed prosecutors to give context to the short video that didn’t show the entire shooting and had little of the five minutes that the men chased Arbery.

“It’s those statements that screwed the defense more than the video. If they had never talked to police and they said we saw him taking something from the property and running — there’s an OK shot the jury might have acquitted them,” said appellate attorney Andrew Fleischman, who followed the trial from Atlanta.

The shooter, Travis McMichael, his dad, Greg McMichael and neighbor William “Roddie” Bryan all spoke extensively and candidly with Glynn County investigators just hours after Arbery was killed in their Brunswick, Georgia, neighborhood in February 2020.

Big flotilla of illegal gold miners splits up in Brazil

They told police they weren’t sure exactly what Arbery had done wrong, which would later be a big blow to their defense that they were making a citizen’s arrest.

The citizen’s arrest law, repealed by lawmakers after Arbery’s death, requires a person must see or have immediate knowledge of a crime being committed or have reasonable suspicion that someone is fleeing a felony in order to justify a citizen’s arrest.

Sarah Blake Morgan/Associated Press
A mural of Ahmaud Arbery is on display in Brunswick, Ga., where the 25-year-old man was shot and killed in February 2020.

“I don’t think the guy has actually stolen anything out of there, or if he did it was early in the process. But he keeps going back over and over again to this damn house,” Greg McMichael said, according to a transcript of the interview that Glynn County police Sgt. Roderic Nohilly read in court.

Bryan was on his front porch when he saw Arbery run past with the McMichaels’ truck close behind. He told police he didn’t recognize any of them, or know what prompted the chase, but still joined in after calling out: “Y’all got him?”

In an interview with the Georgia …read more

Watch This Insane Mercedes X-Class 6-Wheeler Own The Outdoors