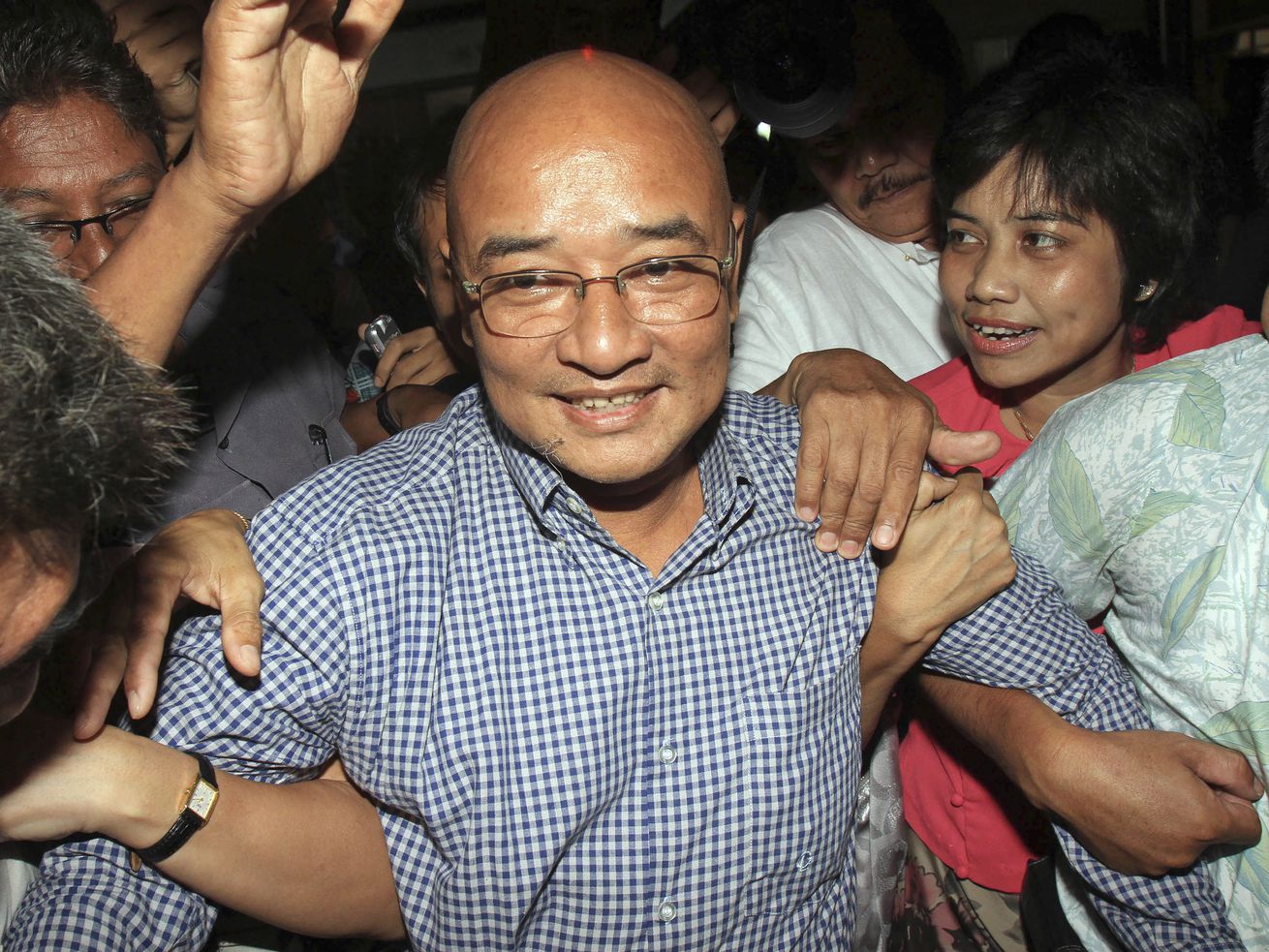 In this Oct. 12, 2011, file photo, Myanmar’s comedian and activist Zarganar, who was serving a 35-year sentence in Myitkyina prison in northernmost Kachin State, arrives at Yangon International Airport in Yangon, Myanmar, after he was released early on Wednesday, Oct. 12, 2011. The authorities in Myanmar on Tuesday, April 6, 2021, arrested Zarganar at his home in Yangon as they continue to crackdown on protests against February’s military takeover and the people they accuse of inciting them. | AP

The comedian Zarganar was taken from his home in Yangon by police and soldiers who arrived in two army vehicles, fellow comedian Ngepyawkyaw said on his own Facebook page.

YANGON, Myanmar — Authorities in Myanmar arrested the country’s best-known comedian on Tuesday as they continue to crack down on people they accuse of helping incite nationwide protests against February’s military coup.

The comedian Zarganar was taken from his home in Yangon by police and soldiers who arrived in two army vehicles, fellow comedian Ngepyawkyaw said on his own Facebook page. Zarganar, 60, is a sharp-tongued satirist who has been in and out of prison since he was active in a failed 1988 popular uprising against a previous military dictatorship. He is also well known for his social work, especially arranging assistance for victims of Cyclone Nargis in 2008.

In the past week, the junta has issued arrest warrants for about 100 people active in the fields of literature, film, theater arts, music and journalism on charges of spreading information that undermines the stability of the country and the rule of law. It was not immediately clear what Zarganar, whose real name is Maung Thura, has been charged with.

Many ordinary protesters and activists are also being arrested every day, according to numerous reports on social media.

In Mandalay, the country’s second-biggest city, security forces used stun grenades and fired guns Tuesday to break up a march by medical workers who have defiantly continued to protest almost every day against the Feb. 1 coup that ousted the elected government of Aung San Suu Kyi. The army’s takeover set back Myanmar’s gradual return to democracy after five decades of military rule.

A participant who asked to remain anonymous for his own safety told The Associated Press that doctors, nurses and medical students were attacked as they gathered at about 5 a.m. by security forces who also used cars to run into protesters on motorbikes. The online news site The Irrawaddy reported that four doctors were arrested.

At least 570 protesters and bystanders, including 47 children, have been killed in the crackdown since the takeover, according to the Assistance Association for Political Prisoners, which monitors casualties and arrests. The group says 2,728 people, including Suu Kyi, are in detention.

U.N. spokesman Stephane Dujarric said U.N. officials in Myanmar are “deeply concerned” about the impact of the continuing violence on the country’s health system, pointing to at least 28 attacks against hospitals and health personnel since Feb. 1. And they are also concerned at violence against the education system, pointing …read more