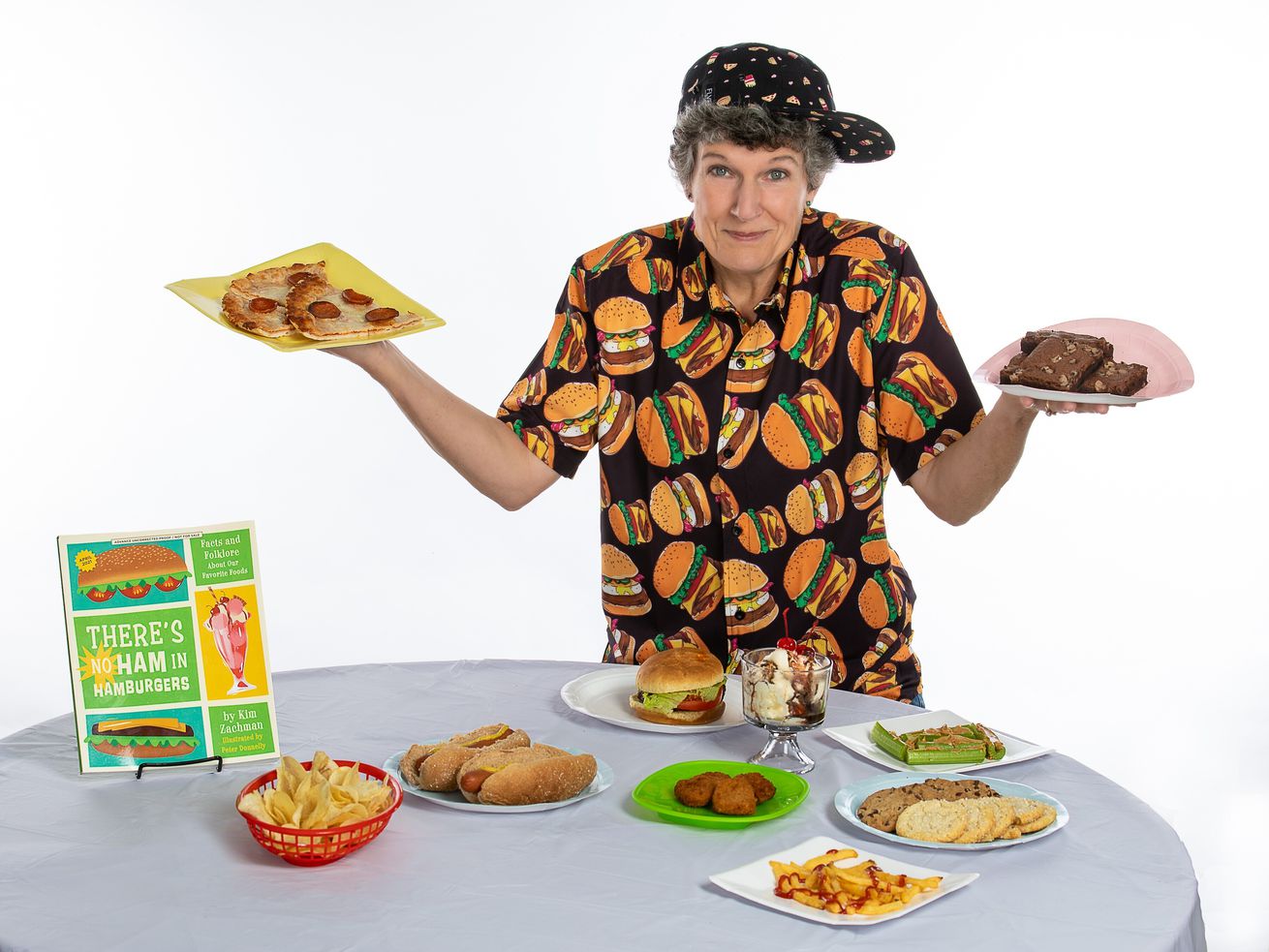 Author Kim Zachman poses with her new book There’s No Ham in Hamburgers,” and plates of food in Roswell, Georgia, in 2020. | AP

Kim Zachman’s book for young readers, “There’s No Ham in Hamburgers,” offers kids ages 8 to 12 a fun-filled journey through the history of some of their favorite foods.

NEW YORK — Legend: Genghis Khan came up with an early concept for hamburgers that involved tenderizing meat scraps under the saddles of horses as his Golden Horde ransacked its way to China back in the 13th century.

Fact: Nobody knows for sure who first came up with putting beef patties between bread.

Such bite-size anecdotes are among the truths and folklore included in “There’s No Ham in Hamburgers,” a new book that serves up the history, science and geography behind a myriad of foods beloved by kids. Burgers and fries are represented, along with chocolate, peanut butter, chicken, ice cream and all that sugary cereal so many parents love to hate.

A history buff and promoter of reading for pleasure in schools, author Kim Zachman in Roswell, Georgia, wrote the playful, informative food dive for youngsters ages 8 to 12.

AP
This photo shows the cover of “There’s No Ham in Hamburger” by Kim Zachman and published by Running Press Kids. The book, out April 6, details the origins of peanut butter, chocolate, chicken nuggets and other popular kid fare with a nod to the science and folklore behind them.

“I wanted to write history for kids and I wanted it to be really fun,” she told The Associated Press. “I was trying to think of ideas and I was out walking my dog one day, and I was like, why is there no ham in hamburgers? I’d always kind of wondered that. That’s when I found so many great origin stories.”

Some, she said, are untrue or unprovable. She also collected facts on nutrition and health, and included simple recipes and a single science experiment on how to extract iron from fortified cold cereal. The latter involves pummeling cereal into dust and then hovering a powerful magnet above the mess.

‘See the chapters that still have to be written’: San Jose man’s redemption held up as testament to landmark prison-reform law

stock.adobe.com
In her new book, author Kim Zachman writes Oreo cookies were a copy cat of the Hydrox sandwich cookie.

Zachman, mom to two daughters in college, doesn’t shy away from murky origins or multiple claims to innovations in her book, published by Running Press Kids. Nobody knows, for instance, the meaning behind the name Oreo, but one thing’s for sure: The Nabisco treats were a copy cat of the Hydrox sandwich cookie, which hit the market four years prior, in 1908.

“It was surprising to me how little we actually know about the origins of some of these foods,” she said. “We really don’t know for sure who made the first hamburger. Several people claim to have done it.”

At least 3 killed, many hurt in boat capsize off San Diego