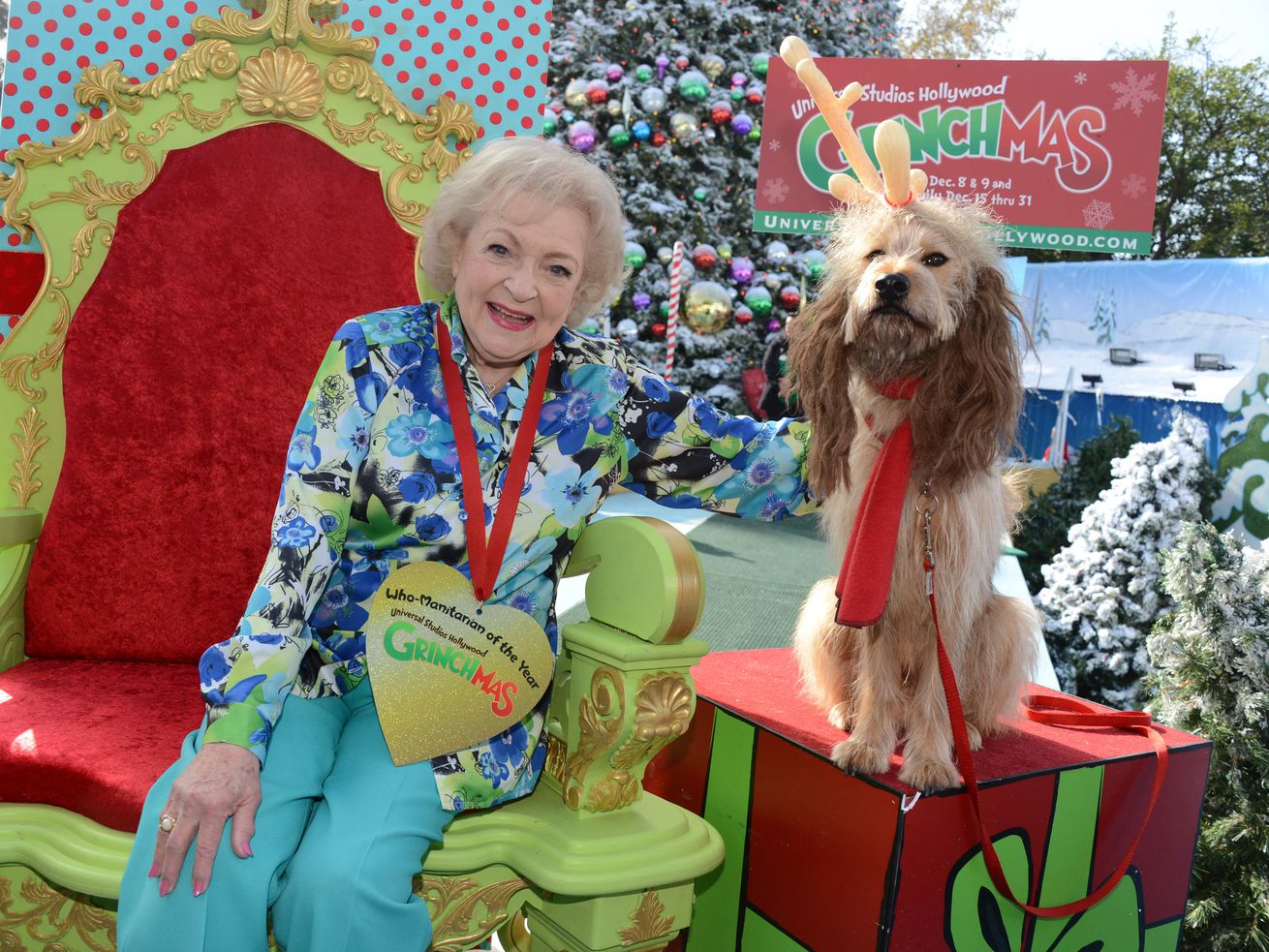 In this file photo taken on December 06, 2012 Actress Betty White poses with “Max,” the Grinch’s canine sidekick, at the preview opening of the “Grinchmas” holiday celebration, at Universal Studios Hollywood in Universal City, California. White, who passed away on Dec. 31, was a lifelong animal lover/animal rights advocate. | ROBYN BECK, Getty Images

White’s hometown will proclaim Jan, 17 as “Betty White Day,” while Twitter challenges everyone to help raise funds in her name on behalf of animal shelters everywhere.

The late actress, who passed away on Dec. 31 at her Brentwood, California, home, was born in the Chicago suburb on Jan. 17, 1922. And though she and her family moved to the West Coast just a year later, White often spoke fondly of her Oak Park roots and would return to visit family members.

In her honor, “Betty White Day” will be officially commemorated in Oak Park on Jan. 17, which would have marked her 100th birthday. The celebration, which will reportedly become an annual event, this year falls on the official holiday honoring Martin Luther King Jr.

The official proclamation will be delivered on Saturday (Jan. 15) at a special memorial/celebration of White’s life hosted by Oak Park village president Vicki Scaman. The free, public event takes place starting at 10 a.m. under the marquee at the Classic Cinemas Lake Theater, 1022 Lake Street. The event will also include remarks by Oak Park River Forest Museum historian Frank Lipo; a performance of “The Golden Girls” theme song by Cindy Fee, the original vocalist; “Be Like Betty” balloon photo opps; birthday cake courtesy of Turano Baking Company; and a pet adoption event at 10:30 a.m. sponsored by the Animal Care League.

The Super Bowl is actually this Sunday in Kansas City

“Oak Park is not quite St. Olaf but we are proud to be Betty White’s real hometown,” said Lourdes Nicholls, the event organizer, referencing the fictional Minnesota home town of White’s Rose Nylund character on “The Golden Girls,” in a statement on the village of Oak Park’s website.

TMZ and People.com report there will be various discounts and specials offered by local businesses to celebrate White. According to People, Mickey’s Restaurant (525 N. Harlem) will be offering a special on a hot dog, fries and diet coke meal (White’s favorites).

White’s 100th birthday also is being celebrated on social media with the Twitter hashtag #BettyWhiteChallenge. Fans are asked to donate $5 (or more) to local animal shelters or rescue organizations in her name, or if possible to adopt a shelter pet. White famously championed care and love for all animals.

In a 2012 interview with Smithsonian Magazine, White revealed her love for animals was born in …read more

Golden Globes 2021: The Complete List of Nominees | Entertainment Weekly
Ali and MLK, not always allies, shared opposition to Vietnam War: ‘It cost them both dearly’