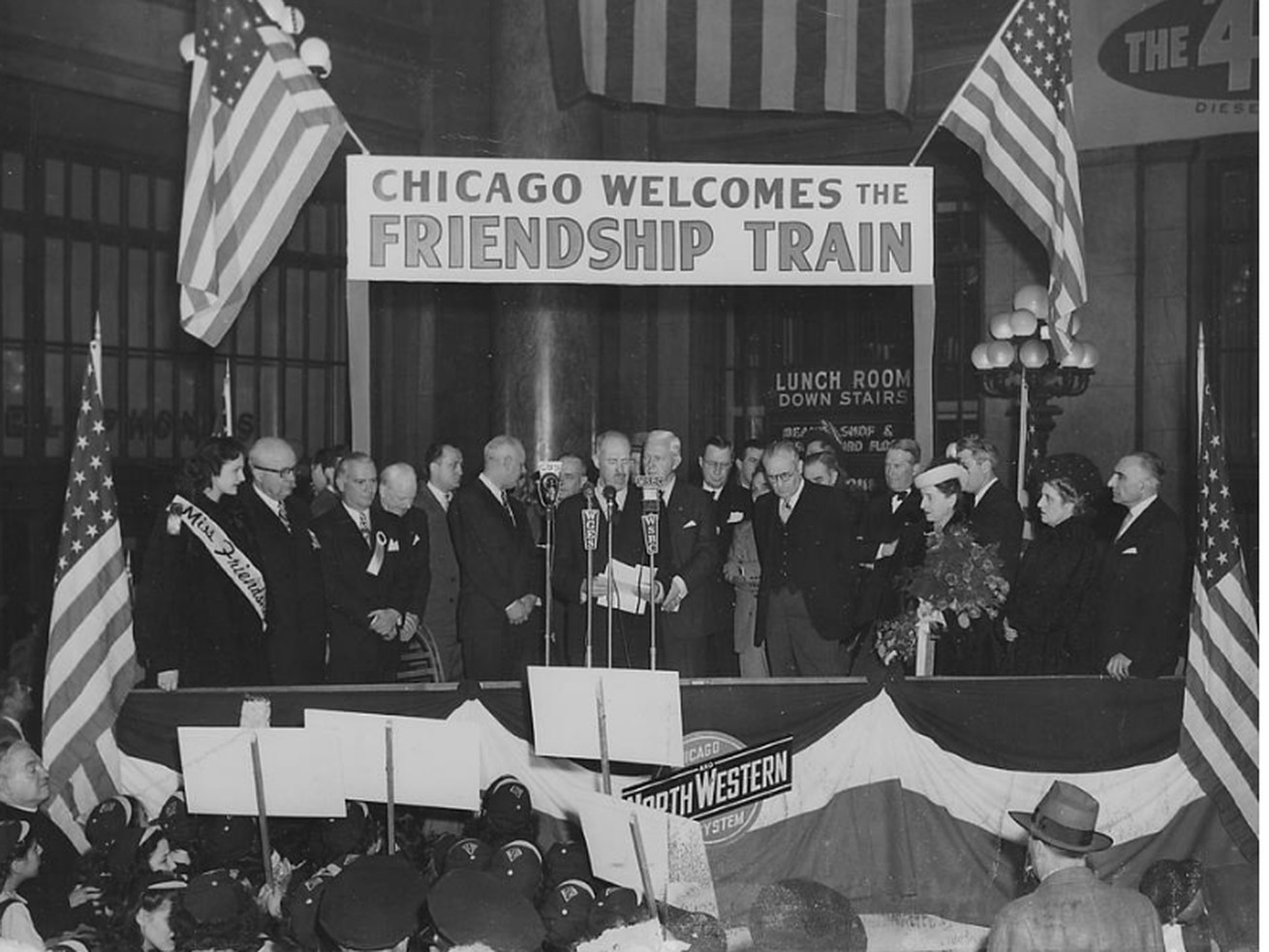 Chicago was a stop on the Friendship Train that collected food donations to feed the hungry in war-torn Europe. It was a chance for Chicago residents to contribute to world peace by fighting hunger. | Photo courtesy of Chicago and North Western Historical Society

Forty-three countries are facing severe food crises. We need both the public and the government to take action.

What were people in Chicago doing in 1947 during the Thanksgiving holiday? They were fighting world hunger.

It began when The Friendship Train arrived at the Northwestern Train Station on Nov. 14. This train was started by the American people in response to a major hunger crisis in Europe. While Europeans were still reeling from the devastation of World War II, a severe drought had struck that summer, leading to food shortages.

President Harry Truman spoke to the nation several times about the urgency to feed the hungry. Americans responded with the Friendship Train, which ran from coast to coast collecting donations of food for Europe.

According to Friendship Train historian Dorothy Scheele, Chicago donors added at least 21 more boxcars of food. There was also lots of cash donated, which would lead to more food for Europe. Chicago and Illinois were major contributors to the train. A week later, another part of the Friendship Train rolled into Chicago on its way to the East Coast.

With the American people leading the way on feeding the hungry with the Friendship Train, Congress was encouraged to pass an interim food aid bill for Europe in December.

16 Muppets who moved to “Sesame Street," from Ji-Young to Abby Cadabby

They were other hunger fighting initiatives ongoing too. The Thanksgiving week food drive by Catholic Relief Services collected donations at churches nationwide. This food helped feed Europe and other areas, too.

On Thanksgiving Day in 1947, families in Chicago and elsewhere set aside empty plates at their table, representing one of the world’s hungry. A donation was then made to CARE to feed their “silent guest.” CARE food packages were sent by the thousands to Europe thanks to the “silent guest” plan.

These actions by the public and government bolstered Europe’s recovery from the war and allowed the 1948 Marshall Plan to succeed. They remind us of the power of American generosity and the true meaning of Thanksgiving: “Giving Thanks by Giving.” It was this food that gave Europe the hope and strength to rebuild.

The most desperate countries are Yemen and Ethiopia, where war has led to famine conditions. In Afghanistan, conflict, instability, drought and COVID-19 have combined to …read more